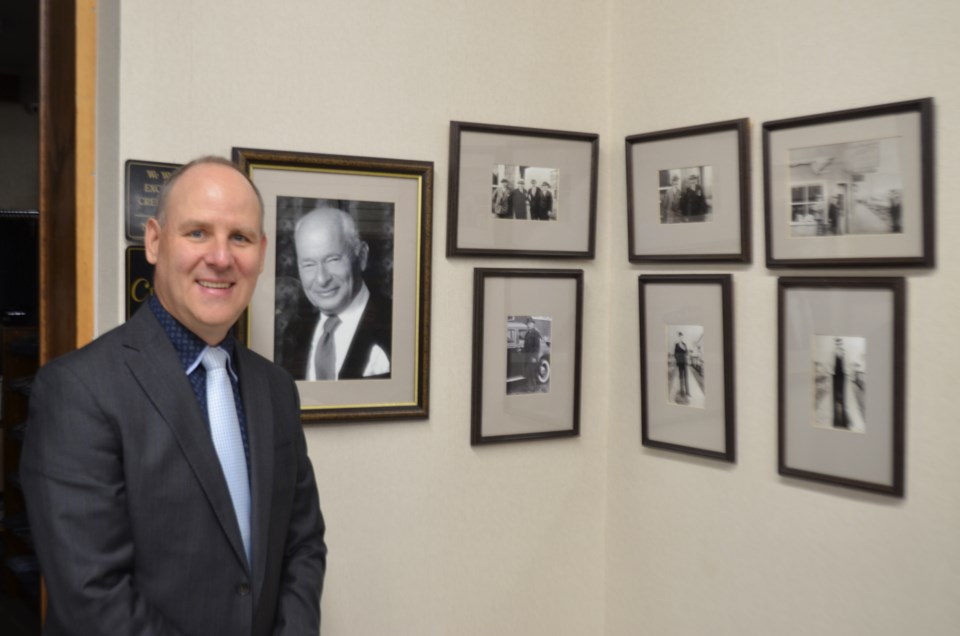 Darren Taylor stands next to a photo of his great-grandfather, Max Steinberg, the founder of Steinberg & Mahn Ltd. The Timmins store celebrated its 100th anniversary in 2019. (Wayne Snider for TimminsToday)

In 1918, Max Steinberg arrived in Timmins from Montréal, looking to start a new life. More than a century later, the German entrepreneur’s imprint is still going strong.

Upon arriving in the city, Steinberg launched a men’s apparel store, M. Steinberg & Company, before bringing on his friend, Joe Mahn, as a partner.

Today, Steinberg & Mahn continues to offer up the latest in men’s fashion.

“A lot of our ancestors came to Canada for opportunity, whether it be for mining, or lumber camps,” said Darren Taylor, Steinberg’s great-grandson and the fourth generation of the family to run the shop.

“Like a lot of people, they came to sell clothes to the miners and people in the lumber camps.”

At the time the store opened, dress was more formal, with men wearing suits, ties and hats on a daily basis.

That’s evolved over the years to what Taylor describes as a very casual approach to dressing. Most men only wear suits and ties on formal occasions – weddings and funerals primarily.

When Taylor took over operation of the store in the 1990s, baggy pants and big shoulder pads were the norm.

“I think menswear is alive right now,” Taylor said. “There’s a lot of fashion in a casual-type world where you can wear a crazy shirt with a wonderful jacket and finish it off with a nice, cotton pant or denim. This is what guys are looking for today.”

The business has had its challenges, not the least of which was the arrival of big box stores and, more recently, online shopping.

But Taylor believes the shop fills a niche with its hands-on customer service.

It’s not uncommon for a client to come in at 5 p.m. with just two hours to spare to find something to wear for a formal event that evening.

After serving many of the same clients – and generations of families – over several years, Taylor and his staff have developed personal relationships with many of them, a unique exchange he believes is lost through online transactions.

His shop focuses on high-quality apparel – well-made items that have classic appeal and will last for years.

That approach flies in the face of fast fashion, which encourages the purchase of cheap, quickly produced garments on a more regular basis. But with concerns mounting about the global environmental impact of large volumes of clothing being discarded, he believes that tide may be turning.

“You get what you pay for,” Taylor said. “If you buy something that's less expensive, chances are you're going to wear it handful of times and shoot it in the garbage. If you would have bought it right the first time, you wouldn't have to go back and forth a few times.”

As in other industries, Taylor said it’s been tough to retain top talent. People don’t always want to make a career of working in a retail environment, and many are lured to mining by the promise of high salaries.

But the shop has been fortunate to maintain a small group of trusted employees over the years who have become extended family.

Together, they hope to carry on the Steinberg & Mahn name well into the next century.

“We're thrilled and honoured that we've been able to be part of people’s lives and look after them and service them properly.”

Keeping comms open in one of the world’s deepest mines
Feb 10, 2020 9:27 AM
Comments
We welcome your feedback and encourage you to share your thoughts on this story. We ask that you be respectful of others and their points of view, refrain from personal attacks and stay on topic. To learn about our commenting policies and how we moderate, please read our Community Guidelines.