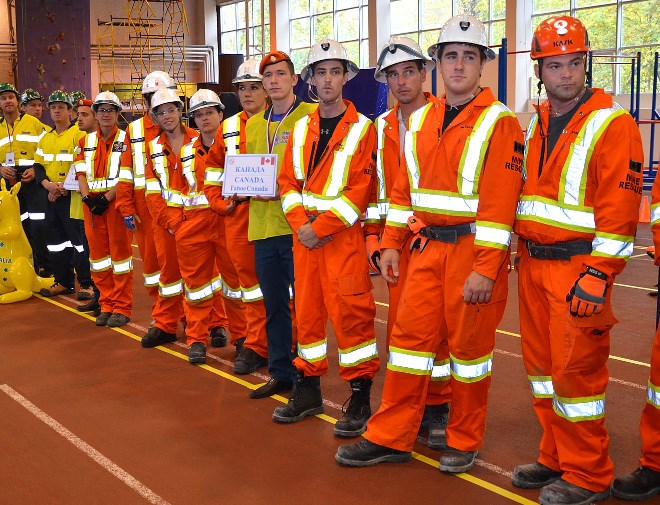 Tahoe Canada’s mine rescue team competed in the 11th annual International Mine Rescue Competition in Russia in September. (Supplied photo)

Tahoe Canada’s mine rescue team was named the fastest and came in 18th place overall during the 2018 International Mine Rescue Competition.

The Tahoe Canada team, comprised of Tahoe Resources workers from the Timmins West Mine and Bell Creek Mines, earned the right to compete internationally after coming in first place overall during the provincial competition in Matachewan in July.

Prior to its provincial win, the team won first place overall in the Timmins District challenge.

Participants were challenged to demonstrate their knowledge in a number of practical and theoretical areas of mine rescue, including a mine rescue simulation, firefighting, first aid, a theory exam, a mine rescue relay race, a virtual reality scenario, and technician contests.

A second Canadian team – the all-women Diamonds in the Rough, comprised of members from across the country – earned 15th place overall.

The International Mine Rescue Competition takes place in a different jurisdiction each year.

The friendly competition is an initiative of the International Mines Rescue Body, which encourages the exchange of mine rescue information between countries to improve overall safety in mine operations.

Sudbury hosted the competition in 2016. The next international competition will be held in Bogotá, Columbia, in 2019.

Nickel hunter primed for step-out exploration on its Timmins property
Oct 1, 2020 1:00 PM
Comments
We welcome your feedback and encourage you to share your thoughts. We ask that you be respectful of others and their points of view, refrain from personal attacks and stay on topic. To learn about our commenting policies and how we moderate, please read our Community Guidelines.