A new century of mine production 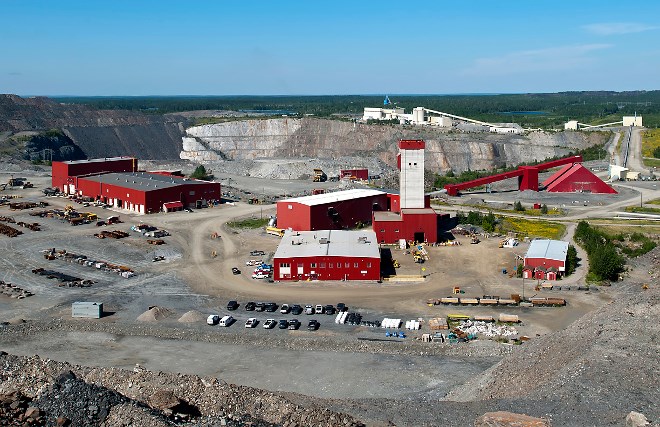 Porcupine Gold Mines-Goldcorp is entering the prefeasibility stage of a new open-pit gold mine in Timmins in hopes of extending its presence in the mining camp.

As Porcupine Gold Mines (PGM)-Goldcorp’s mining reserves become more depleted in Timmins, the company is embarking on a new project to take its operations into the next century.

The proposed Century Project would expand the original Dome open-pit operation, which was mined between 1996 and 2004, to the northeast, and operate for 10 or more years.

PGM’s Dome underground and Hollinger open-pit mines have limited resources left, and so the Century Project is a way for the company to extend its longevity in the Timmins camp, said Marc Lauzier, general manager at Porcupine Gold Mines (PGM)-Goldcorp.

“If we just stay with the one underground concept, then at some point we’ll disappear; we won’t survive,” he said.

“If we want to be economically viable and if we want to continue to contribute to Timmins, we need projects like this to make that happen, and so this is just an example of some of the ideas we have to take PGM into a second century in the Timmins camp.”

Dome underground mine has been in operation since 1910, but its reserves are dwindling, and Hollinger is set to shut down by 2019. That leaves PGM with the Hoyle Pond underground mine and the processing facility, which is fed by all three mines.

PGM has just completed a conceptual analysis of the Century Project and is entering prefeasibility, which Lauzier expects to take about 18 months.

Details will be hammered out during this stage, but Lauzier said the mine is expected to have a life of more than 10 years.

Much of the existing infrastructure — including shops, offices and the Dome headframe — will have to be dismantled to make way for new infrastructure to accommodate the larger size of the new pit. PGM will also have to construct a new mill, as the current facility can only process 12,000 tonnes of ore per day.

“This size of pit is comparable to a Detour pit or a Malarctic-type open pit, and we’re looking at much bigger tonnages,” Lauzier said.

“Our numbers are three or four times that, and so we would need to build a new processing facility as well.”

But the company intends to stay within its current footprint, with no plans to step out from property it currently owns.

Lauzier said the geotechnical drilling currently underway is the most sensitive part of the project. It will help the company figure out details such as the angles of the walls, which will determine the size of the pit and, in turn, the profitability of the operation.

“So this geotechnical drilling is probably the most critical part of the prefeasibility study, just to figure out exactly what those final pit walls will look like, and what the shape of that pit will look like, which will determine how much gold there is to help pay for the project.”

Lauzier said the company will also look for innovative and environmentally sustainable technology to implement at the new mine that will help reduce greenhouse emissions and improve tailings handling processes.

Goldcorp’s Borden mine in Chapleau, being developed as an all-electric mine, is an example of methods the company can use to improve on its environmental footprint.

It’s still too early to determine what kind of workforce will be required; however, Lauzier said an early estimate suggests that the company may look to sustain its current workforce as opposed to bringing on new hires.

Dome underground will be approaching the end of its life as the Dome pit nears development, and so employees from the underground operation may simply continue on at the new operation.

If the concept gets approval in prefeasibility, it will move on to feasibility, which Lauzier estimated would take another 18 months, and so it would be roughly 2022 or 2023 before the project reaches fruition.

Lauzier noted that the company is continuing to explore for new mineralization across its vast property, which stretches up to Chapleau and to the Québec border.

“Every year we try to replace the ounces we mine, and we look for bigger projects that will be a step-change for the company,” he said.

In the meantime, Hollinger, which is expected to operate until 2019, is proving to be a good project for PGM, Lauzier added. The property had long been an eyesore in the community before PGM announced plans to resume mining there in 2012.

Hollinger, which will operate until 2019, has allowed PGM to sustain more than 100 jobs, mine some gold, and make some money before reclaiming the land and turning it back to the city, Lauzier noted.

“I think we still have good support in the community and I think it's a good project for Timmins,” he said. “When you look at what was there before and what we're going to be able to return to the community in a few years, it's a significant change and, I think, a good thing for the community.”