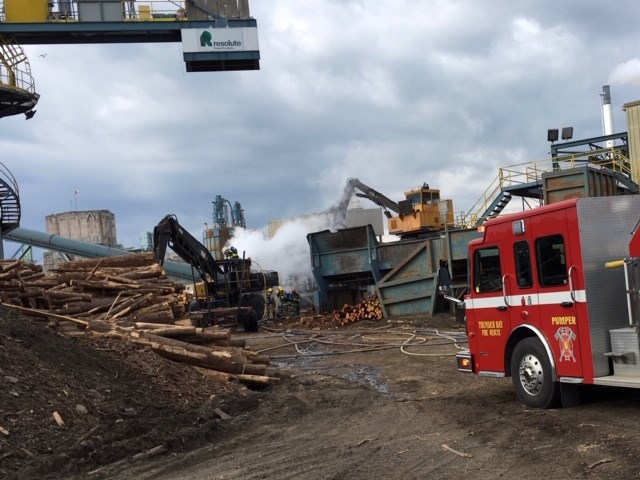 A larger loader was extensively damaged after fire broke out at the Resolute saw mill in Thunder Bay, June 29.

According to Thunder Bay Fire Rescue, the cause of the fire is believed to a mechanical overheating issue in the engine compartment of the loader.

The incident occurred just after 9 a.m. when fire rescue responded to a report of a large loader on fire near the main building at the saw mill.

Crews from three pumper trucks and a command vehicle encountered a log loader fully engulfed approximately 14 meters from the main part of the building.

Resolute staff reported the operator of the vehicle was uninjured and was able to exit the loader before the fire grew out of control.

The fire department deployed multiple 45-millimetre hand lines to prevent the fire from spreading to the nearby structure and a large wood supply.

Fire Rescue said due to the large volume of fuel and hydraulic fluid in the vehicle, the fire was difficult to extinguish.

Meeting the COVID-19 challenge 'head on'
Jun 22, 2020 4:17 PM
Comments
We welcome your feedback and encourage you to share your thoughts. We ask that you be respectful of others and their points of view, refrain from personal attacks and stay on topic. To learn about our commenting policies and how we moderate, please read our Community Guidelines.