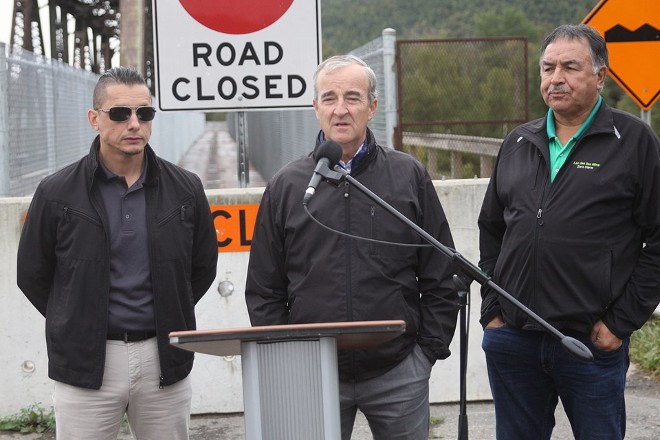 An exasperated Fort William First Nation Chief Peter Collins wants the City of Thunder Bay and CN Rail to toss aside the legal acrimony and work on a solution to restore vehicle traffic on a duel use bridge that connects the two communities.

“We’re a victim as we were 113 years ago and we’re still a victim today,” said Collins, referencing a 1905 land grab when 1,600 acres of reserve land was expropriated by the former town of Fort William and the Grand Trunk Pacific Railway for economic development purposes.

On Sept.18, Collins and Fort William CEO Ken Ogima delivered a forceful message to media and the public in front of a concrete barrier placed by CN to block vehicle traffic at one end of the century-old swing bridge that spans the Kaministiquia (Kam) River.

Known as the James Street Swing Bridge, the CN-owned structure was damaged by fire in October 2013 in an act of vandalism.

It remains open to freight trains and pedestrians but not to vehicle traffic, a major cause of concern for the First Nation community of 981 on-reserve residents.

An Ontario Court of Appeal ordered CN in June to reopen the bridge based on a 1906 agreement signed between the then-Town of Fort William and the Grand Trunk – later absorbed into CN – requiring the railway to provide citizens with access to the bridge in perpetuity.

CN is appealing that decision to the Supreme Court of Canada.

Frustrated by the back-and-forth litigation, Collins said he was not out to bash either party but wants them working together to find common ground.

With the bridge off limits to vehicles, motorists have to reroute to Highway 61, turning a two-minute trip into the city into a 15-minute ride.

Collins said Fort William has been inconvenienced by longer emergency response times and rush-hour congestion, and he harbours concerns about public safety on a highway frequented by logging trucks.

A restoration of bridge access, he said, would boost traffic into the Westfort business district of Thunder Bay and better serve 1,000 people from Thunder Bay that commute to industry and office jobs on the reserve.

“It’s a solution from taking this thing from the courts to repair the access,” he said.

“The ACROW bridge is not your grandfather’s World War Two Bailey bridge,” said Scott, in explaining the history and the evolution of the military truss design.

The prefabricated structure they manufacture can reach a span of 85 metres (275 feet) and meets the 75-year design life of the Canadian bridge codes and Ministry of Transportation standards.

“We heard about this situation so we got in contact with Chief Collins and we’re very pleased to participate in this process of getting this crossing opened again,” said Scott.

If given permission, Scott said bridge components can be delivered in four to eight weeks, with assembly and installation taking about a month, regardless of weather.

To do that, Fort William First Nation will have to get permission from CN to use part of the swing bridge’s infrastructure as a foundation for the Bailey bridge.

After investigating other sites along the river, Collins said the swing bridge is best location.

Constructing a standalone conventional bridge costs $25 million, plus the time it would take to secure funding, do an engineering study and the environmental assessment.

A Bailey bridge would cost between $5 million and $8 million and can be placed upon the swing bridge’s foundation without nearly the amount of government red tape.

Collins said he’s discussed the concept with CN, which has told him to get support from the City of Thunder Bay.

Collins said he’s not looking to the City of Thunder Bay for a financial contribution; he’ll look to CN, Ottawa and Queen’s Park for funding. Those discussions have already started.

But the city said it must first get support for the concept from the road authority.

The City of Thunder Bay released a supportive letter, saying it understands the four years of frustration of Fort William First Nation members.

But the municipality gave no indication it intends to drop its legal case against CN, expecting the railway to honour its inherited 1906 commitment.

The Sept.18 release mentioned that although Fort William has shared the Bailey bridge proposal with CN, the city has not received any information on this concept.

Mayor Keith Hobbs said an Ontario Court of Appeal ruling was clear that CN is responsible for whatever repairs or upgrades are necessary to reopen traffic.

“Thunder Bay and Fort William First Nation have been impacted for far too long," Hobbs said. "This bridge is an important connection between our communities. We call upon CN to do the right thing and fix their bridge.”