When Shelby Ch'ng gave up a good-paying desk job to open up a bridal boutique, her friends thought she was crazy. They didn't think much of her choice when she located in Thunder Bay's gritty south end business core.
Dec 5, 2013 7:33 PM By: Ian Ross 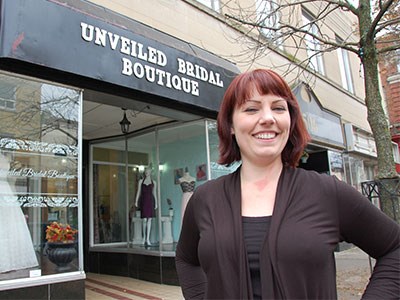 When Shelby Ch'ng gave up a good-paying desk job to open up a bridal boutique, her friends thought she was crazy.

They didn't think much of her choice when she located in Thunder Bay's gritty south end business core.

“I think it's a great place for new businesses to cut their teeth and get started,” said the first-time entrepreneur who's filled one of the many empty storefronts in the former Fort William business district.

The shop’s refinished wood plank floor came from the Port Arthur Armoury where her grandfather once paraded.

“That's what sold me on the place. It has so much history.”

While millions of dollars have been pumped into the city's north end to revitalize its waterfront and beautify its streetscape, blocks of Thunder Bay's south core look and feel like a Rust Belt city.

It's become an epicentre for vandalism, arsons, stabbings, public drunkenness and despair among its many improverished inhabitants who live on the street, in subsidized housing and a nearby shelter.

Ch'ng finds many customers are leery about frequenting her store on dimly-lit Victoria Avenue.

“I have evening appointments with brides. Some don't get here until 8 or 9. It's nerve-racking for them when they come to the shop.”

She's installed a security system, displayed a No Cash sign, and leaves the lights on at night. But there are always visible signs of the evening nightlife.

“There are the broken bottles and one morning I came in and there was someone's pants in the tree outside my store, during the winter.”

Still, Ch'ng doesn't see the negatives, only the downtown's potential with its historic buildings and cheap rent.

“This place here is a sense of freedom for me from the desk and doing mundane things.”

Since opening her shop a year ago, Ch'ng discovered a tight-knit business community and takes solace that many of her neighbours are women entrepreneurs.

“It's just ourselves down here and sometimes it feels like god has forsaken us.”

But better street lighting would attract more small business and customers, she said.

James Murray, owner and editor of the Thunder Bay NetNewsledger, a popular online community news site, has taken a personal interest in revitalization with a grassroots effort.

He recently moved his operation from the city's north side into a walk-up studio space on Victoria Avenue, a few blocks from city hall, a new district social services office, and where a massive consolidated courthouse is under construction.

“I came down because this is where the action's happening.”

Fort William is the heart of civic government and Thunder Bay's swelling Aboriginal population, but the south core is also the homefront for poverty and addiction.

During a walking tour, Murray shows vacant lots and a waterfront park littered with discarded mouthwash and hairspray bottles, rumpled clothing and cardboard where the homeless have bedded down behind an abutment.

Dozens of needles, distributed through an exchange program, are scattered on a public dock at Kam River Park, the users neglecting to use the yellow disposal bins installed in alleyways.

Toting a camera bag, Murray's been documenting and videotaping the alcohol-fuelled street brawls and signs of decay, but he showcases hopeful signs where developers are repurposing landmark buildings into loft apartments, office and retail space.

“This part of the city is really affordable and there's a lot going on. Not to say we put on rose-coloured glasses...but it's the power of small business here and that really fuels the economy.”

“The reality is we need everyone to step from all organizations in the city and say, what are we going to do about this?” said Murray.

While Thunder Bay's north end is the branded entertainment district, the south core has evolved into a busy government administrative hub.

But after 5 p.m., when the bureaucrats clear out for the day, the vibe on the street changes.

“The druggies and drunks almost wait until the business day is done so they can come out,” said Serge Berube, owner of a May Street vacuum cleaner shop.

Berube took up his landlord's offer of no lease and moved in four years ago.

“I'm glad I did it, but we have to get something done with the mayor and police to get more evening traffic.”

Loiterers from the homeless shelter, unruly patrons from a certain drinking hole and crime reports only add to the negative public perception of the downtown, he said.

“A lot of customers won't come down here, so I do free pickup and delivery.”

Berube would like grants made available to fill vacant offices and storefronts, and a general cleanup to make the area more attractive.

Mike Larissa, a commercial property manager, doesn't think the Fort William business core has been neglected by the city and feels the city has been responsive to his needs.

The manager of RFL Holdings owns Centennial Square mall and the 100-yearold Chapple Building, an office complex filled with lawyers, doctors and other professionals.

“I've never had an incident where I felt scared.”

Larissa admits his location on Syndicate Avenue shields him from many of the problems.

“Some people are scared to come down here and that's something you don't want.”

Larissa is planning a $1-million facelift of the Chapple's facade next summer, but was hesitant about making the capital improvements.

“I wasn't going to invest in this building and somebody smashes a window. I'm not going to have my tenants suffer and have an unprofessional environment.”

“Myself and Counc. Joe Virdiramo have called it a ghetto and we need to clean it up plain and simple.”

Hobbs remembers the south core being a bustling place until the hulking Victoriaville Mall was built in 1980. It severed Victoria Avenue and put the downtown into a steady decline.

“Not only has it been a traffic nightmare, but it hasn't been great for the city.”

Hobbs and city manager Tim Commisso met informally with a group of business owners in early November to listen to concerns about street lighting and a greater police presence.

“Police have beat patrols during the daytime, but crime is happening at night.”

Hobbs intends to meet with police, but the city is also tackling the social issues that have plagued Thunder Bay for years by launching initiatives and strategies targeting poverty, crime prevention, anti- racism, affordable housing and a youth centre.

He understands south-end residents would like to see a similar urban strategy as the north side waterfront and business district.

“What we've done with our north core has been totally the opposite. It's vibrant and thriving and there are only two buildings empty where once there were dozens.”

Hobbs hopes once the courthouse opens in 2014, a different dynamic will take over Fort William.