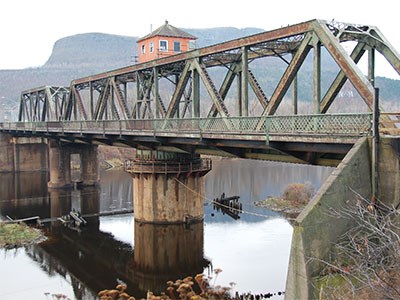 CN Rail expects to begin repair work this spring on an historic swing bridge to reopen the span to vehicle traffic.

The City of Thunder Bay and the railway had been awaiting word if the Supreme Court of Canada would hear the railway's case over a century-old contractual obligation to maintain and keep open the James Street Bridge, which connects the city with neighbouring Fort William First Nation.

Both parties were notified that the court will not hear the case.

The CN-owned structure was damaged by fire in October 2013 in an act of vandalism. Within days, the dual-use span was reopened to freight trains but barricaded to vehicles.

The City of Thunder Bay sued the rail carrier to honour a 1906 agreement signed between the then-Town of Fort William and the Grand Trunk Pacific Railway (which later became nationalized as the Canadian National Railway), to keep the bridge open to traffic in perpetuity.

The resulting litigation and appeals process worked its way up to Canada’s highest court.

The railway has argued in the past that the structural repairs for the bridge to permit vehicles is beyond the scope of its maintenance obligation.

“Over the past months, CN has sought proposals to re-open the bridge. The successful bidder will be confirmed in the coming days and the work is expected to begin in the spring.

“While CN continues to consider options to get further clarity on its long-term obligations, none of these options will impact CN’s decision to proceed with that work.”

“With this decision, CN has run out of options to delay,” said Thunder Bay Mayor Bill Mauro in a March 28 statement.

“CN has failed to convince the highest court in Canada to allow a further appeal. CN must fix its bridge and reopen this important connection between Thunder Bay and Fort William First Nation.”

The company took the Supreme Court route following a ruling last November from the Court of Appeal of Ontario, dismissing CN’s request to stay - or postpone – an earlier appeals court decision from last June, ordering that the bridge be fixed and reopened after CN blocked access to vehicles five years ago.