Vale in it for the long haul, says COO 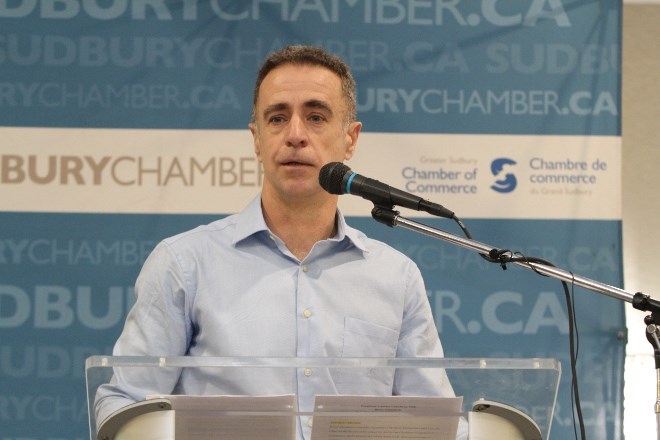 Ricus Grimbeek, Vale's chief operating officer for Canada, the U.K. And Asian refineries, told the audience at the Greater Sudbury Chamber of Commerce luncheon on Jan 10 Vale had a long-term plan to keep mining nickel in Sudbury.

The mining industry is rapidly moving toward digital technology, and Sudbury could be at the heart of it with careful planning, said Vale's Ricus Grimbeek.

The chief operating officer for Canada, the U.K, and Asian refineries was the guest speaker at a Greater Sudbury Chamber of Commerce President's Luncheon Series on Jan. 10 at the Radisson hotel.

His message was clear: Vale has a decades-long plan to stay in the region, as well as help the city become the global hub of digital mining as it transforms the industry.

“I was talking to somebody and they said they thought there was maybe five good years of mining left here, and asked what I thought and I said, no,” he said. “They asked if it was less or more.”

For Vale, he said the mining company is looking at least 20 to 30 more years of production in the basin alone.

And oddly enough, climate change is going to help spur that sustainability with the increased demand for battery electric vehicles.

He predicted 15 to 20 million vehicles being on the road in the next five years.

That demand is going to continue to increase as cities and countries change their infrastructure to adapt to the new technology.

Other renewable energy technology, such as windmills and storage facilities, will further drive the need for nickel and copper.

Whenever people think about the large batteries needed to power vehicles, lithium comes to mind immediately.

Grimbeek said most of the battery material needed will contain mostly nickel and some lithium.

“There's been a huge boost in the lithium shares because of the lithium batteries, but they haven't looked at the chemistry,” he said. “A small electric vehicle requires about 40 kilograms of nickel for the battery. That's a lot.”

Mining, itself, is changing rapidly as it moves toward digital transformation. More operations are being executed by automation and artificial intelligence.

Mines are also being planned with sustainability and minimal environmental impact as part of the plan.

This will be an advantage for Sudbury, due to many of the local mining service companies already producing products that are digitally-based or running on batteries.

The city also has a long history of deep hard-rock mining that other countries and multinational corporations are now taking interest in.

Along with that are the success stories coming from 40 years of remediation and metal recovery research, as the region cleans up the environmental damage of its historic mining legacy. With that knowledge and rapid change comes a need for education.

Laurentian University, Cambrian College and Collège Boréal, along with high schools and trade schools, are showcasing the diversity of the industry in training a new generation of miners.

A major challenge facing the industry is the boom and bust nature of nickel, he said.

Prices have stagnated for the past four years and experienced a decrease in recent weeks.

Grimbeek said investors tend to be “gun shy” over the commodity because of its previous financial history of being touted as a booming metal, then having it falter quickly.

Sudbury has the advantage of being the top global producer of high-grade nickel, known as Class 1. To make a battery, Grimbeek said only Class 1 nickel can produce the nickel sulphide required to dissolve nickel into the acid.

Grimbeek said he has always had a passion for environmental protection, safety and sustainability; something he brought with him from his decades working in South Africa and Australia. He chose to join Vale and move to Canada because of that.