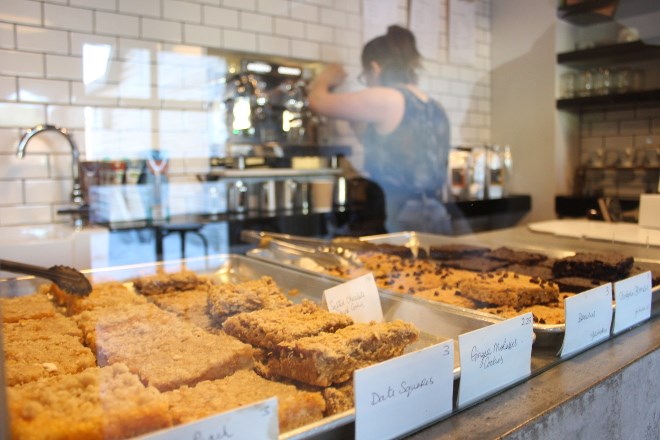 Isabella Scola-Lawryshyn fills an order at Beards, a Sudbury bakery where the owners have put into place a new profit-sharing model for employees.

As of Jan. 1, employees at a Mexican restaurant and bakery in Sudbury are getting a piece of the pie, or maybe the quesadilla, when it comes to the company’s profits.

Owners and spouses Mark Browning and Jessica Nadel not only welcomed the rise in minimum wage to $14, they complemented it with the introduction of a profit-sharing model for their two small businesses: Tucos, a small, vegan Mexican restaurant, and Beards, a vegan bakery.

“I expect each and every staff member to walk around like they own the place, and they pretty much run the place on their own without a lot of top-down management,” said Browning.

“For that, they deserve to share in its success and failure. Ultimately, if your staff aren’t happy in their work, your business will fail. One of my primary concerns as an owner is how to make them as happy as I can.”

That’s not to say Browning is entirely hands off.

He and Nadel built much of the restaurant and bakery themselves to save money, and he spent his Friday nights in the dish pit for Tucos’ first few months.

The two entrepreneurs have been paying their staff “a little more” than minimum wage since their early days, so the rise in minimum wage wasn’t as difficult for them as it was for some others.

But they wanted to do something more to maintain the higher-than-minimum wages the staff were already receiving, and that’s when Browning happened upon profit-sharing.

“I did a lot of calculating and figuring. It’s a bit of a trial-and-error process, and it’s still fluid. None of the formulas are set in stone yet,” said Browning.

Each month, he calculates the profit the restaurant has made and divides it amongst the staff based on a system of “pools” in a process similar to calculating and distributing tips.

As owners, they receive 50 per cent of the profits, but the other half is divided among staff based on their experience and level of responsibility.

On months when they run a deficit employees still receive their regular wages and tips, and the two restaurateurs absorb the risk.

“Trick is, don’t have bad months!” joked Browning. “We all have to work hard at that and stay relevant.”

Browning said he was partially motivated to introduce profit-sharing by his own outlook on business, which he describes as “not-profit-driven,” and partially by the fact that he hopes it will actually improve business.

“The nice thing about doing this is that, in effect, you're making the staff owners, so they're motivated to reduce waste and maximize sales,” said Browning.

There’s a precedent for using profit-sharing as a way to boost sales and improve employee retention and engagement: Canadian Tire and Starbucks both employ some variation of a profit-sharing model.

Charles Cirtwell, president and CEO of the Northern Policy Institute, likes the idea.

“It’s a way to both encourage loyalty to the company and, the theory goes anyway, to promote increased customer service and pride in the organization, and increased revenue.”

While the hike in the minimum wage has come on too fast for some businesses, he’s encouraged to see companies exploring alternatives.

“It will be interesting to see if over the long term they’ll be able to sustain their staff levels and whether staff will see their wages grow,” said Cirtwell.

“But, I think this is the beauty of having multiple types of businesses. With this approach it allows an entrepreneur to find a new creative way to respond.”

So far, Browning said it’s been a resounding success, but he’s open to change.

“It's hard to project with only one month as an example so far, but last month was good,” said Browning.

And how are the staff at Tucos and Beards taking the shift?

“So far I think they love it,” said Browning. “January was a great month for us and they were all pretty stoked to get some extra money.”