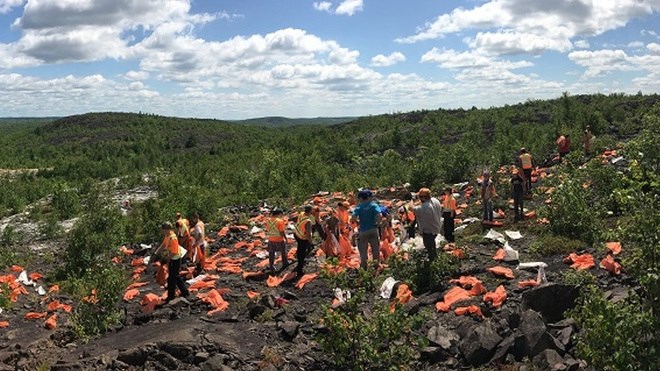 The program, launched in 1978, put the city on the map as an environmental leader in miraculously transforming the area from a mostly tree-less moonscape to a lush landscape.

In that four-decade span, more than 3,400 hectares of barren land has been treated with crushed agricultural limestone and almost 10 million seedlings have been replanted by the city’s Regreening Program.

Continuous improvements in smelter technologies and processes since the early 1970s by the city’s major mining companies resulted in extensive reductions of sulfur dioxide and heavy metal deposition to the environment.

These reductions worked in tandem with municipal regreening efforts to allow the ecological recovery to begin on the roughly 80,000 hectares of affected land.

The anniversary was celebrated at the Northern Water Sports Centre in Sudbury on May 1.

"Over the last 40 years, this program has enabled thousands of residents and stakeholders to get involved and to play a role in the regreening of our community," said Greater Sudbury Mayor Brian Bigger in a statement.

"This program is a point of pride and continues to improve the quality of life that we enjoy. The results have been so successful thanks to the collaboration among many of our partners including the Government of Canada, the Government of Ontario, local mining companies and many private sponsors.”

But, there is still a considerable amount of work yet to be done with over 30,000 hectares of land that remain unrestored. We are proud of what we’ve accomplished and continue to forge ahead by building on the great work that’s already been done.”

To celebrate the milestone, VETAC, city council’s advisory panel on regreening, will offer trail tours of some of the reclaimed areas in May, June, August and September.