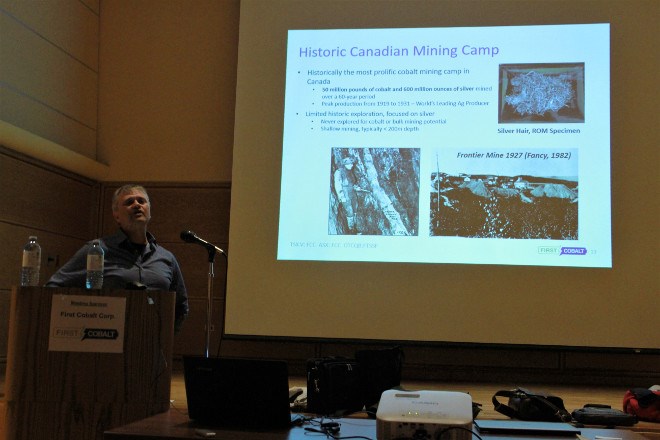 Frank Santaguida, vice-president of exploration for First Cobalt Corp., hosted a talk at the monthly meeting of the Sudbury Prospectors and Developers association regarding the company's Cobalt Camp operations. The company released their latest findings on the historic silver mining area, as well as their plans for a 2018 drilling program.

The land around the town of Cobalt, despite the name, was once one of the richest silver finds in the nation.

Decades after that boom ceased, another one is on the horizon, this time for the town's namesake.

As demand for electric vehicles grows across the world, one company is taking a second look at the cobalt resources that were once thrown away.

First Cobalt Corp. gave a Jan. 16 presentation in Sudbury on their latest findings and plans to drill on several properties they purchased near Cobalt, many of them historical silver mine sites, to determine the scope and quality of the cobalt resources.

Frank Santaguida, vice-president of exploration for the company, led the discussion, which included everything from the history of the community to the challenges of accurately mapping resources in areas where material was moved from one location to another.

“What we are presenting here is the work we've done in the past year in the Cobalt Camp,” he said.

He described the presentation as an open discussion on the learning process over this last year. The team and company has been learning how to explore the area geologically, find old cobalt deposits where there used to be silver, and discover new veins and resources.

For the history aspect, Santaguida talked about the history of the area, when 50 million pounds of cobalt and 600 million ounces of silver were taken from about 100 different mines in the area over a 60-year period, with the peak between 1919 and 1931. At the time, he said mining operations were focusing on following the silver veins, and operations were very shallow, about 200 metres below surface.

It is eerie at times, he said, to be in an area that was once home to more than 10,000 people during the silver boom's peak.

Within the property First Cobalt owns, there are 50 previous producing mine sites. In the entire camp, he said, there are 115 old sites.

A lot of the work has involved looking at old data on the area to determine where to drill. By targeting some of the old veins, he said they are finding new vein systems. They have also been digging through old tailings in pits, trenches and muck piles to find leftover cobalt.

Recently, the company announced they are going ahead with a $7-million drilling program that will involve more than 26,000 metres of drilling on 13 different targets. These areas include the Kerr, Drummond, Juno, Ophir, Hamilton, Silver Banner and Silverfields mines in Cobalt North, the Caswell mine in Cobalt Central, and the Bellellen, Keeley and Frontier mines in Cobalt South.

“Our goal is to find locations where there are enough of these veins where we can develop a mine,” he said.

According to a news release, regional mapping and prospecting programs will start in the spring and run through the summer and fall throughout the camp with emphasis on Central Cobalt.

One of the bonuses with working in the area is it is mining-aware. Santaguida explained they don't have to look very far when they need support in their endeavours, from contractors to excavation. The drilling company they are working with is based near the camp as well.

Going forward in 2018, he said the company is concentrating on drilling projects,

A major selling point for the location is the political and economic stability of the country it is located in.

Santaguida pointed out that currently about 46 per cent of the world's cobalt is sourced from the Democratic Republic of the Congo (DRC), which has a reputation for being politically unstable, and companies have a lot of difficulty in working there.

Among the issues is the government's need for taxes, so they recently imposed a 10 per cent tax on the mining industry. As well, there are issues with environmental and safety practices.

Canada, he said, doesn't have those problems.

“We get a lot of attention and credit for trying to develop what may be a critical element in a stable country, and not in a jurisdiction that doesn't necessarily follow best practices for the safety of their employees, like what is happening in the DRC,” he said. “There is a lot of demand for clean cobalt.”