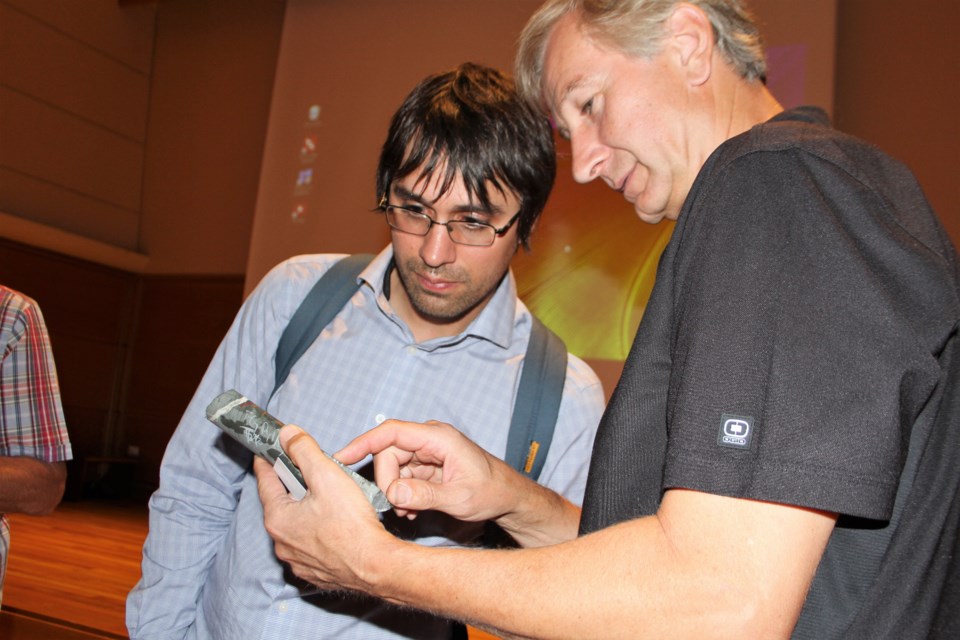 Long-abandoned mining camps in Northern Ontario are proving to be far from dead.

Two historic mining camps – the Thunder Bay silver district and an emerging gold camp on the outskirts of the town of Wawa – are proving to contain plenty of resources decades after they were believed to be mined out, or contained nothing significant.

Jean-François Montreuil, chief geologist for Honey Badger Exploration and Red Pine Exploration, gave a presentation on the respective properties, the Thunder Bay Polymetallic Silver Project, and the Wawa Gold Project, at a monthly meeting of the Sudbury Prospectors and Developers Association on Sept. 18.

The Thunder Bay camp, 25 kilometres west of the city, holds a special significance, as it is the home of 12 past-producing mines that produced 1.67 million ounces of silver and sits on one of two known silver-bearing geologic belts in the area.

The presentation concentrated on the company's silver-cobalt Beaver Property, which contained four historic mines including Beaver Silver Mine, which produced about 500,000 ounces of silver.

“The grades Beaver Silver Mine they were going after were extremely high. The cut-off for mining was 1,000 grams per tonne,” Montreuil said.

The results of their spring drilling program in that area were released in late August and showed an abundance of silver and cobalt beyond the original mine workings and extends at depth.

Drilling showed multiple zones of near-surface cobalt and high-grade silver over a possible strike length of 45 metres, including 1,254 grams per tonne silver over 1.2 metres in one core sample alone.

The 1,525-metre program was the first ever to target the mine from surface.

“An added bonus is the cobalt and silver are devoid of arsenides,” Montreuil said. “We were shocked to see so little.”

They were picking up argentite – a mineral consisting of silver sulphides – in the core samples, native silver and finding amethyst crystals dusted with the mineral.

The results suggest there is potential for the discovery of shallow high-grade silver mineralization in the vicinity of the other historic mines in the district. Cobalt mineralization is also possible near past producing silver mines on Honey Badger’s land package.

The best part of the Thunder Bay property, Montreuil said, is it hasn't been explored for the past half-century.

For a background, Montreuil related the general history of silver mining in the Thunder Bay district.

The first strike was recorded in the 1840's by the founder of the Geological Survey of Canada, Sir William Logan. Several extremely high-grade native silver finds were discovered shortly after. Mining continued until about 1893 when silver prices crashed. Many mines were largely abandoned.

The discovery of the Cobalt camp in 1903 drew attention away from Thunder Bay.

Honey Badger went into the district looking for something similar to the mineralization found in the Cobalt district. The geology is very similar, he said, plus the history of high-grade silver finds in both camps.

In the immediate future, the company is completing a systematic surface sampling program around the 12 historic silver mines on the property to test the potential of new silver and cobalt mineralization.

“Much of it remains unexplored. There's a lot of work that awaits Honey Badger in that district,” Montreuil said.

At Red Pine Exploration, it's a similar story of an old mining camp, but this time it's gold.

The company acquired the Wawa Gold Project, a 5,568-hectare package just two kilometres southwest of the town. Similar to Thunder Bay, this area contains multiple historic mines that once produced a combined 120,000 ounces of gold.

Since November 2014, Red Pine has performed 40,000 metres of drilling. Much of their work has involved re-analyzing historic data which was either incomplete or inaccurate.

Some of the samples taken from the 1960's to the 1980's were recorded as having zero gold at the time. Part of this was due to targeting a narrow quartz vein.

"We know many of those zeros are artificial. We know these zeros have a very strong impact on the resource," Montreuil said. "In some of the sheared material, we found 22 grams per tonne at one metre. So we know there is high-grade material in there. There are 0.5 to two grams per tonne in that material as well."

Some of the historic holes cannot be analyzed because they were drilled decades ago and the core boxes are in terrible condition. For that, the company will do confirmation and infill drilling.

The company is putting together a resource model to re-estimate the Surlaga Deposit, the largest deposit on the property with more than a million ounces of gold in the inferred category.

Infill drilling on the property has been encouraging, he said. At the old Surluga Mine, one core sample showed about five grams per tonne gold (g/t) over eight metres.

One good discovery has been confirming the Jubilee Shear Zone is part of multiple gold-bearing structures, proving the Wawa gold corridor is a very large system. Red Pine is planning on taking a bulk sample from its Minto Mine South Zone.