Mining gurus to be acknowledged at spring convocation 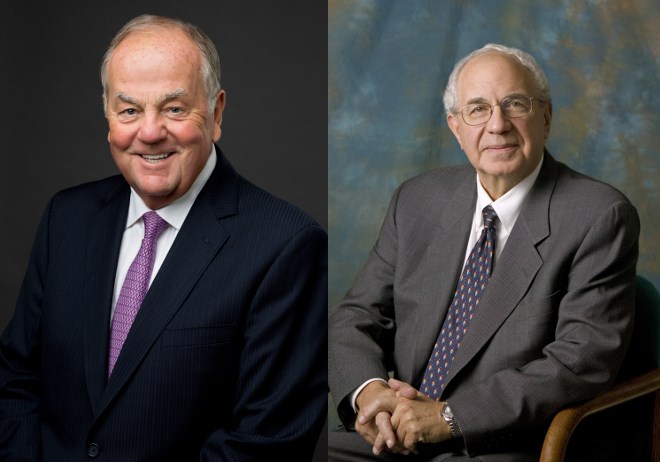 Terry MacGibbon (left) and Ned Goodman will be recognized for their achievements in the mining industry with honorary doctorates from Sudbury’s Laurentian University. (Supplied photos)

Terry MacGibbon and Ned Goodman will receive honorary doctorates from Laurentian University this spring for their contributions to the mining industry and the Canadian economy.

MacGibbon has been an important member of the Laurentian community and a driver of economic prosperity in the region and around the country.

After retiring from Inco Ltd. (now Vale) with over 30 years of service, MacGibbon grew FNX Mining Company, then an obscure junior explorer, into a multi-billion-dollar producer and one of the country’s greatest mining success stories.

In 2010, MacGibbon helped orchestrate a $1-million donation from FNX’s successor, Quadra FNX Mining Ltd., to support Laurentian’s then unnamed school of mines. MacGibbon made a further impact at Laurentian by chairing the university’s $65-million The Next 50 Campaign from 2011-2013. The funds raised and connections made under his leadership continue to support a wide array of institutional priorities.

MacGibbon has served in leadership roles with a variety of mining companies, including Torex Gold Resources, INV Metals and TMAC Resources. He has been a strong advocate for more progressive approaches to mining, including creating more opportunities for women to enter the industry, particularly at the executive level. He is a member of the Canadian Mining Hall of Fame and has received many other prestigious awards over the course of his career.

Over his five-decade-long career, Ned Goodman, founder of Dundee Corporation, earned a reputation as one of Canada’s most astute and respected investment leaders.

A trained geologist, Goodman successfully financed many of the country’s most successful junior mining companies whose operations created jobs for thousands of people in Northern Ontario and around the country.

He and his family have made some of the most significant private philanthropic investments in Canadian history, including multi-million-dollar gifts to support health care and education. In 2012, the Goodman family made a transformational gift to support Laurentian’s excellence in mining-related education, and created the Goodman School of Mines.

In recognition of his charitable endeavours and the many contributions he has made in strengthening the national economy, Goodman was named as a member of the Order of Canada in 2016. He was inducted into the Canadian Mining Hall of Fame in 2012, as well as the IIAC Investment Industry Hall of Fame in 2017.

Laurentian University is based in Sudbury.