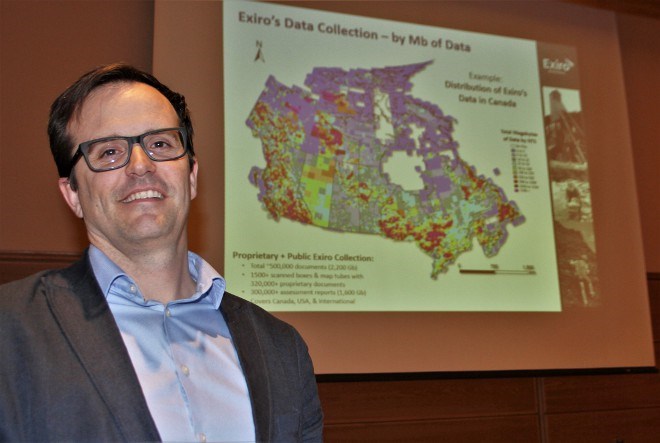 Joshua Bailey, COO and director of Exiro Minerals, stands in front of a map of all the digitized public and proprietary data by megabytes, with a pixel representing a national topographic system map sheet, demonstrating which parts of the country have been mapped the most for mineral resources.

That's why his company, Exiro Minerals, has made it part of its business to gather up as many as it can to preserve the accumulated information to get an accurate record of the nation's wealth.

The COO and director, who is also the past president of the Sudbury Prospectors and Developers Association, talked about the wealth of information Exiro has amassed and how it's helped with their projects at the monthly meeting of the group on March 19.

While it may seem redundant to take a second look at old records, Bailey said, the data they contain is critical, especially as the mining industry moves toward digital platforms and artificial intelligence.

“Machine learning is determined by the quality of the data being applied to it,” he said in his presentation. “Everyone is talking about artificial intelligence. We work with human intelligence.”

Bailey added they are intrigued with artificial intelligence and its potential, but said he predicts it will be a long time before it can be used on a regular basis.

The value of paper data is the amount of time people put into gathering it, often in remote camps and spending long hours logging it onsite.

For Exiro, he said, the ultimate goal is to find the high-quality structures they can mine in the future.

The company has amassed a large collection of paper data, and it is developing processes and software to glean over it quickly to find new opportunities.

Exiro makes digital copies of the paper files in exchange for a copy for themselves, taking on the costs.

Much of that data, Bailey said, was destined to be destroyed or used as backfill, as it was deemed out of date.

Last September, Exiro opened a subsidiary in Mexico for scanning and logging. All their digitized files are a blend of proprietary and public records for an accurate reading.

As of now, they have processed about 1,500 banker boxes worth of information.

Exiro recently signed a deal with a mid-tier mining company to scan several hundred boxes of project evaluation files from the past 10 years.

The beauty of it is often, like mining, those files can contain a critical piece of information that could point to a once-forgotten claim or overlooked deposit.

They have sold several claims, with royalties, to other mining companies using this data.

Bailey pointed out that this addressed the perception that exploration is decreasing. Often the exploration aspect of mining gets cannibalized for other projects, to the detriment of the company and mining in general. Financing for mines is set up for a short-term turnaround, while exploration is incremental and takes a long time.

The belief has always been that the 'easy' deposits have been found and there's little left to find.

The company's core belief is that there were never any easy deposits.

“Even 400 years ago, people were wringing their hands over declining discovery rates and there were very few new deposits left," Bailey said. "This shows there is plenty out there and exploration still has a lot to offer to help find those deposits."

It doesn't help that statistics show about one in 3,000 claims actually become a profitable mine.

Part of the problem is much of the exploration has been delegated to junior miners, which focus on more incremental discoveries because of short term pressure to deliver news releases.

This is where having information collected becomes important, as the data can help companies find new discoveries and claims.

Discovery is the ultimate creator of wealth and profit, all else is de-risking, Bailey explained, and they are using the data to help others, and themselves.

The company is also looking at a property in northwestern Ontario, near Pickle Lake, thanks to the accumulated data.