A well-known Sudbury eyesore could be returning to its past glory, if an ambitious redevelopment plan is successful.
Jun 20, 2014 1:07 PM By: Darren MacDonald 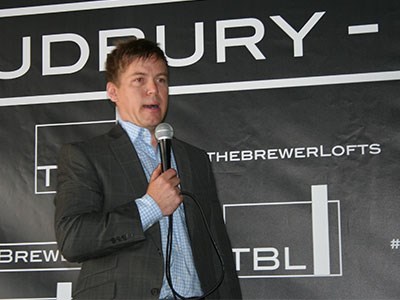 A well-known Sudbury eyesore could be returning to its past glory, if an ambitious redevelopment plan is successful.

Developer Greg Oldenburg, who grew up in Sudbury but lives in Toronto, unveiled plans June 19 to transform the historic Northern Breweries property in the city’s west end into a residential and commercial space.

Oldenburg wants to put 50 loft-style condominiums in the building, along with commercial and communal spaces, including an art gallery, a wedding hall, a bakery – even a bowling alley.

“I'm not sure why this building was available for so long,” Oldenburg told hard-hat clad reporters gathered inside the building for the announcement. “Fundamentally, the building is in good shape.”

The building has largely been unused since Northern Breweries closed in 2004, despite efforts in 2005-2006 to save the business. The exterior has deteriorated considerably since then, and while it was sold in 2010, the buyer was unable to find a way to make it viable.

It has languished since then, and former city councilor Joe Cimino said he and others had been working for years to find a way to restore the area – without success. So when Oldenburg called him eight months ago, he didn't know what to think.

“When he called, he didn't really say what it was about,” Cimino said.

“He just asked to meet at the corner of Victoria and Lorne (streets.) He told about his vision – the vision he talked about today – and I was very excited.”

Oldenburg said replacing the building would cost about $40 million – and he got it for less than the $850,000 price it was listed for. Renovating the site will cost in the neighborhood of $12 million.

“I got incredible value,” he said. “This thing is worth tens of millions of dollars to replace.”

A major selling point will be the unique features for most of the lofts. Out of the 50 units, Oldenburg said there could be 30 different floor plans. The ceilings are between 12 and 25 feet high, and windows will be installed along many of the brick-covered walls – of which there is an abundance. There will be a keg and a tap in every loft, a nod to the building's brewing history. They will be living spaces like no other in the city, he said.

His target market for the roughly $450,000 lofts are seniors and young professionals who want to own, but don't want to take care of a house. He also expects some buyers will want to rent their lofts, seeing them as a long-term investment.

He's offering incentives to buyers who commit before the end of 2014, including a free parking spot.

“By this time next year, we're aiming to have enough money for construction financing,” he said. “(First) we need 50 people to step forward and say they want this to be part of their life … We can't move forward without that commitment.”

“I am thrilled,” Thompson said. “When Greg came along with this project, I said this is exactly what the city needs. He's got the vision, and the financial resources behind him to be able to do it.

“This is going to be a transformational project for our city.”

While this isn't the sort of redevelopment project that has been done in the past done in Sudbury, she said, but are more common in Montreal and Toronto. It preserves a part of the city's heritage, while giving new life to what was a crumbling structure.

“This building is over 100 years old, it links us to our past,” she said. “People genuinely appreciate (that Oldenburg is preserving the building.) You get a better sense of Sudbury's history.”