Bestech developing smart technology to put configuration back in users' hands
0
Mar 6, 2019 8:00 AM By: Karen McKinley 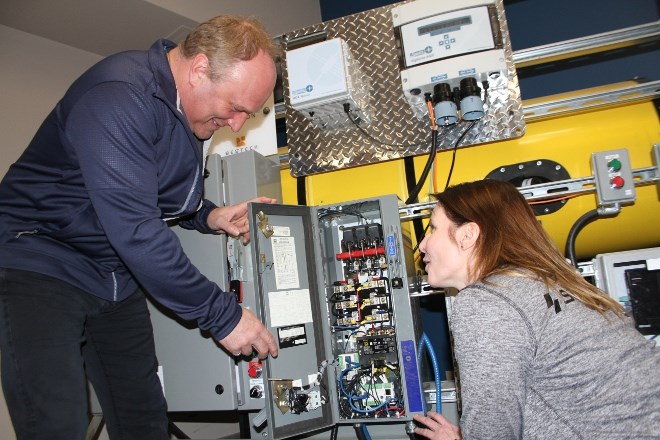 Marc Boudreau, CEO of SHYFTinc and Bestech, points out components in a control box for a starter fan system that is being run on AutoGen, a program that allows a parson to configure a computerized machine and make changes to its programming quickly. (Karen McKinley photo)

Not long ago software for computers needed to be installed by experts, or have the user spend many hours doing it themselves.

With the invention of apps and plug-and-play technology, programs that configure themselves and can be customized are at the literal fingertips of users and can be installed often within minutes.

That ease-of-use technology is finding its way into the mining industry as automation becomes more commonplace.

In Sudbury, SHYFTinc. is applying this technology to ventilation, and CEO Marc Boudreau says the possibilities are almost endless.

Known as AutoGen, the platform is designed to allow the in-house experts to re-gain control of their own systems instead of having to call experts whenever it needs to be repaired or re-configured.

Doing so will make it easier for people to adopt technology, which will make the operation more efficient and safer.

“What used to take two days of programming now can be done within one minute,” he said. “You can code it yourself, there's codes associated with that controller, and you can now control and monitor that fan with the interface,” he said in an interview.

That is the power of AutoGen. It allows a company to build a system quickly, and reconfigure it quickly. The programming is done. All they need to do is adapt it to what they need.

Initially, AutoGen was developed by sister company BESTECH, which moved its research and development division to SHYFTinc. It is now marketing and continuing to develop AutoGen.

He explained for now, AutoGen is being used in fans that supply ventilation to underground mines. Those fans are already configured to a programmable logic controller, which is a computer designed for rugged manufacturing. The fan has to be engineered to work off of the controller. A computer is plugged into the controller and a technician can program the fan to perform a task.

Right now to program fans, software has to be written, programs installed and the controller is unaware of what it is plugged into or even running.
What Bestech is doing is developing apps that can be pulled out of the cloud, of which will be a fan operation program, it will automatically know what kind of fan it is, will know it is connected to a controller, and there will be a specific code for that controller.

Currently, anything that runs on software needs what is known as a peripheral, which is any device that is used to put information into, or get information out of a computer. That could be anything from a keyboard, to a mouse, to a hard drive tower.

The invention of plug-and-play was born out of this, Boudreau explained. Anything that runs on a plug and play platform has software already installed. It needs to be plugged into a device, then it detects what it is plugged into and starts configuring itself based on parameters.

Bestech wants to bring this technology to the industrial level.

“We want our clients to install their devices in the field, and have a system recognize those devices are present, understand what those devices are and put enough configuration into the system so someone can start using that device right away,” he said.

AutoGen could be perfect for mining in several areas due to how mines develop and evolve. A mine is constantly changing, and as it does, its needs and components change. Staying with fans, Boudreau said a mine could have up to 300 fans, which are moved around on a weekly basis. They would need a system that could be easily configured to benefit from automation.

The platform is already being used in the fans at Totten Mine with Bestech's ENRG1-ECO ventilation control system. Boudreau says they are getting good feedback from the users, along with suggestions to tweak it.

He related his time when he worked at Falconbridge Mine. The mine has large booster fans at surface that sends air down, then auxiliary fans that move the air to zones, then more booster fans to pull the air up and suck it back out. When one of the fans goes down, a sequence of events required for all the fans to work breaks down.

The company would sequence fans to run on an automated system, but after a few months they stopped using the system due to a fan being taken out of service.

“They would say they would just turn them on and off by themselves, the person does the automation, |Boudreau said.

This is why he felt a program like AutoGen is needed. To keep systems running, people can troubleshoot themselves and rely less on specialists like him.

Bestech is designing and making the programs available through Amazon Web Services for ease of use and downloading.

They are working to apply this to big, complex machines with multiple systems that work together. These machines also do not plug into any port.

“We are applying it to ventilation now, because that is what we are known for, but we are working on programs for other areas,” Boudreau said. “It's not like a remote control, where it is already configured. With AutoGen and plug-and-play, you decide how you are going to control it, and make a routine that will turn that plug on and off. You don't have to think about how they are communicating.”