Don't be surprised when you first meet Tim Warren if he asks whether you know a good cook. But it has to be one who is able to do a bit more than create some tasty dishes.
Jun 15, 2011 3:36 PM By: Liz Cowan 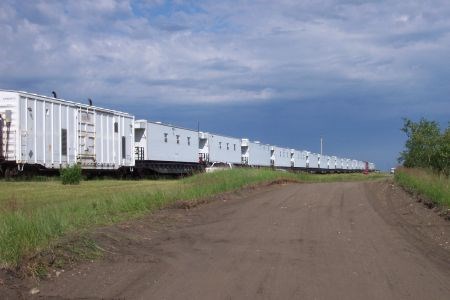 North Star Frontier, a logistical suppler and remote camp operator, is on a hiring blitz to expand its workforce in catering to resource sector clients.

Don't be surprised when you first meet Tim Warren if he asks whether you know a good cook. But it has to be one who is able to do a bit more than create some tasty dishes.

As president of North Star Frontier Services, based in Val Caron, he said finding the right personnel can be a challenge for the company that provides remote site services.

“It does take a special breed of person to do this work,” he said. “They are working in the bush and they can put in long hours.”

His business partner, CEO Craig Bayless who is based in Chicago, said there are some other perks along with good pay.

“There is a forced savings plan,” Bayless said via Skype. “There is nowhere to spend the money while you are working.”

The company provides catering, housekeeping and management for clients such as construction, hydro, mining and railway companies who require remote camps. Warren spent 16 years with a railway company, in charge of track maintenance, before deciding to strike out on his own. When an opportunity arose to take over catering and management of 10 camps along the railway lines between Capreol and Armstrong, he made the move.

Over the years, the responsibility grew to include mobile suites with the railways and 10 years ago, he and Bayless joined forces to offer services to other clients.

“It's a unique business,” Bayless said. “We will do whatever our clients want and we go anywhere across the country. But the biggest challenge is logistics and personnel.”

The mobile railway bunkhouses, or boarding cars, operate in some of the most remote areas in Ontario.

“If you look on a map, you can see that the railway lines, between Capreol and Hornepayne and Armstrong, don't follow any roads or towns. It's all bush. So crews working there can't access hotels or restaurants. That's where we come in,” Warren said.

The railway bunkhouses are not owned by North Star Frontier, but they do provide the catering and housekeeping. They are also on the move, sometimes as often as every second day.

Co-ordinating supplies to the mobile camps can prove to be a challenge. Sometimes food can be delivered to a railway crossing but other times it is delivered by a highrailer, a vehicle that can run on tracks.

“It all has to be co-ordinated when the trains aren't running so it could be any time of the day or night,” Warren said.

Work dictates where the bunkhouses will be, so sometimes arranged meetings for supplies have to be rearranged.

“We have good working relationships with our grocery suppliers,” Bayless said. “They are accustomed to delivering in the bush, down a bush road or away from the beaten track. They are an important part of our team.”

Wholesalers are used along with local suppliers from nearby communities.

“Our kitchens are on the move and we can't run out,” Warren said. “That is not an option. Nor can we have food expire before we get resupplied.”

There is no portion control for the meals since the crews are allowed to eat as much as they want.

For a railway work crew of about 70 people, four staff will be provided. For a crew of 30 or under, two are on duty. There is a main cook, a second cook and helpers and they follow a schedule of about 10 days on and four off. Staff can come from anywhere across the country.

“You know, just because someone works in a restaurant in Sudbury doesn't mean they want to go out for a month at a time and work in the bush,” Bayless said. “We have to be honest with people about what the working conditions are like. It is long hours and the working space is confined. But room and board is free and the pay is good relative to working in a restaurant in town.”

Warren said it is difficult to attract younger people because of the lack of connectivity they might experience.

“Young people can't be without their cell phones,” Warren said. “There is Internet available but it can be spotty.”

A washer and dryer are available on the boarding cars so crew can do their own laundry but towels and bedding are provided by North Star Frontier.

Stationary camps can have challenges as well, depending on how remote the location is. The company operated one that involved flying the supplies in which was costly.

“It's much easier to deal with a stationary camp than a mobile one,” said Bayless. “Even if there is 500 people there. The meal times are spot on, the kitchens don't have to move and getting supplies to the camp, for the most part, can be a lot simpler, even if it is remote. It's like running a banquet motel.”

North Star Frontier does not own any camp structures but it helps its clients obtain the modular housing they may require.

At the peak of its busy season, the company may have about 1,000 employees scattered throughout the country in various camps and railway bunkhouses.

But for those working in the remote areas, a hot meal at the end of a long day is a welcome treat.

“People who have to stay at these camps don't really want to be there but we try to make life pleasant by providing good food. After a 10 or 12-hour day, coming back to the camp or boarding cars to the smell of a home-cooked meal is really all they have to look forward to,” Bayless said.