Advice from the cutting edge 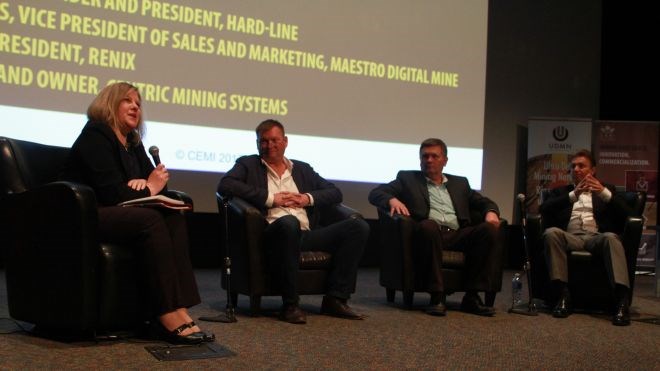 From left, Christine Haas, president of Renix, Chris Novak, president and CEO of Centric Mining Systems, Walter Siggelkow, founder and president of Hard-Line Solutions and Michael Gribbons, vice president, sales and marketing of Maestro Digital Mine, were the panel members during the discussion on innovation at the end of the CEMI 10th annual general meeting at Dynamic Earth. Each member offered their insight as company leaders and life experience to questions posed by audience members. (Karen McKinley photo)

The reasons for mining innovation are many, so it made sense to hear from many voices who have made a living from offering it as a service.

The Centre for Excellence in Mining Innovation (CEMI) held its 10th annual general meeting at Dynamic Earth Sept. 27 to a packed house eager to hear what the consortium had planned for the coming months. Along with board business and updates on new projects and products, the highlight was the panel discussion at the end featuring four people who have made a living offering cutting edge products and services to the industry at home and across the world.

Christine Haas, president of Renix; Chris Novak, president and CEO of Centric Mining Systems; Walter Siggelkow, founder and president of Hard-Line Solutions; and Michael Gribbons, vice-president of sales and marketing at Maestro Digital Mine comprised the panel, offering their insight to questions from moderator Dick DeStefano, executive director of Sudbury Area Mining Supply and Service Association (SAMSSA), as well as from the audience.

The talk focused on their experiences in the mining industry and the critical path innovators have to take to market a commercial product to the industry, as well as the need to export to stay afloat.

Haas, whose company uses ion exchange to decontaminate and purify materials like liquids and resins, said she works with resource-based industries, where their technology comes into play. She's seen a trend across those with shrinking grades and resources, fuel, environmental regulations and licensing.

“Those are causing a lot of challenges,” she said. “We have to make sure we are putting those into that context so organizations can understand what it is we have to deal with.”

Integration is already being embraced, but the challenge for her company is showing industries how they work.

Novak said with his company, the trick is to know how to solve the problem better than the customer.

“Don't put yourself in front of the industry, the individual that you intend to sell your product or service to, without knowing the problem and having the solution in place and being prepared to defend it better than anybody else.”

Over time, the company's confidence to solve a problem will be the selling point, no matter how it is solved.

Siggelkow said the mining industry is a very closed and tight-knit group of people. No matter where he goes, he always meets people he's worked with. He agreed that to be successful they have to have a product that solves a problem and it needs to be good, as well as be able to service it to keep it running.

“To be globally successful, it's all in networking, using contacts one makes in business to make headway in other jurisdictions,” he said.

Gribbons said many engineers make the mistake of creating a solution that is not needed.

“They are trying to sell an aspirin for a headache that isn't happening,” he said. “Smart engineers design things and there is no need for them; they've not been vetted by the client. We are so fortunate we have two major mining companies that co-operate with you. They either validate, or cut you down, and both are good. Our philosophy is: bring these people in early, show them the conceptualization and get their feedback, and go back to the drawing board.”

That way, there is a stage process that stops people from investing a lot of capital upfront for no reason.

DeStefano said that there is a lot of potential for the city to become an international mining intelligence centre. He had spoken to companies in Australia, Peru and South Africa that see the region as such. He pointed to statistics from 2004 and 2005 that had 25 companies. In 2016, there were an estimated 100 companies that are exporting aggressively.

Gribbons said that, due to their networking and aggressive marketing, he estimates around 50 per cent of their business is exporting. Much of that, he said, has come from hard work.

“It's not easy,” he said. “There are some markets you go after. I tried to handle Mexico. I live in Mexico six months out of the year and thought I'm a natural to sell in Mexico. I go, forget it; it's a whole different culture. Every market has its individual challenges.”

However, he said it's much easier to do business with Australians, Americans and Europeans because they think alike. They present a proposition, and can prove it they go with it. In Latin America, it's about the feeling, not the thought process. To operate in Mexico, they had to hire new staff.

Siggelkow said Hard-Line was lucky. They operated in Canada, helping to keep a mine in Baffin Island open, and then they received calls for similar problems in Chile and Honduras.

“I can't say how we did that on a cold start, but I will say that when you see an opportunity you go,” he said. “And it's typically not in your backyard. It could be. It's in Chile. You get that by going there like we did.”

Novak agreed with much of what was said, adding around 80 per cent of Centric's business has been outside of Canada. He stressed understanding the markets and knowing what it takes to get into them.

“It's about wanting to do it, being there, not just working on the telephone, as Walter said,” he said.

Haas said because they are new, they don't export yet, but they do work with four clients on an application. Three of them are from Europe and only one from Canada.

“That's a statement of early stage willingness to get involved in projects and innovations early,” she said. “But I agree that the culture and (understanding) the difference in culture is important to continue the partnerships. For us, partnerships are extremely important not only in industry, but geography as well.”