After sitting idle for two years, GR Truss is back in operation, heading into its second full year of production with an optimistic view of the housing market.
Apr 3, 2013 6:27 PM By: Lindsay Kelly 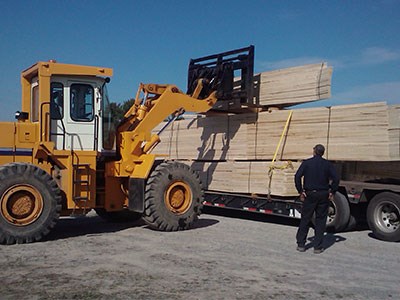 Trusses manufactured at GR Truss outside of Sault Ste. Marie are loaded onto a truck for delivery. Though the company has a small market share, it’s looking to expand its territory as it moves into its second full year of production.

After sitting idle for two years, GR Truss is back in operation, heading into its second full year of production with an optimistic view of the housing market.

“Generally there’s a feeling among the retailers that the North is looking pretty good,” said Gerry Greco, GR Truss’s president.

“Forestry is just about to rebound –there’s a lot of talk about that – mining is pretty solid, so among the builders and the stores, there’s a pretty good feeling about Northern Ontario.

"Even though we started on the low end of the economy swing, we see a good opportunity in the next five years or so.”

Established in 2006 by the Garden River First Nation, located just outside of Sault Ste. Marie, GR Truss produces roof trusses, open-web floor trusses, and interior and exterior prefabricated wall panels at its 11,680-square-foot manufacturing plant. The product is then sent to distributors across Northern Ontario and into northern Michigan.

Falling victim to the housing crash of 2007, the plant’s doors remained closed until Greco and a partner secured a long-term lease with the First Nation, resurrecting the plant in July 2011. During peak season, from May to November, the plant employs between 12 and 15 people, and there are plans to add a second shift this year, which should result in an additional three to four positions.

While the partners spent their first year working out glitches, Greco said GR Truss has hit its stride, aiming for slow growth as it expands the company’s territory.

“There are four or five facilities like us in the North, and we are one of the small facilities, as far as market share,” Greco said. “But we’re finding our niche right now; we’re focusing on quality.”

Initially, Greco found he was discarding up to 30 per cent of the lumber sourced from suppliers, but after switching to a premium product, only five per cent of the material is tossed. The high quality of lumber is gaining attention from contractors.

“We’re getting really good feedback from our framers,” Greco said. “Contractors are calling us and saying, ‘Your trusses are really nice; the wood is really good.’”

Though new to the industry, Greco said his background in marketing and advertising serves him well in his new role. Keeping clients and contractors happy – what he terms “old-fashioned customer service” – is integral to building up the business.

Last year, the plant was idled through the month of December, but with construction more commonly taking place throughout the winter months, demand is up, Greco said. Retailers are indicating the warmer months allow for construction to take place year-round, which has its advantages and drawbacks.

Employee retention is good, and year-round production offsets his overhead, but transportation in the cold weather presents its own set of challenges.

Transportation, and the costs associated with shipping, also factors into the direction GR Truss’s expansion will take. But if the U.S. Housing market heats up again, and the Canadian dollar maintains its high value, Greco believes there may be opportunities south of the border.

“When the plant was conceived there was the U.S. market that was buying Canadian goods with the high American dollar,” he said. “We’re still hopeful that may come back again, because importing into the States is still a possibility.”