Every Tuesday, Vaughn Alexander and Graham Atkinson invited friends over to watch them brew their homegrown beer and sample their wares.
Apr 2, 2014 6:39 PM By: Lindsay Kelly 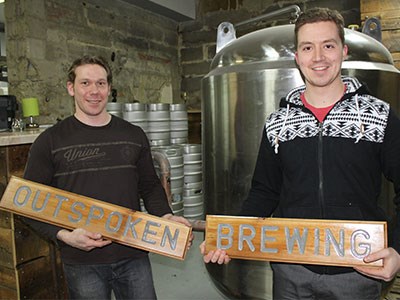 Vaughn Alexander (left) and Graham Atkinson are the proprietors of Northern Ontario’s newest microbrewery, OutSpoken Brewing. The brewery, based in downtown Sault Ste. Marie, plans to launch this spring with an IPA and a blonde ale.

Every Tuesday, Vaughn Alexander and Graham Atkinson invited friends over to watch them brew their homegrown beer and sample their wares.

“It started as a hub where what we were producing was good and people enjoyed it, and it’s taken off,” Atkinson said.

Two and a half years later, OutSpoken Brewing is preparing to open its doors in downtown Sault Ste. Marie, whose residents have thirsted after a homegrown brew since Northern Breweries shuttered its doors in 2006.

Alexander and Atkinson, who had each been home brewing for a decade before meeting, enjoyed craft beers and experimenting with new tastes and varieties, and thought others might too.

“We’re offering a different product in terms of style, flavour, appearance, everything,” Atkinson said. “Our whole product is going to be different than what’s available in the mainstream market—not so different that it’s going to scare people off, but it’s just a fresh look at beer and the beer culture, specifically to Sault Ste. Marie and potentially beyond in the future.”

That viewpoint exemplifies the name of the brewery: the pair is encouraging people to be outspoken in their tastes, to speak up for what they want to drink.

The arrival of OutSpoken further builds on a burgeoning beer culture in the North. Currently, there are microbreweries in Sudbury, Thunder Bay and Kenora. A fourth is in development on Manitoulin Island, and a second microbrewery is in the works for the Sault.

Alexander and Atkinson see the development as a good thing. It hearkens back to the days when each community had its own brewery or distillery, and they believe the current trend could evolve into the potential for tourism tie-ins.

“If we band together, we can create maybe a cultural hub of beer so that enthusiasts can come from Michigan or southern Ontario if they’re travelling across the country and have a passport type of thing where you can come try the local beer,” Atkinson said.

OutSpoken will launch an IPA and a blonde ale to start, sold in growlers and Boston rounds, as well as seasonal brews such as pumpkin spice ale and maple breakfast stout. Five- and 10-gallon kegerators can be rented for special events such as weddings and parties.

The pair said their early Brewsday gatherings were instrumental in shaping the brewery’s current offerings: the kegs that emptied quickly told them which would be the top sellers. Those recipes have been refined somewhat, but not much has changed from those initial formulations.

“We played around with a lot of recipes and decided what variety or genre of beer we wanted to go with and then worked with that,” Alexander said. “People were providing feedback on the beer and that really helped us with our market research.”

Entering into the retail space, visitors will get a visual lesson in Sault Ste. Marie’s history. The building, which has been in existence for 80 years, was formerly owned by the father of local author Morley Torgov, who ran it as a women’s clothing store in the 1930s. Its other incarnations have included a bank, an insurance brokerage, and a dental office.

As the brewery takes shape, the partners have put in long hours repurposing materials found in the space. Since both partners work full time—Atkinson is a forestry technician, while Alexander works as an electrical engineer—the bulk of the work happens in the evenings and on weekends.

Nine layers of flooring have been removed to reveal the original hardwood floors, while stamped-tin ceiling tiles were recycled and installed as wainscoting. Barn board has been used as trim throughout, which gives it a rustic feel.

“We thought, what better way to preserve the history of the building than preserve its original elements,” Atkinson said.

The entranceway has been reserved as a retail space where jugs can be purchased or refilled. A glassed-in area allows patrons to see the brewing equipment at the back, which handles 217 gallons at a time, equal to a little more than 20 kegs. A consultation area has also been set up where visitors planning an event can sit and sample product while discussing food pairings.

To start, however, OutSpoken will focus on selling from its retail space and distributing to local bars and restaurants.

“Eventually, we may look at LCBO or Beer Store distribution, but we haven’t looked closely at it,” Alexander said. “Our focus has been on the local business right now, starting with the beer culture in Sault Ste. Marie.”