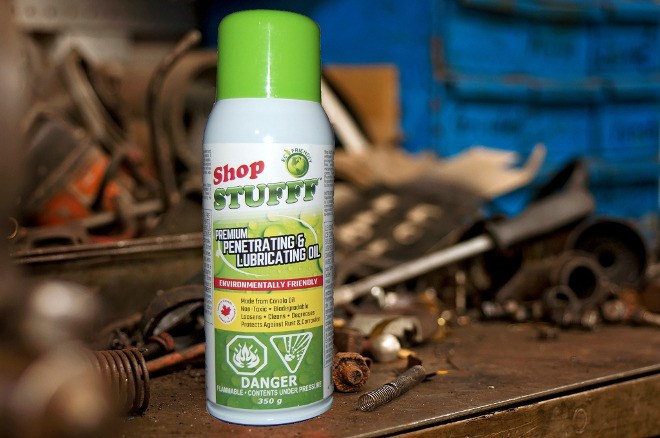 Shop STUFFF, which is manufactured in Northern Ontario, has found a new market in U.S. Home Depot stores. (Supplied photo)

A Northern Ontario-made lubricant has made its first foray into the U.S. market.

Shop STUFFF, an environmentally friendly lubricant manufactured from used canola oil, is now being sold at Home Depot, with its first shipment going to a trio of stores in Arizona, in Avondale, Phoenix, and Scottsdale.

Earlier this spring, the company also announced it had secured shelf space at the Canadian Tire store in Vernon, B.C., and at all APC Auto Parts locations through central and southern Ontario.

STUFFF, founded by Bill Betournay in 2013, is based out of St. Joseph Island, just east of Sault Ste. Marie.

Betournay first discovered the use of canola oil as a lubricant while looking for something to loosen up a seized part on his truck.

He tried out a homemade recipe using canola oil as a base and discovered it worked like a charm. The company now manufactures a series of products sourcing used fryer oil from restaurants around Sault Ste. Marie for the raw materials.

In 2018, Betournay appeared on the CBC pitch-style TV show Dragons’ Den, landing a contract with Boston Pizza magnate Jim Treliving for 50 per cent of the company.

The product has also been recognized with a number of awards, including Innovation Business of the Year from the Sault Ste. Marie Innovation Centre in 2016 and 2018, and the Innovation Award from the Northern Ontario Business Awards in 2018.

Weighty decisions ahead for Sault airport, faced with precipitous drop in air travel
Oct 7, 2020 1:39 PM
Comments
We welcome your feedback and encourage you to share your thoughts. We ask that you be respectful of others and their points of view, refrain from personal attacks and stay on topic. To learn about our commenting policies and how we moderate, please read our Community Guidelines.