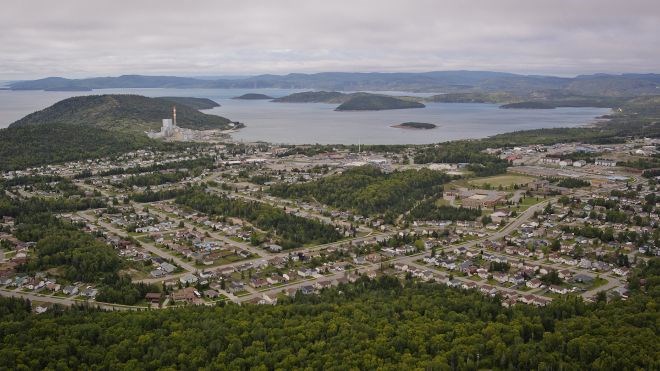 Davis said he’s been assured by Ontario cabinet ministers Michael Gravelle and Bob Chiarelli that their $100-million regional affordable energy project stands a good chance of securing money to make it a reality.

“They both feel that the grant program keeps us in the top five for moving ahead,” said Davis, who met with Gravelle, the local MPP and northern development and mines minister, and Infrastructure Minister Chiarelli on the afternoon of Jan. 30 to hear their explanation.

“They think this is a better option for our communities to succeed in getting the grants to make this move forward. We want to work with them to make this happen.”

Additionally, Davis said a top Ministry of Finance advisor told him their LNG application likely wouldn’t have been accepted under the previous program.

“According to Finance, the amount of equity we would have to have to get the loans wasn’t there. We probably wouldn’t qualify. They felt much better if we were successfully in the large grant program in getting approved.

For more than two years, the communities of Terrace Bay, Schreiber, Marathon, Manitouwadge and Wawa have partnered with Northeast Midstream, a southern Ontario energy developer, to study the economics behind tapping into the natural gas pipeline at Nipigon, freezing the gas and then trucking it to distribution centres in each of the towns.

The rugged topography of the North Shore makes it too expensive to extend a natural gas pipeline into these communities.

Area mayors and administrators had been anxiously waiting for months for the province to announce the opening date for project submissions under the previous program. Instead, they got found out some changes were in store.

In an email, Katrina Kim, a press secretary in Chiarelli’s office, concurred that the draft proposal put forward by Northeast Midstream was “not viable under the loan program. We look forward to working with them to see how they might be able to take advantage of the expanded grant program.”

The intake for project applications under the new Natural Gas Grant Program is expected to start some time this spring, she said.

Kim explained that the change was influenced by concerns from municipalities, First Nation communities and utilities which “indicated that a grant would be more effective than a loan in expanding (natural gas) access.”

A controversial decision by the Ontario Energy Board (OEB) last November also played a factor.

The energy regulator ruled that communities wanting to bring natural gas service to homes and businesses will be saddled with the full cost of the expansion, rather than spreading the cost out across the entire ratepayer base of the province.

The ruling was panned by chambers of commerce, and policy and municipal groups across Northern Ontario.

A “highly disappointed” Marathon CAO Daryl Skworchinski said it was evident change was in the works after meeting with Infrastructure Ontario officials a week earlier, he said.

“We had a letter dated Dec. 9 from Chiarelli that said: get ready for the application process,” said Skworchinski. “Then they say in January there’s been a change.”

In their LNG proposal, the communities were aiming for a loan in the range of $75 million to install the community infrastructure in the ground.

“That’s one of the frustrations from the municipalities’ side,” Skworchinski said. “The business case we built wasn’t built on a grant. It was built on accessing a government loan.”

Throughout the process of developing the proposal, he said the project seemed to have the government’s tacit approval. The LNG feasibility study was even supported by the Northern Ontario Heritage Fund.

“I don’t think they realize the amount of work that goes into putting a project like this together. You’re talking about a $100-million project involving five communities. That’s not something you roll out overnight,” said Skworchinski.

With a grant program, Skworchinski suspects there will be a bigger scramble for dollars by more communities partnering with major gas distributors.

“When it’s a loan there’s an accountability factor, knowing that you have to repay the money. When it’s a grant, it’s a giveaway. You’d be silly not to put your name in the mix.”

He felt less confident than before that the $100-million grant program will allow the project to succeed.

“I don’t know how you make it work with $25 million if you’re lucky to get that amount.”

Skworchinski said once they gather more information from the province, they’ll meet as a collective group to determine if the project remains viable on a grant basis and to see what their financing alternatives are.

For now, he said, Northeast Midstream remains aboard as a partner.

“What the future holds for the project, I think we’ll have a better sense in a month.”

Though not aware of any objectors to their project, he suspects gas distributors with pipeline projects on the books in southern Ontario are satisfied with the government’s decision.

"Union Gas has been working co-operatively with the Ontario government over the past few years to bring natural gas to northern, rural and Indigenous communities," said Steve Baker, president of Union Gas in a Jan 30 release. "Today's announcement of a $100-million natural gas grant program will help us move forward on our commitment to bring affordable and clean energy to more communities and families."

Davis said he spoke with a disappointed Northeast Midstream CEO Joshua Samuel soon after the announcement.

“We said we’ve got to get back to the drawing board and meet with the ministry to find out what we need to do to move forward.

Davis said he came away from his meeting with Gravelle and Chiarelli somewhat encouraged.

“I’ve been optimistic, I’ve never been confident. It’s an expensive project. We need it. Without some kind of funding, whether loans or grants, we couldn’t afford to make it happen. We need the upfront money.

“We’ll have to work for it. This is just a tweak in the system. The long-term goal is to get the affordable heating costs for our residents.”