Construction program is a career builder 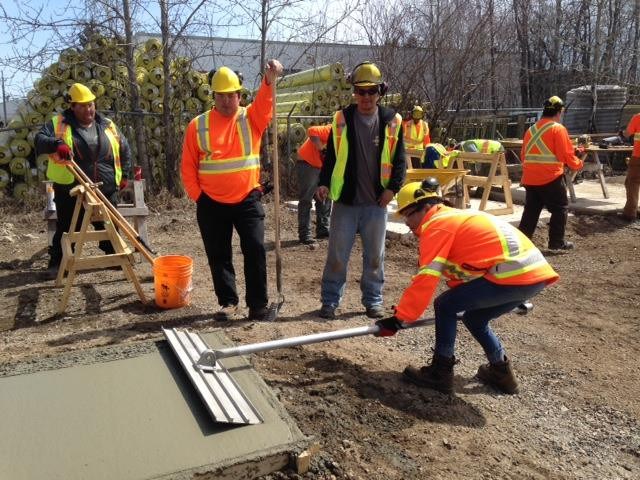 Construction activity along Lake Superior’s North Shore is poised to accelerate over the next few years with major energy projects like the East-West transmission tie and Energy East pipeline in the queue.

A First Nation training organization in Thunder Bay has been getting a head-start in filling the ranks of regional labour pool by cultivating some home-grown talent.

Lynch steers and handles the recruiting for the provincially-funded construction craft worker training program, an introductory course to the world of skilled trades, that’s available to First Nation members in the AETS coverage area.

When the next round of training begins on March 20, Lynch expects to have no problem filling the program’s 20 seats. In mid-January, she was in the midst of pulling together her third cohort since the program began in the spring of 2015 with just 14 seats.

“They start their training roughly around mid-March and that way they’re ready for work during the construction season – which sometimes limited – and we have them on their (work) placements by June,” she said.

The program is eligible to on and off-reserve members in the communities who are unemployed or underemployed.

There’s nothing paid of pocket for enrollees. AETS equips them and handles all their accommodations, meals and transportation.

Applicants have to be physically fit and come with a ready-to-work attitude.

For those who struggle with critical skills needed for construction like math, AETS provides additional pre-employment training.

Though classified as a pre-apprenticeship program, enrollees are exposed to a full array of hands-on activity, tools and equipment during the intensive eight-week cycle.

The Labourers International Union of North America (LiUNA), Local 607 deliver the training at their union hall in Thunder Bay.

At the conclusion of training, graduates head out on work placements that can last 8 to 10 weeks.

“Typically what happens at the end of their placement is they’re hired,” she said. “We try and build the placement into what they want to do. One of the guys last year wanted to weld, and we got him a placement at Lac des Iles Mine, and he’s still working there.”

AETS boasts a program graduation rate in the 86 to 90 per cent range and an employment rate equally as good, Lynch said; impressive considering the stagnate construction climate in northwestern Ontario. Five graduates from last year have signed for full apprenticeships.

“Every year we’re hoping to build on that,” she said.

Unlike programs in the past, Lynch said their success in securing work for graduates has resonated in the communities based on the positive reception the program has received.

“It’s huge. Every year the applications are growing exponentially because the word’s out that’s it’s a really great program.”

Lynch said they’ve instructed a wide range of trainees in age and experience in both genders.

“We have (trainees) anywhere between age 18 and 55, and I’m hoping for even more women this year.” In screening applicants, Lynch stresses in her community pitches that a “100 per cent commitment” from applicants is necessary.

“That’s what we talk about during recruitment. You gotta be ready for this. With construction, you’re going to be away from home anyway, typically.”

“Half the battle is to get good recruits who are interested and stay the course,” said Varga. “They’re (AETS) good at finding placements for them.

“Once they go through that training, they get so many certificates for skills and safety that they’re very desirable by contractors.”

Varga said the skills they pick up enable them to enter into a diverse range of industrial or construction-related fields after the course, mentioning pipeline work, cement truck drivers, highway maintenance and a multitude of roles in large project work.

“It has opened the door for many to get employment because Angie did get placements for everyone in the course.”

Restocking the regional labour pool with Indigenous workers makes sense and is vital to contractors and developers with infrastructure projects, especially when it’s tied into negotiating impact benefit agreements between companies and First Nation communities.

“Our policy is that when the work falls on Aboriginal land, we allow 25 per cent of our local content to be First Nation,” said Varga.

With large multi-year projects like the Little Jackfish River Hydroelectric Project, north of Armstrong, and the East-West link still on the books, Varga is uncertain what the eventual workforce demands will be since construction contracts from Ontario Power Generation have yet to be awarded.

“There are 2,000 towers to go up with the foundation for each tower. That’s a lot of labour in pouring cement, (handling) rebar and bush clearing. I would guesstimate it could be a pretty big crew with two-and-half years of work.”

Varga said quite a few of their members are Indigenous with many having worked on the Nipigon River bridge, New Post Creek and Lower Mattagami River hydroelectric projects.

Training more Indigenous workers keep the union’s ranks replenished as well as since some members let their union dues slide after jobs end in their area, in not wanting to move from the community to take on new work.

As a designated training delivery agent for the program in Northern Ontario, Varga said they wouldn't refuse to train Indigenous people when First Nation communities approach them.

“What we charge them (for training) is break-even. We’re not here to make a profit off them,” said Varga. “That’s our commitment to getting them trained up for the workforce.”