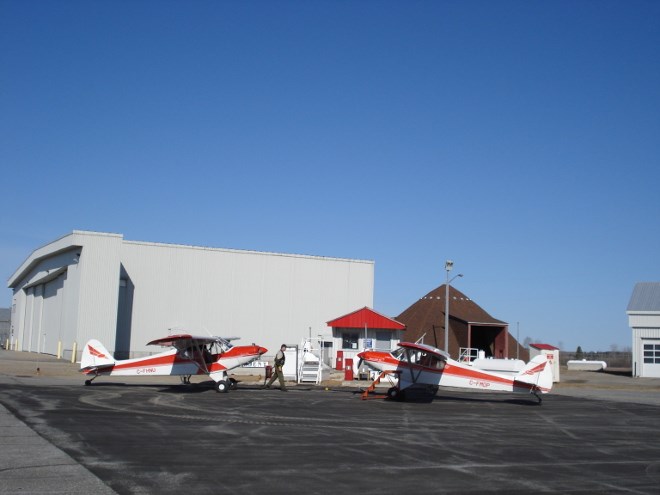 Michael Hicks has sky-high expectations that the Earlton-Timiskaming Regional Airport can be a hub of activity for training international pilots.

The president of the fledgling Canadian Aviation College has ambitious plans to import students from China by the dozens, and maybe the hundreds, every year to northeastern Ontario to fill that country’s growing need for pilots.

Last September, the 11-employee startup opened for business at the sleepy, rural field located 1.5 kilometres from the town of Earlton, and took in its first class of 12 students from China in November.

Aviation training in China is very expensive and air space is limited and tightly controlled by the military, explained Hicks.

The flight school’s one-year program provides a Canadian commercial pilots licence, with multi-engine and instrument ratings, which can be converted to a Chinese licence.

“They’re basically ready for an entry-level job like a Canadian student would,” said Hicks.

And as they build up their flight hours in Canada, students get to brush up on their language skills.

“The students arrive with a basic English level and we teach them aviation English,” said Hicks. The aim is to bring in 20 to 30 students every three months “and if we got that far and become a very large program, we’re talking 100 students at a time.”

The Air Transport Association of Canada said half of the world’s air traffic growth in the next 20 years will be driven within the Asian Pacific region.

Within China, the annual growth rate of those obtaining pilot licenses is 13.5 per cent with more than half of the pilots obtaining their professional training internationally. Canada’s stringent regulatory framework and compliance with International Civil Aviation Organization’s standards and practices is regarded by international airlines as one of the world’s best.

Michael sought a less congested air space and through his connections with Wabusk Air was introduced to Earlton, where the Moosonee-based carrier performs its aircraft maintenance.

The airport features a 6,000-foot runway and 15,000-square-foot hangar owned by Wabusk with office space that can serve as classrooms.

“The facility is really great considering how remote it is,” said Hicks. The school maintains a fleet of five aircraft – Cessna 172s and 150s – that is expected to expand. “We’re adding more every day. I just bought another one,” said Hicks. “We’re growing pretty quick.”

Canadian enrolment should pick up as well, he said, through training deals with two colleges.

Hicks said one of his planes is flying out of Canadore College’s aviation campus at Jack Garland Airport in North Bay, where four students are enrolled. He’s working on finalizing another deal with Northern College to set up their program in Earlton.

Adding a few hundred pilots-in-training to the Claybelt farming region should do wonders for the local economy,

Hicks suspects, especially on the housing side. His current batch of students live in a rented apartment building in Haileybury.

The flight school’s presence should also be a springboard to drive more business to a money-losing airfield that area municipalities were struggling to keep open, said Hicks.

As the chair of the new airport authority, his executive committee will soon be negotiating an agreement with the flight school on landing fees, electricity billing and fuel supply, and drafting up a five-year capital plan.

“We’ve got to come up with a plan to how we’re going to start generating revenue,” said Kidd, who recently received a temporary operating certificate from Transport Canada, thus transferring operations from the Township of Armstrong to the new authority.

The new not-for-profit replaces an unwieldy municipal services board where municipalities contributed money toward the airport but didn’t have any say on major decisions since the township was in charge.

But the township didn’t have the finances to make the necessary capital repairs like sealing the cracks in the runway.

With the authority, Kidd said they’ll be better positioned to apply for government funding to do all the needed and necessary fixes and upgrades.

One revenue-generator the authority won’t have at its disposal is the hangar as the Township of Armstrong sold it to Wabusk Air, an asset asset that could have been leased out to tenants.

“We’re not pleased that they did that,” said Kidd.

But in assessing the business potential, a consultant’s report tells them they could build and lease out rows of small T-hangars for recreational aircraft.

Kidd said they’ve also had preliminary discussions with Wabusk on establishing a scheduled passenger service-medical transport to Sudbury, and working with Wabusk on bringing in businesses that would want to use the Earlton airport as a staging base ferrying supplies to communities along the James Bay coast.