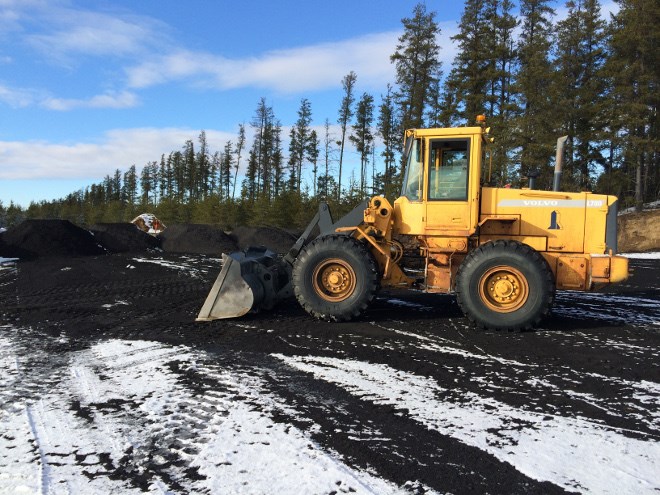 A Kirkland Lake entrepreneur is discovering new green uses for what was once thought to be an industrial waste by-product.

Brian Coghlan has the only licensed wood ash landfill in Ontario where he has stored more than 300,000 cubic metres of the material from the nearby Kirkland Lake Power co-generation plant.

The former Kirkland Lake town councillor believes ash has a myriad of recycled uses beyond just agricultural and horticultural applications where it’s often used as a growth medium when mixed with top soil and fertilizer.

“The beauty of this waste material is that it can be used for environmental cleanup,” said Coghlan, who established Wood Ash Inc. in 2002.

Through his collaborations with university researchers, Coghlan has high hopes the ash can find regular use in mine tailings rehabilitation, acid mine drainage, hydro-carbon removal of contaminated groundwater, and possibly even gold extraction.

University of Toronto researchers are using his ash to conduct plant growth trials on tailings at Goldcorp’s Porcupine Gold Mines in Timmins and at the Musselwhite Mine near Pickle Lake.

A Goldcorp spokesperson said it’s too early to comment on the results but Coghlan said he’s getting back good reports.

He has another trial lined up with another northeastern Ontario gold miner next year.

Coghlan got into the business while working in waste management in helping Kirkland Lake Power search for a new disposal site.

For years, the utility disposed of ash in the municipal landfill where it was plowed into the garbage as covering material.

At his aggregate pit, east of Kirkland Lake, Coghlan receives about 25,000 cubic metres of ash a year and basically stockpiles it.

The ash is classified as non-hazardous material but he’s still licensed as a landfill.

For agricultural use or any food chain-related applications, he contracts someone to screen the material.

Otherwise, the product can be spread in the same condition as he receives it.

Since it’s been used at the research stage, no special permitting is needed from the Ministry of Environment and Climate Change, but eventually he would like to segue into larger reclamation projects.

Besides being used as a fertilizer to help vegetation grow quicker, the ash contains 38 per cent carbon – known as biochar – and its high pH level will neutralize acid in tailing ponds and mine water.

University of Quebec-Rouyn researchers used his ash in a large biofilter field experiment.

Acid mine drainage was flowed through a trench filled with wood ash. Monitoring equipment measured that the acid was neutralized and some of the heavy metals, particularly iron, were absorbed, which is a critical contaminate.

In polluted groundwater situations, other research has demonstrated it will consume nasties like toluene and benzene.

At Kirkland Lake Gold’s Macassa mine complex, the biochar in the ash has shown it will absorb gold.

“We tested it in their gold mine circuit and it worked almost as well as activated carbon,” said Coghlan. “It’s a very diverse material but essentially it’s all about the carbon,” he said.

“Each carbon application would have to be tested, but I certainly know the trend and how the material behaves and it’s very positive, especially from an environmental cleanup point of view as a substitution for activated carbon.”

The potential to branch out into environmental remediation presents a great opportunity for Coghlan given that he’s located close to mines in Kirkland Lake and Rouyn-Noranda.

However, it’s not economical to truck the low-cost material beyond an 80 to 110-kilometre radius.

“If it was processed and we were just selling the carbon, then we can ship it farther and it would be worth more money,” he said.

The likely next stage of his company revolves around a proprietary value-added separation technique that he’s working on with the University of Western Ontario where the carbon would be extracted from the ash. If it becomes a viable technology, Coghlan said he’s costed out the design for a plant near Kirkland Lake, where he owns 80 acres of land in Gauthier Township.

“If I separate the carbon from ash, there’s huge potential for growth as a substitute for activated carbon, which could be used in wastewater treatment filtration.

“To reach that stage, he said he would need a “strategic partner” who could bring financing, technical and marketing expertise to the table.