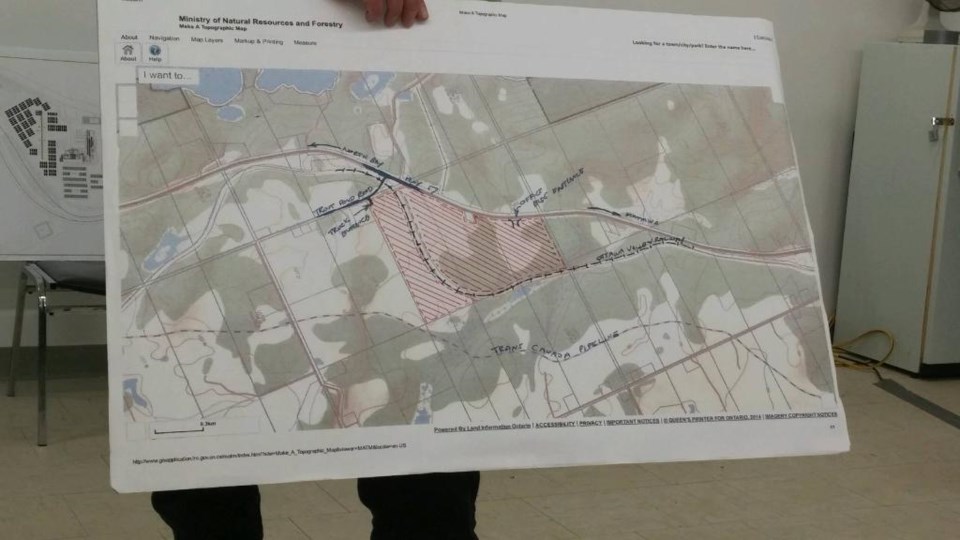 The red portion of the map indicates the location of the new sawmill in Bonfield. (Photo by Stu Campaigne)

Plans for a new sawmill development — including a lot of new jobs — were unveiled at a press conference on July 13 in Bonfield.

International Wood Industries is budgeting $145 million and seeking to rezone 212 acres of land, located at the junction of Highway 17 and Trout Pond Road in the Township of Bonfield, to build a sawmill facility.

Bonfield has a population of about 1,900 people, and is located about a 30-minute drive southeast of the City of North Bay.

Officials stated that permits and licences are still needed, but the hope is for the facility to be operational by January 2019.

"While this facility will be in Bonfield, the whole region stands to benefit," she said.

The project is being billed as a true collaborative effort between the surrounding townships, agencies, railways and IWI. Maitland said the partnerships formed with the Ottawa Valley Railway (OVR) and Madadjiwan First Nation, well ahead of having shovels in the dirt, will make the development run smoothly, and help various interested parties prosper.

"Ninety jobs and a $4.5 million annual payroll is a huge investment in our community and our area," added Maitland, "and we know that people will be making good money, and have full-time work that is steady and reliable, and that also feeds other people in the community. It's a huge announcement."

IWI president Gary Medwid said that with the railway in place to bring products to seaports, the proposed facility will ship as far away as China.

Medwid said that new innovation that speeds up the production line will be the key to the success of the business, touted as being a "state-of-the-art sawmill and wood processing centre."

On the site, plans include a sawmill, dry kilns and a planer mill and CNC facilities. There will also be an employee cafeteria and administrative office at the sawmill location, and employees will enter through an entrance on Trout Pond Road. A separate entrance will be dedicated for logging trucks and will be equipped with a weigh station.

Environmental assessments and a traffic study are in the works and the paperwork for the rezoning of the land from agricultural to commercial/industrial was to be filed July 13.

Maitland relayed that the land has been purchased conditionally, subject to the approval of the project at all levels. The development had been kept under wraps for the four months since IWI contacted the MBEDC looking for 100 acres of land with access to highway and railway.

Hiring will commence in the fall for positions necessary to be filled before the January 2019 sawmill opening. The goal is to have the permits and licensing settled by September, and have ground work commence this October. Construction would run until December 2018.

However, officials want to avoid any confusion in the early stages of the project.

"Until a proper website is set up, all inquiries should be directed to the MBEDC," advised Maitland.