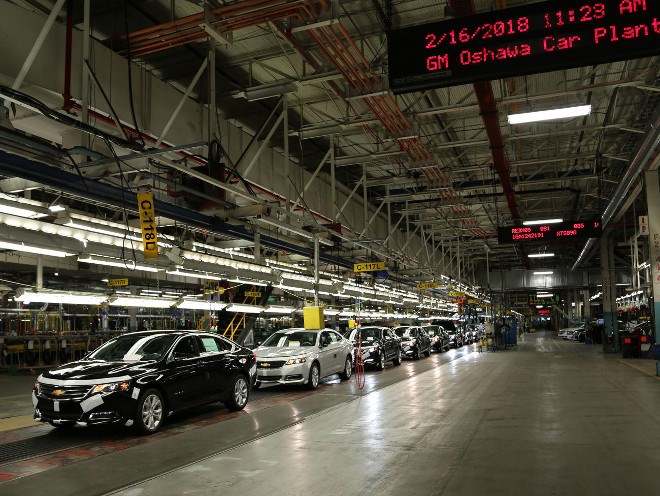 Veteran North Bay Counc. Mike Anthony is proposing to attract workers to North Bay from Oshawa’s GM plant, which is slated to close by the end of 2019, to fill skilled trades vacancies in the city’s industrial sectors. (Unifor photo)

Could the autoworkers facing job layoffs in Oshawa find a soft place to land in North Bay? Mike Anthony thinks so.

In February, the North Bay city councillor publicly proposed the idea of recruiting autoworkers to North Bay to fill vacant positions for skilled tradespeople, such as welders and CNC machine operators, in the city’s mining service and supply industry and other sectors.

“We simply don’t have job seekers with those skill sets, as much as we’ve tried to encourage them to retrain,” Anthony said. “So we have companies…where they, literally, have not been able to have a full complement of staff.”

The veteran councillor believes the 2,500 employees currently working at the General Motors (GM) assembly plant in Oshawa could be one valuable resource.

They, along with workers in four other North American GM facilities, found out last November they would be out of work by the end of 2019 when GM closes the plant for good as the company shifts its focus to developing electric cars. The closure is also expected to impact thousands of workers along the automaker’s supply chain.

The cost-cutting measure is expected to save GM $6 billion by 2020.

Located just three hours from the GTA, North Bay has a lot to offer city workers, Anthony said. Even if they wanted to commute north to work during the week and return to Oshawa on the weekends, “it’s probably still less time than you spend commuting down south,” he contended.

But the hope is that, after landing a good-paying job, travelling shorter commutes, experiencing more affordable housing and living costs, and enjoying the overall beauty of the area, some of those workers might be enticed to move north permanently.

“If they saw a benefit once they’re up here working, maybe they'd say, ‘You know what? Maybe I should sell my house down there that I pay an arm and a leg for and move to North Bay,’” Anthony mused.

“I mean, you've got no more huge commutes. You've got no more being far away from natural beauty. You can be on one of two lakes in five or 10 minutes after work, so maybe they’d see the benefit to that.”

North Bay is the second Northern Ontario community to broach the idea of bringing GM workers north. In January, a contingent from Sault Ste. Marie said it had started a conversation with GM about recruiting workers to that city, which is experiencing a similar shortage of skilled employees.

Anthony said he wouldn’t discount the possibility of working with the Sault, or other Northern communities, on forming a Northern Ontario delegation to lobby as a united front.

But his efforts are currently in what he called the “embryonic” stages.

Outreach to both Yes Employment Services and Ian Kilgour, North Bay’s incoming director of community development and growth, yielded support for his plan, and Anthony said he was hopeful a meeting of local stakeholders would take place in February to outline what the next steps would be.

Attracting soon-to-be-unemployed autoworkers is just one of a handful of ideas Anthony’s proposing to boost the city’s working population.

He also sees opportunity in bringing online entrepreneurs to North Bay, and marketing the city to visitors coming into town for the city’s major sports tourism events.

There’s still the better part of a year before Oshawa’s GM workers are permanently without work, which gives the city plenty of time to capitalize on what Anthony sees as a chance to think “outside of the box.”

“We've got these unfilled jobs. There's going to be people, unfortunately, out of work who might have the transferable skills. We haven't been able to fill these jobs locally,” he reasoned.

“Could those folks look at taking those jobs? Could we potentially even grow our city a little by getting 10 or 20 or 30 people who might want to move here, not just work here and then commute?”