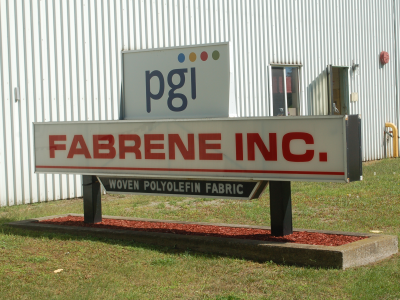 PGI Fabrene in North Bay is closely monitoring its global adjustment charges which is part of its energy bills.

If Fabrene faces a five-fold increase on part of its energy bill, the North Bay plant will close.

“The lights will be out here,” said John Spencer, vice president of operations at PGI Fabrene Inc. “That’s guaranteed. No ifs or buts.”

Since 2006, Spencer has been watching the global adjustment charge on the plant’s electricity bill rise from less than four per cent of his total costs, to more than 50 per cent.

The charge, previously called the provincial benefit, is paid by all customers.

The global adjustment is the difference between the rates paid by Ontario governmental authorities to regulated and contracted electricity generators and the spot market prices for electricity consumed in the province.

That includes what the province pays for green energy (solar and wind) through its Feed-in Tariff (FIT) program, which is about 80 cents per kilowatt hour (kWh).

When the economic downturn occurred in 2008, many businesses and manufacturers closed for good. As a result, the province’s electricity consumption decreased.

“I started asking what it was and quite frankly, the information was difficult to get,” he said.

He belongs to an energy and manufacturing consortium made up of members from Ontario and some from the Eastern provinces.

“I started contacting them and actually held a webinar for our members on what I learned. I told them they have to understand what is happening here. We have too much power now in Ontario,” Spencer said.

Some recent statistics he found showed that more than 50 per cent of the energy generated in the province was sold, at prices less than the market rate.

“(The province) is dumping it so it is selling it to my competitors (in Quebec and the U.S.) at less than what they are charging me,” he said.

“In the meantime, I am paying global adjustment charges to make even more energy we don’t need at even higher costs. I am having difficulty understanding why anyone is letting this go on.”

MPP Vic Fedeli (Nipissing – PC) said the government is currently paying wind and solar producers to make more power that is not needed.

“Every night we end up paying Quebec and the U.S. to take our surplus power because you can’t store it once it is made.”

He said wind accounts for three per cent of the energy in Ontario, while water power went from 25 per cent to 22 per cent.

“Water power is the greenest energy. It is renewable and reliable and all the province did was replace one green energy with another to call us green and bankrupted us in the process.”

Fedeli said the province's auditor general indicated that the global adjustment charge amounted to $700 million last year. In 2018, it will grow to $8.1 billion.

“We have 1,000-plus wind turbines out there today but there are 44,000 FIT applications in today, for wind and solar, that haven't been approved yet. It's a disaster getting ready to happen,” he said.

Fabrene's case was brought up in the provincial legislature in March by Fedeli, while Spencer attended Question Period.

Since then, he has received calls from a variety of businesses across the province.

“I am not alone, and, my numbers and ratio are not alone. A five-fold increase will kill many, many businesses in this province,” Spencer said.

“So do I believe that will happen? I can't believe that. I have to believe that people like myself and the public will realize this is off the track and we have to fix it.”

He is surprised at the lack of awareness about the charge, even with other businesses, and feels that consumers don't realize or are apathetic.

“The apathetic ones are the silent majority and we have to get them to speak out. Businesses will either leave the province, die a slow death or start to fight. But whoever is left standing here, businesses and people, will be required to pay a higher and higher share.”