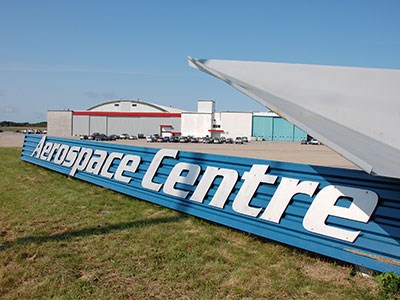 North Bay's Aerospace Centre at Jack Garland Airport has landed tenants like Bombardier, but the next wave of growth may be as a future training ground centred around Canadore College's Aviation Campus.

As vice-chair of a parliamentary aerospace caucus, Aspin was making the rounds this past summer on tours of Canada's major aerospace hubs in Montreal, Toronto and Winnipeg.

Building on his contacts made with Pratt & Whitney, Boeing, Bombardier, Bell Helicopter and L-3 MAS, Aspin hopes to create a showcase event this fall to promote the aviation-related businesses and capabilities at Jack Garland Airport.

“From those three visits I'm going to be inviting a number of the players I've met to come to North Bay.”

In early September, Aspin was putting the final touches in organizing a one-day aerospace forum, tentatively scheduled for early November. He would like to time the event to coincide with a visit from federal industry minister James Moore.

The growth of this sector is high on Aspin's and Ottawa's radar in improving on Canada's fifth place global ranking in aerospace technology.

The federal government is promoting the former Downsview Airport in Toronto's north end as one such cluster.

A public-private partnership has formed there consisting of Bombardier, makers of the popular Q-400 turboprop aircraft, Centennial College and the University of Toronto Institute for Aerospace.

Aspin believes North Bay – a half hour's flight north – can work in tandem with this cluster.

“If we get the training (element growing), we'll get all kind of companies offering ancilliary services and we just might get a manufacturer or an assembler.”

Over the years, North Bay has had its share of successes and near-misses in aviation.

In 1998, the city pursued and convinced Bombardier to locate the final assembly plant of its CL-415 waterbomber aircraft at the airport. It's been a cornerstone of the Aerospace Centre, a collection of companies inside the refurbished former Canadian Forces hangars.

But three years ago, North Bay came up short in landing a Dornier Seaplane Company assembly plant that went to Saint-Jean-sur-Richelieu when the Quebec government outbid Ontario in a $35-million sweetheart deal.

Aspin said growing the training component is the best way to carve out a niche.

“Canadore Aviation has been in the field for 40 years, they have a super facility at the airport, and I'm working with (college president) George Burton to grow that facility.”

Besides the airport's Aerospace Centre, a city industrial park nearby is also taking shape with three mining supply and fabrication companies taking up occupancy.

“It's a winner if you have businesses that are mining-related or if there's aerospace,” said Aspin.

“Companies are going to go where the expertise is. If you're increasing your expertise, you're going to attract them.