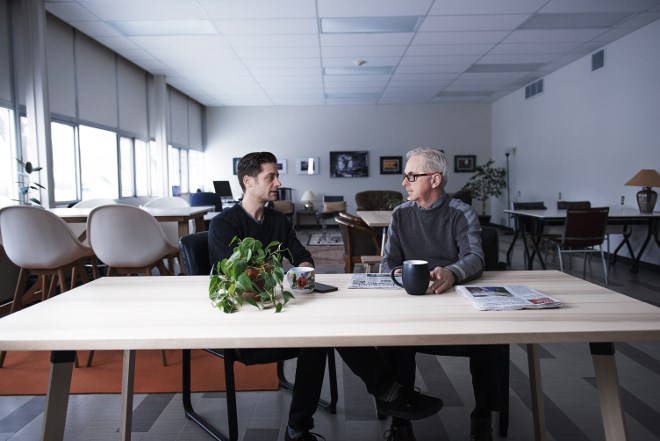 Father-son duo Richard (left) and Christian Fortin are developing a former elementary school in North Bay into a coworking space that provides creative, flexible options for a variety of tenants seeking space in which to operate. (Ed Regan/reganpictures.com)

At North Bay’s former Tweedsmuir Elementary School, the tenants are interesting and varied: a lawyer, visual artists, mental health professionals, a yoga studio, and the Canadian Cancer Society have all found a home here, embracing their differences to create a unique work environment.

As the name implies, the 20,000-square-foot former school has been transformed into a coworking space where everyone is welcome, and any kind of tenant can find room to meet their needs.

It’s the brainchild of father-son duo Christian and Richard Fortin, who purchased the building in 2015 after a local school board declared it surplus and have been undertaking extensive renovations on the school ever since.

“I had seen in Toronto coworking spaces that were just incredibly dynamic and amazing and changing, and they really and truly have…blown up,” he said.

“I came back to North Bay and wanted a space like that.”

Christian, owner of Mallette-Goring in North Bay and president of Pronor Developments, brought three decades of experience in real estate and development to the project.

Together, the pair conceived a collaborative, membership-based enterprise that’s designed to be smart and efficient in serving its assorted tenants.

Popular in larger metropolitan areas around the globe, coworking spaces are large, often repurposed buildings with lots of square footage that’s broken up for different uses to create affordable, flexible space for a variety of clients.

At coworking176.space, desks or small, private offices are available for rent for new, home-based entrepreneurs, for example, and boardrooms and meeting rooms are on site, should they need a larger space to meet with clients.

“What’s really different than a normal place you rent in town is that here you pay for use,” Christian said.

“So, you don’t pay rent on boardrooms that are vacant 50 or 75 per cent of the time. If you need a boardroom, you book it and you pay for the time you use it.”

There are also larger spaces available for more permanent, anchor tenants that are seeking a unique work environment, like the Canadian Cancer Society.

This model also makes it more affordable for not-for-profit organizations or artists who don’t always have the resources for a traditional studio or storefront.

In addition to the business startups, coworking176.space is also home to visual artists – whose work adorns the walls of the hallways in a makeshift gallery – a weekly flute group, yoga classes, and other workshops and community activities.

“It’s becoming a bit like a club, which is the idea,” Richard said. “It’s kind of neat because it’s happening as we’re doing it, and we’re developing it as we go.”

The unusual mix of professions, activities, and personalities mingling at coworking176.space can result in unlikely friendships, partnerships and even opportunities for working relationships, Christian said.

It’s human nature to want to hire the people you know, he reasoned. For example, in a space where new entrepreneurs are starting out, a bookkeeper or IT professional could find plenty of work advising fellow tenants.

“There’s a lot of potential to create relationships and work,” Christian said. “I think we’re creating an environment where that can happen.”

Coworking spaces are also great opportunities to repurpose old buildings that are vacant and have outlived their original use, added Christian, a long-time believer in repurposing in development.

When Tweedsmuir closed, it left a large, empty building in an older neighbourhood, a trend that’s becoming more common as more schools close in the wake of shrinking demographics.

New development has shifted to the north end of the city near Canadore College and Nipissing University, leaving the neighbours feeling somewhat discarded.

To date, 16,000 square feet of the space has been renovated, and the former schoolyard has been transformed into a garden with a sitting area where tenants can take a break or work outside.

The remaining 4,000 square feet is currently under renovation and estimated to be complete by June. The pair will also do some landscaping to spruce up the grounds, and the parking lot will get a fresh layer of asphalt.

Father and son are optimistic it’s a model that can be replicated in communities across the North, as long as the proponents are diligent, persistent and flexible.

So far in North Bay, their approach seems to be working.

“I never had a Christmas card from a neighbour saying ‘thank you for doing something in my neighbourhood,’” Christian said. “I had one this year.”