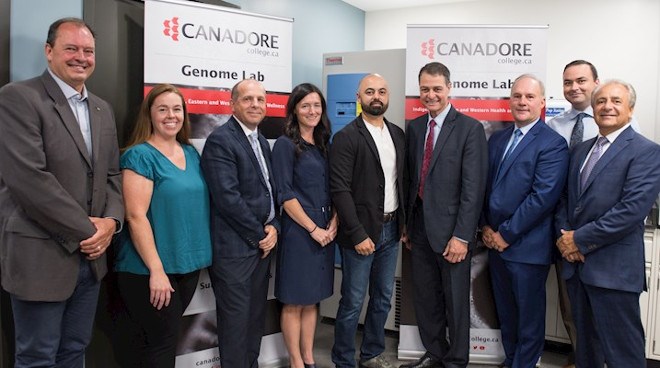 Canadore College in North Bay marked the official opening of its functional genomics lab on Aug. 29, ushering in a new wave of science-related applied research and educational programming.

“It is a grand day; it is an exciting day,” said David Villeneuve, a professor in biotechnology at Canadore. “And it is going to be a unique opportunity for anybody in Northern Ontario to participate in a branch of science that we refer to as next-generation sequencing.”

Functional genomics involves the study of the genome, or the sum components that make up an organism’s DNA, and how it impacts various biological processes.

The science has potentially wide-ranging applications. In health-care, for example, it could be used to find preventive measures against illness.

Canadore announced the establishment of the $1.5-million, 1,000-square-foot genomics lab in March, along with a partnership agreement with Mississauga-based The DNA Company.

The college currently offers a biotechnology technician course, but additional programming is on the way.

College president George Burton said Canadore received, in late August, provincial approval to offer a post-graduate certificate in functional genomics and clinical consultations. It will be offered as early as 2020.

A number of professional development courses in functional genomics for physicians and other health-care providers are also in development.

The initial courses will be overseen by Dr. Mansoor Mohammed, president and chief science officer at The DNA Company.

“I’m really happy that he has come on board with us in this phase of our development,” Burton said.

Last April, following the announcement of the Canadore-DNA Company partnership, Mohammed indicated one of the projects undertaken at the lab would explore better ways to treat and support those with autism spectrum disorder (ASD).

According to Mohammed, ASD primarily impacts brain development, which results in affected behaviour, social interactions and one’s ability to communicate.

Research indicates that inflammation occurs during early stages of brain development, and that an unhealthy balance of microorganisms in the stomach is a cause of neural inflammation, Mohammed said, while toxins, chemicals and heavy metals could be additional sources.

“We know that the body’s capacity to cleanse from these toxins and chemicals is unique to each individual, and we are committed to furthering research with Canadore College to determine the effects that personalized medicine and supplements can have on the detoxification process,” Mohammed said last spring.

Burton is also hopeful of finding new applied research partners, across industries; in particular, he said, the fields of medical, pharmacology, addictions, surgical implants and more.

“Today is a large step and a small step all at the same time. It’s a large step that we have this science based at Canadore College in Nipissing and in the City of North Bay,” Burton said.

“But this is just one small step towards our agenda of increasing our applied research platform at Canadore, which currently sits at $2.5 million annually for investigative research.”

Burton said the college’s goal is to increase that number “exponentially” over the next 18 months.

Canadore’s genomics lab is one of the first in the Ontario college system, Villeneuve added, which presents a unique opportunity for students.

“The future is bright and we look forward to many different scientific partners coming in, on both the academic side, commercial and industrial, as well as on the health care and environmental side,” Villeneuve said.

“This science applies everywhere in our lives and it represents the future, and we’re going to be doing it here in Northern Ontario, here, centred in North Bay, helping the rest of the world.”