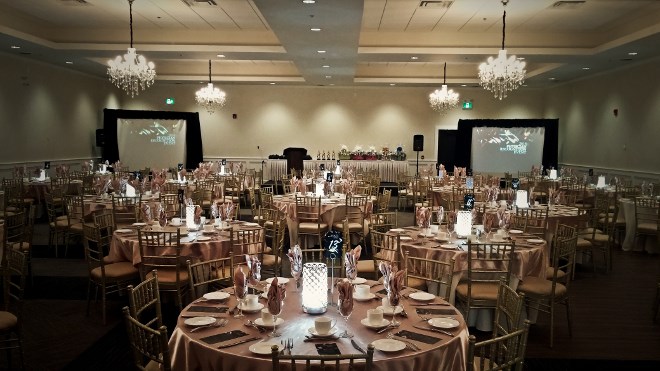 For generations of North Bay residents, The Zoo was the go-to nightclub when they wanted a night out on the town.

But for an entirely new generation, it will now be known as the Grande Event Centre, a premier banquet and conference hall, hosting meetings, weddings, conferences, and banquets.

In 2015, the downtown location underwent a remarkable transformation when the longtime nightclub was demolished to make way for the new facility, which was up and running less than a year later.

John Lechlitner serves as general manager. His family owns the Grande, along with Cecil’s Catering, and Cecil’s Brewhouse and Kitchen, a restaurant and in-house brewery located adjacent to the conference hall.

He said the decision to close down the club and open a new event location had been about eight years in the making. The family’s catering business was growing, and they could see demand for a new facility where they could host events.

“We started looking for a building that we could buy and renovate,” Lechlitner said. “We came very close to buying a couple of buildings but there was always something: it was in too much of an industrial area, or it was in an industrial area with zero parking, or the ceiling was too low.”

At the same time, Lechlitner noticed that entertainment trends had been moving away from nightclubs — people just aren’t going out the way they used to — and he sensed the time was right for the Zoo to close on a high note.

But the family was clear that any new facility would have to have plenty of space, high-end décor and furnishings, and appeal to a range of clients.

“We made sure we concentrated on décor that was classic, but still somewhat neutral,” Lechlitner said. “We put efforts into things like the chandeliers and a high-end portable wall. They’ll stand the test of time, but it is also a testament to the level of quality and service that we expect to do at the Grande.”

The facility is licensed for 298 people, but comfortably fits between 250 and 260. The hall features coffered ceilings, a classic white paint scheme, and chandeliers, and the space is fully wired for presentations and meetings.

The room can also be divided into two smaller spaces, with events running in each concurrently.

That same attention to detail continues even to the bathrooms, which feature separate toilet rooms, floor-to-ceiling tile, and granite countertops.

Walking through a series of sliding doors, guests can transition into an area dubbed the “Map Room,” which accommodates between 20 and 40 people. The standout feature of the room is the original 1890s tin ceiling tiles, which were cleaned and restored during the rebuild. The room is largely used for small meetings, intimate dinners, or cocktail hours.

During the Grande’s first event after opening — a guest appearance by Canadian Governor General David Johnston — the Map Room was used as a staging area before the main presentation.

From the Map Room, visitors can transition over to Cecil’s Brewhouse, featuring a broad menu whose offerings range from salads and pub fare to more hearty entrées. The centrepiece of the eatery is a SmartBrew brewing system, where visitors can watch as their favourite variety is brewed on site.

“We have seven core brands, and then others are rotated,” Lechlitner said. “Some are just seasonal, and some we do for the year.”

Lechlitner had wanted to bring craft brewing to the eatery for a long time, but with no real history of brewing in North Bay, he didn’t think they had the knowledge to pull it off.

Then three years ago, while attending a hospitality industry conference in Las Vegas, he encountered Brian Watson, a head brewer who was representing SmartBrew, which produces craft beer in small batches. Something clicked, and Lechlitner knew he had found his solution.

Cecil’s poured its first beer in July 2015 and now produces 11 varieties. Some are seasonal, and some are one-offs, like the Gold Rush they produced during North Bay’s 2017 Mining Week.

The system gives them the ability to brew up to 7,000 litres in a month, although Lechlitner said they typically do 1,500 to 4,000 litres monthly. But demand is growing.

“When we started, we thought, if we can sell half of the beer that we brew, that would be fantastic,” he said. “Seventy-five to 80 per cent of everything we sell is what we brew, and growing. Our average is up every couple of months.”

Provincial legislation prohibits Cecil’s from selling beer to go, but they can serve it off property, and Lechlitner said it’s become a popular request to have their beers on tap during weddings or other functions, either off-site, or at the Grande.

More than a year after opening, the facility is booked solid, the beers are gaining in popularity, and the catering division is stronger than ever.