“This is the day we were waiting for" 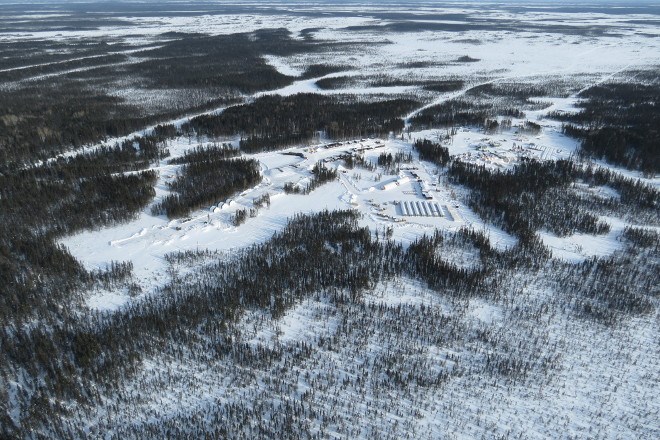 An agreement in principle to bring permanent access roads to three remote First Nation communities near the Ring of Fire was greeted with relief from the largest mine developer in the region.

“This is the day we were waiting for,” said Noront president-CEO Alan Coutts.

He was in Thunder Bay to hear Premier Kathleen Wynne’s Aug. 21 announcement that agreements have been struck with Marten Falls, Nibinamik and Webequie First Nations to build two corridors to connect those communities to the provincial highway system.

One proposed east-west corridor will be shared with the mining industry to reach the rich mineral deposits in the James Bay lowlands.

The road construction starts sometime in 2019, pending all regulatory approvals being in place.

A rudimentary government map shows the routing for an east-west to the Ring of Fire deposits beginning just north of Pickle Lake with branch roads leading into Nibinamik and Webequie. The route roughly follows the path of the winter road network.

The north-south route extends north from the Aroland-Nakina area along an industry route similar to the one staked by KWG Resources in 2011, but at roughly the half-way point from the Ring of Fire veers east to Marten Falls.

“We needed that certainty,” said Coutts, who hinted earlier this year that the entire project could be mothballed, including its Esker exploration camp, once their flow-through financing concluded in late September.

Noront’s investors were growing impatient with the province’s lack of progress in reaching an agreement on a road plan with the Matawa tribal council communities.

With an election rearing in June 2018, Wynne had been feeling the heat too.

In May, she issued a terse letter to the nine chiefs of the Matawa tribal council wanting “meaning progress in weeks, not months” in clearing the holdups on a road plan and settling all land management issues.

Of the five communities closest to the Ring of Fire, Wynne said at the press conference that it hasn’t been easy to achieve consensus among the Matawa leadership but reiterated her government’s desire to work with – and extend infrastructure to – any community that is willing and ready for development, when she was asked about the exclusion of Neskantaga and Eabametoong, who hold traditional territory claims on the corridors.

“I don’t think there’s any attempt on the part of this government or industry to isolate a particular community or to sideline anyone. This is about finding a way forward.”

Coutts said having a government-funded, First Nations-supported road “is a great outcome for us.”

It should make it easier to raise the $600 million to $700 million needed to finance its Eagle’s Nest nickel-copper project, the first mine in the company’s development plans.

Going off the province’s new timelines, Coutts envisions a five-year development horizon to get project financing in place and engineering work completed over the next two years prior to the start of the three-year construction period toward commercial production at Eagle’s Nest.

Soon after the news broke, Coutts said financiers were already in contact as the company plans to convene later this week with its largest shareholder, Resource Capital Fund, to negotiate an extension on a US$15 million loan.

The price tag for the roads have yet to be determined, pending detailed engineering work, said Wynne, who indicated her government will go it alone on funding the infrastructure.

Also among the questions left answered is who ultimately will own and operate the road corridors and if the infrastructure will be subsidized by government on an ongoing operational basis?

It’s not known how much progress has made from a special jurisdictional table formed by the government last fall, comprised of government and Matawa representatives.

Known as the “four-by-four group,” its role is to determine the governance issues for the road, including ownership and control, as well as issues surrounding area First Nations having a greater say on exploration permitting, land-use planning, and general land management issues.

Coutts said his company is open to the idea of paying for a toll road, but the issues of access and who uses and owns those roads remains to be negotiated.

“Whether we end up paying a toll, I don’t know, but certainly there will be some fees for maintenance of the road.”

He said Noront is prepared to share millions of dollars worth of feasibility, engineering, and environmental assessment studies – some acquired from Cliffs Natural Resources in 2015 – on these corridors in an effort to expedite the process.

In assessing the road proposals, Coutts indicated an east-west road would be ideal for trucking out high-grade nickel concentrate from Eagle’s Nest – a modest project with a 20-year mine life – and also serve as a haul road for its next-in-line Blackbird chromite deposit, Noront’s entry into the North American stainless steel market.

The Marten Falls access road would serve as the “first leg” in a north-south industrial road.

He refused to entertain any talk of a Ring of Fire railway, just yet.

“To make rail viable, you need to be moving 8 to 10 billion tonnes per annum. The market (for chromite) won’t support that at this point in time, even with a large-scale project. Even Cliffs was talking about moving 3-4 million tonnes.”

A north-south railway would be economical if the Ring of Fire camp scaled up with a number of other mining operations in the region, he said, and if the Ontario Northland Railway, the province’s transportation agency were involved.

Coutts said he’s talked to Ontario Northland CEO Corina Moore and her team about their interest in the long-term prospects of the camp.

“They know no railway is required anytime soon but they’re thinking long-term.”

In her remarks, Wynne said development in the Ring of Fire development can’t proceed without the participation of area First Nation communities.

To her critics who’ve accused her government of dragging its feet, Wynne said they’ve never wavered in their commitment to Far North development but stayed true to a “thoughtful and consultative approach” despite not having a road map to follow of successful resource development and benefit sharing agreements with First Nations.