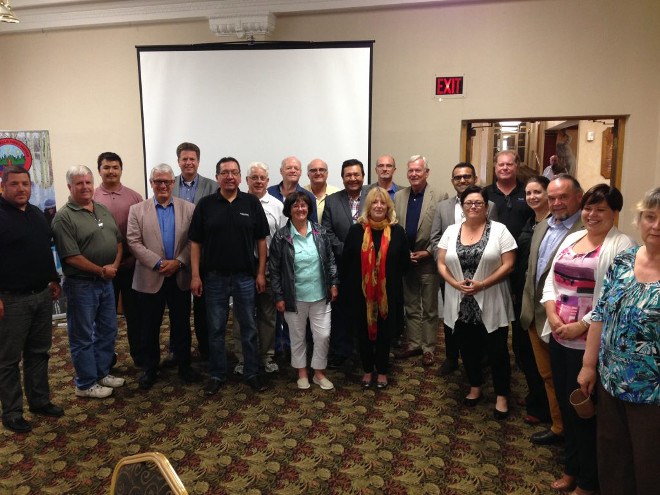 Marten Falls First Nation, one of the communities on the path to the Ring of Fire, staged an inaugural Mining Symposium in Thunder Bay, Aug. 8 and 9.

An Aug. 11 community news release said it was an opportunity for its members to meet the companies conducting exploration in the undeveloped and remote chromite and nickel belt.

Marten Falls is one of the communities in the Matawa First Nations tribal council that is asserting its traditional territorial over the exploration camp.

Participating in the symposium on the corporate side were Aecon, ATCO, Bold Resources, Greenstone Gold, KWG Resources, Noront Resources, and Wabassi Resources.

“The format allowed for the presenters to personally discuss and address the issues and concerns of the traditional land holders,” said the media release.

The event was deemed a success by all involved and community has plans to make the symposium an annual event geared to all the traditional land holders and companies in the area.

“We hope to provide this regional forum for engagement between mining companies, suppliers and First Nation members that will be used for providing project information and for partnership opportunities between companies and interested First Nations or their members,” said the release.

Marten Falls is the most mine-ready of the nine communities in the Matawa council and is being courted by the mine development companies with claims in the Ring of Fire.

The fly-in community of 250 is located 170 kilometres northeast of Nakina, and just east of where KWG Resources proposed a north-south rail corridor.

Marten Falls is also holding discussions with the provincial government on a community access road.

Northern Development and Mines assistant deputy minister Christine Kaszycki confirmed to Northern Ontario Business in late May that the province has been holding discussions with Marten Falls for a road that would connect the remote reserve to the provincial highway system.

The road alignment is being left to the community to decide.

If a route is chosen, it would relieve some of the pressure on the Wynne government to show signs of making tangible progress on mining and community-related infrastructure heading into the 2018 provincial election.

Environmental assessment planning begins on middle section of the Ring of Fire road
May 3, 2021 10:30 AM