Kenora is experiencing a brewing revival with a new entry into the Canadian craft beer market.
0
Jun 26, 2014 12:50 PM By: Ian Ross 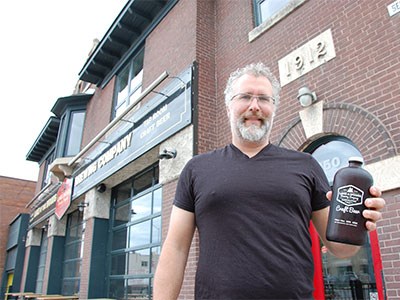 Kenora businessman Taras Manzie has revived an historic brewing tradition and an iconic landmark building with the restoration of a 1912 fire hall to create Lake of the Woods Brewing Company.

Kenora is experiencing a brewing revival with a new entry into the Canadian craft beer market.

Taras Manzie, a well-known local businessman, has brought the name of an historic 1900s brewer back to life with his Lake of the Woods Brewing Company, and restored a landmark fire hall in the community’s downtown.

Coming up on the brew pub’s one-year anniversary, Manzie was swatting a few morning mosquitos that had meandered into the former fire engine bay that’s been transformed into a breezy open concept tap room restaurant and street patio.

“Cool and wet and lots of bugs, just how we like it in northwestern Ontario.”

Since last year’s June opening, he’s been dealing with a whole new dimension of business as the popularity of his craft brew continues to grow.

The first pour had been a highly anticipated event ever since Manzie acquired the decrepit building three years ago after it was declared surplus by the City of Kenora.

He inherited a brick, concrete and stone 1912 structure where every system was in poor shape or near-failure. All the electrical and plumbing service was replaced and a commercial kitchen installed.

“We were retrofitting a 102-year-old fire hall into a 275-seat tap room with an active working brewery,” said Manzie, a former commercial lender who’s worked in Ottawa’s high-tech sector. “I’ve never done it before, but I’ll make it work.”

Together with some minority partners, he pumped $2.4 million into renovations and acquired a German-made brewing system imported from South Korea.

“We opened Canada Day long weekend and it was a gong show,” said Manzie. “Not everyone was trained, not everything was done, but we opened the doors.”

As the favourite gathering spot in town with on-site brewing, the place was jumping through July and August and occasionally they ran short on product, but the bugs were ironed out and they’re now brewing on a continual basis.

The building’s main floor contains the restaurant tap room, a retail store of off-sales, the brew house, and a packaging and distribution centre.

On the second floor is a lounge for up to 70 people with pool tables, dart boards, video games and pinballs for private events and social gatherings.

During the peak summer season, 83 people are on the payroll.

Lake of the Woods Brewing is one of about 1,200 microbreweries that opened in North America last year. Most are contract brewers. Very few invested in the bricks and mortar of an iconic building.

Built in the Romanesque style with arched windows, a gable roof and a 67-foot tall tower with a working bell, the fire hall was designated as an Ontario heritage building.

With recipes from brewmaster Bernie Weiland, they make a German-inspired unpasteurized beer with three house brands: a Firehouse brown ale, Sultana Gold blond ale and a Papermaker Czech pilsner, as well as some monthly and seasonal brews.

They’ve developed a stable of commercial clients and currently ship to more than 50 bars, restaurants and golf courses from Thunder Bay to Winnipeg.

Bottle sizes come in 64-ounce (1.89 litre) growlers and 32-ounce (940 millilitre) Boston rounds with the next evolution being quart sizes and 473-millilitre cans in multi-packs.

“Our biggest customer is our tap room, but we want to grow this business as a regional brewer,” said Manzie, who’s had discussions with the LCBO and Manitoba Liquor and Lotteries.

He’s also cast an eye south toward distributing into Minnesota and Wisconsin.

The demand for product means their space is close to max capacity.

“We’ve got some choices to make,” said Manzie. “The brewery and restaurant will always be in this building, but if we want to tap into the U.S., we’ll need another brewing facility.”

Besides providing local employment and pumping life into the downtown, the brewery’s philosophy is built around the core values of community and the environment.

For the restaurant, the company buys local, including from a Fort Frances meat producer, and Manzie goes to extra expense to use biodegradable takeout containers.

It’s also got him thinking about vertical integration by investigating whether they can grow their own specialty barley and hops through an agricultural partnership, instead of importing from other growing regions.

Manzie is considering a one-acre test batch for next year on a friend’s farm.

Not out of the question in the near future is a distillery operation with an appreciative nod to Kenora’s history.

Whiskey Island on Lake of the Woods is a mythical place that was once a drop-off point during Prohibition with the U.S. border 60 kilometres to the south.

“Micro-distilling is exploding and that’s another avenue we’re going to take a run at,” said Manzie. “Why sell 20 or 30 bottles of vodka a week when we can make it ourselves through a sister company and supply the marketplace?”