The Township of White River is known for many unusual things. There's a giant roadside thermometer along the Trans-Canada Highway professing this northwestern Ontario community of 840 as being the coldest spot in Canada.
0
Aug 18, 2009 6:54 PM By: Ian Ross 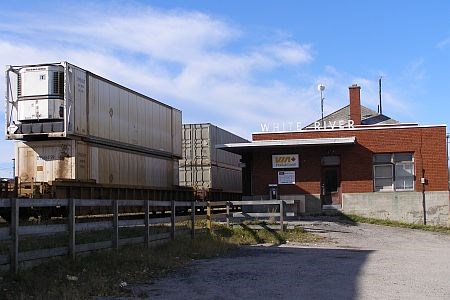 A whistle stop on the Canadian Pacific Railway, White River's former sawmill could have new life with a new partnership in place.

The Township of White River is known for many unusual things. There's a giant roadside thermometer along the Trans-Canada Highway professing this northwestern Ontario community of 840 as being the coldest spot in Canada.

It's the inspirational birthplace of children's storybook character, Winnie the Pooh and it's the western end of the line for the passenger rail Budd Car that runs from Sudbury.

It's also on the roster of downtrodden communities in Northern Ontario with a shuttered sawmill.

Soon that could all change.

A new company, White River Forest Products has purchased the former Domtar saw mill – closed since 2007 – and has plans to fire up the sawmill again, expand an existing co-generation plant for heat and power, add some wood pellet technology and get into some form of value-added forestry products.

The entire project worth a total of $90 million worth of development “is ready to roll out,” said White River Mayor Angelo Bazzoni, with financing through a combination of private and public financing.

“Our group is of the belief we have sourced enough capital to move forward,” said Bazzoni. “Funding is hard to come by, but we're told it's there. All we're waiting is for (Premier Dalton) and the rest of the (provincial) ministers to give the green light to move forward.”

“The intent is to diversify the product mix out of this mill from strictly commodities to some more value-added,” said Butler, who declined to get into specifics.

Butler is familiar with the White River mill having been a vice-president of sawmills and forest operations for Domtar. While he was posted at Domtar's Red Rock mill, White River was a fibre supplier and he oversaw the operations since 1985.

As a consultant, he participated in a government-funded study to explore and develop potential market for the wood fibre in the White River Forest management unit.

“We're putting together some options to get heat into the building this winter and start doing some clean-up and work that needs to be done,” said Butler.

Adding a renewable energy component with a stable revenue source is necessary to guide the company through “peaks and valleys” when dealing with softwood lumber.

The partners are waiting for a power of sale agreement from the province to proceed with an expansion of the mill's co-generation plant from 7.5 megawatts to 20.

Bazzoni said some power would be sold on the Ontario grid and some earmarked for a community district heating plan.

A Sustainable Forest Licence (SFL) for the White River Forest is being transferred from Domtar to the new company.

The company has a conditional letter from Natural Resources Minister Donna Cansfield. They are hopeful they can secure the licence this fall after going through the normal process of meeting the conditions of the SFL transfer.

There is enough area biomass available to support a 100,000-metric tonne per year pellet plant and the 20 MW co-gen unit.

The company filed an expression of interest with the Ministry of Natural Resources and Ontario Power Authority during their biomass procurement call earlier this year.

In working through the various approvals processes with different provincial government ministries, Butler said there appears to be no real roadblocks in their path.

Some former Domtar employees have come to the table offering a repayable loan to help the operation get re-started. Butler said having that kind of support is a big boost when talking to with government agencies and financial institutions.

When Domtar closed the mill in 2007, 236 employees were laid. The entire operation with a co-gen unit could create employment for about 200.

The company is working with a local labour adjustment committee to work through their future job and training needs.

An hour's drive to the east, the Township of Wawa and the Superior Aggregates Company are moving forward in developing a Great Lakes commercial dock in Michipicoten Bay. Bazzoni said it opens up opportunities for White River to start shipping out commodities by cheap marine transport. “We're just as excited about that project.”

There are a slew of new projects in the area coming on-stream involving First Nations hydro-electric plants and a 15-megawatt co-generation power plant in nearby Hornepayne. It could signal a regional economic revival.

Through his consulting business, Butler is also involved as a sub-contractor with Halifax Global Inc. in participating in a feasibility and area fibre study for the idled and bankrupt Marathon Pulp mill.

“We've done quite a bit of work behind what's required to re-start facilities and one of the first things required is patience.

“I want to see a lot of these small communities revitalized too. To do so, the mindset has to change from the traditional way of thinking where we were doing a lot of commodities to more value-added.”

Short-line railroader grants temporary reprieve to keep Huron Central running
Feb 24, 2020 9:04 PM
Comments
We welcome your feedback and encourage you to share your thoughts on this story. We ask that you be respectful of others and their points of view, refrain from personal attacks and stay on topic. To learn about our commenting policies and how we moderate, please read our Community Guidelines.