Canadore College and the City of North Bay are entering a bold new frontier in aviation and aeronautics.
Aug 12, 2014 5:44 PM By: Ian Ross 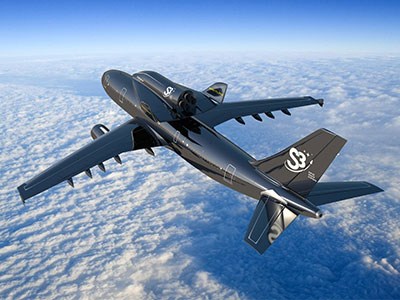 Swiss Space Systems has introduced the concept of an unmanned, reusable space shuttle to launch satellites into orbit. Canadore College in North Bay has signed on to facilitate some of that research and innovation.

Canadore College and the City of North Bay are entering a bold new frontier in aviation and aeronautics.

Swiss Space Systems (S3) is setting up a shop and testing site at the college’s aviation campus at Jack Garland Airport to allow the pioneering European satellite company to continue development of a revolutionary new system that delivers small satellites into orbit.

The announcement was hailed at a press conference in late June as a major foundational achievement in developing a new phase of growth within the college’s aviation programming and the airport’s burgeoning business park.

Founded in 2012, the Payerne, Switzerland-based company is regarded as a world leader in small satellite delivery and has a large international base of backers such as Dassault Aviation, Spaceport Colorado and Breitling.

“It’s a unique approach that was very attractive and, given the companies involved, it has a really good chance of being successful,” said college president George Burton, who added the alliance had been 18 to 24 months in the making after initial introductions were made at an Ottawa aviation trade show.

The S3 research team has come up with a reusable suborbital rocket-powered vehicle called the SOAR shuttle that’s designed to carry and launch satellites of up to 250 kilograms from its payload bay.

Using drone technology, the unmanned shuttle is delivered to high altitudes by piggybacking a ride aboard a modified Airbus A300 passenger jet.

This method is considered a cheaper way of putting satellites into lower- and mid-orbit than the more conventional means atop a rocket fired off a launch pad.

Burton said it’s an emerging segment of the space industry where the cost of entry isn’t so prohibitive.

Instead of launching a $300-million satellite, it’s now in the $20- to $30- million range. And with a reusable launch platform, the cost is further cut by 80 per cent.

“This is a baby step but a significant one and where it leads will depend on the health of the program,” said Burton. “We do know that the demand for mid-orbit satellites is growing exponentially around the world.”

A big drawing card for the company to come to North Bay is having a rather large geographic flight test corridor at its disposal.

Beginning this fall, helicopter drop-tests of a shuttle mock-up equipped with drone flight systems will commence and will continue throughout the 2014-15 academic year.

A next phase involves helicopter releases at an altitude of 5,000 metres to test flight systems and the craft’s aerodynamics.

The company will be using campus facilities for the first round of testing, but may expand to another airport location for the next phase. “That will be their decision. That will unfold as the program with S3 unfolds.”

The first test launches of the entire system are scheduled for 2017.

For Canadore students, it will offer an opportunity to rub shoulders with leading-edge innovators, said Burton.

“It’s going to be pretty cool for students to meet these individuals associated with the program who are going to spend time on our campus for a couple of years.

They’ll be exposed to technology that normally they wouldn’t get to see. And a side benefit is that a lot of that technology is going to stay with us for future classes to be exposed to and to train on.”

At the same press conference, it was announced that government subsidies from FedNor and the Northern Ontario Heritage Fund, worth a combined $4 million, are earmarked for a new campus addition; the Advanced Composites Fabrication, Repair and Test Centre.

Burton said it’s driven by the aviation industry’s extensive use of lightweight composite material as well as in a number of other industries.

The centre will have non-destructive testing capabilities to support companies like S3.

“The two (announcements) kind of go hand in hand with each other,” said Burton.

The arrival of S3 is tied into a wider vision for college programming which includes introduction of a UAV (unmanned aerial vehicle) operations and maintenance certificate at some point.

Canadore announced last year it was going to be the first Ontario college to offer this specialty 10-week program, but has had to twice delay the start date.

Burton attributed it to a “timing issue” with the UAV market changing so rapidly.

“It’s still percolating and when the time is right we’re going very public with it and it’s going to be quite spectacular.”