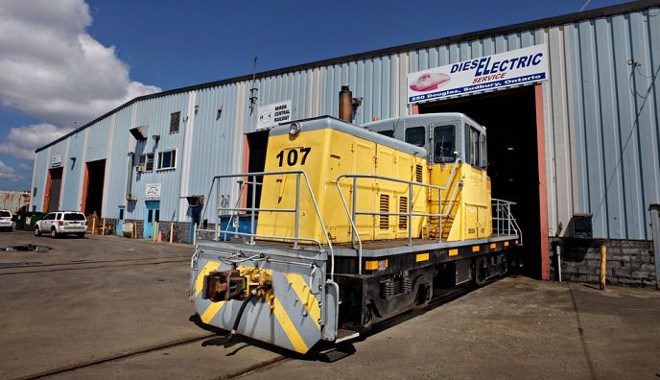 Diesel Electric Services is proposing a homegrown solution to either take over, or partner up with, Ontario Northland Railway, to provide better service and greater stability for shippers between Sault Ste. Marie and Sudbury.

“We have the capacity to take that on,” said Jason Carriere, general manager of the 75-employee company.

Diesel Electric performs the intermodal switching for Canadian Pacific Railway (CP) on the freight traffic that comes off the 278-kilometre Huron Central line, operated by Genesee & Wyoming Canada (G & WC). Diesel Electric is part of the Milman Industries group of companies in Sudbury that collectively employs 500.

“We’d like to partner with the government and make something legitimate out of this line,” said Carriere.

“We have some great ideas on building up business, not just on survival, but on growing the business and having some development here in the North, with the government who already runs a railway line.”

Carriere and his boss, Milad Mansour Sr., president of Milman Industries, were responding to a Northern Ontario Business article that Montréal-based G & WC might be in line to receive a combined $40-million federal and provincial subsidy now that U.S. regulators have approved the sale of its Connecticut parent company to Brookfield Asset Management.

Both men are encouraging the government to explore other railroading options and alternatives, beyond Genesee & Wyoming.

“From our perspective,” said Carriere, “if the government is going to give away $40 million to an American company, why would they not support a Northern Ontario business?"

At its Douglas Street shop in the downtown Sudbury rail yards, Diesel Electric handles all unloading and reloading of freight onto rail cars for Canadian Pacific,or onto highway transports for delivery to customers in southern Ontario and the U.S.

At their Foundry Road shops in the city’s east end, they repair CN locomotives, sell and lease rolling stock, perform safety inspections, salvage wrecks, and do track work for large railways and spur lines into mines, steel and lumber mills from Vaughan to Thunder Bay, as well as working internationally for mining companies in South America.

During the last round of track reconstruction on the Huron Central in 2011, Carriere said their company ran a ballast train for Genesee & Wyoming, and built a $400,000 spur line into an aggregate quarry through a partnership with Serpent River First Nation.

“We have the capability,” said Mansour. “We’re not a fly-by-night (company).”

Last October, for the third time in a decade, G & WC indicated it would discontinue service in early 2020 if the provincial and federal governments can’t deliver on a $40-million track maintenance package.

The railway maintains the Huron Central doesn't generate enough revenue to support the capital requirements to do necessary track repairs and required crossing upgrades all on its own.

Canadian Pacific actually owns the Sault-Sudbury line but doesn’t contribute any money toward its upkeep. Instead, the operation is contracted out to Genesee & Wyoming. G & W's operating philosophy is to treat each short line as a stand-alone business unit that must be profitable.

“The issue facing the rail line is the need, due to insufficient traffic volume, for a public-private partnership for the required capital investments,” said Genesee spokeswoman Claudine Bois in an email. “Once that occurs, HCRY can implement a sustainable, long-term operating plan."

The fact that the railroader reported US$2.35 billion in sales in 2018 has sparked a stream of online criticism of government providing ‘corporate welfare’ to a highly profitable company.

Mansour answers unabashedly they would “absolutely” snap up the $40-million subsidy if the government offered it to them to do the track work.

“If the opportunity arises where we can add jobs, we’d love to do that.”

In the fall of 2018, facing a similar year-end deadline from Genesee & Wyoming, the Ontario government provided $980,000 to keep the service going for another year in order to buy time to work out a long-term solution.

Both said, within the last year, they've been approached, received encouragement, and had discussions with CP Rail, Ontario Northland, and provincial cabinet minister Greg Rickford and Vic Fedeli to gauge the company's interest in picking up the rail service, or arrange a public-private operational arrangement with the province.

Carriere said they’ve had preliminary talks with Ontario Northland, which wants to build up its rail freight business.

Carriere and Mansour Sr. said those discussions haven’t progressed beyond the exploratory stage. Along with Canadian Pacific, they feel in a holding pattern in awaiting direction from both levels of government as the clock ticks.

“I think everybody is almost waiting to see what happens,” said Carriere. “The feeling I’ve got, if they (Genesee & Wyoming) pull the pin, then everybody’s going to get to the table and it’ll be mass chaos in trying to make something happen.”

“Regardless,” said Mansour Sr., “if they call us tomorrow, we go.”

There's a commonly held fear, Carriere said, that the loss of the Huron Central puts thousands of transport trucks on the highway, pinkslips some 40-some railway workers, and threatens the viability of industry in the area.

In pointing to a rail map of Northern Ontario, Carriere emphasized there is enough infrastructure and various ways to move goods to market.

“Are you going to lay guys off if the Huron Central is gone? Absolutely not. You can get the cars to destination.”

Among Mansour's business ideas is providing passenger service between the Sault, Sudbury and North Bay, down to Toronto. It would require a higher standard of track bed upgrades to accommodate faster moving trains.

Since 2000, Diesel Electric has maintained Via Rail’s Budd Car, which operates between Sudbury and White River.