With a federal election looming this fall, Sault Ste. Marie is charging full-steam ahead in chasing money from Ottawa for its commercial harbour project.
Apr 9, 2015 1:54 PM By: Ian Ross 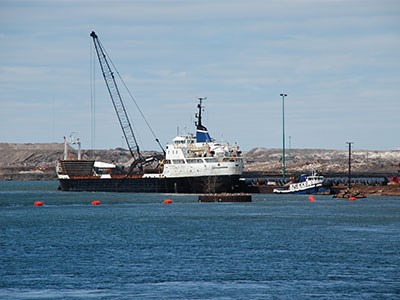 The City of Sault Ste. Marie and Essar Steel Algoma are laying the technical groundwork for an expanded public harbour complex with a target completion date of 2017.

With a federal election looming this fall, Sault Ste. Marie is charging full-steam ahead in chasing money from Ottawa for its commercial harbour project.

The municipality, Essar Steel Algoma and their consultants have taken an accelerated approach toward speeding up the pace of technical work with an aim on presenting a “shovel ready” project to the feds by mid-summer.

By that time, said Jerry Dolcetti, the city’s engineering and planning commissioner, they should have a well-defined business case and harbour design.

The consulting team of KPGM and AECOM was recently hired to navigate the first phase of an in-depth study covering all aspects of the $120 million to $150 million project including detailed engineering, infrastructure planning, environmental assessment, anticipated freight volumes, and First Nations consultation.

The proposed project funding formula would be split three ways between the feds, the province and industry.

They’ll be under a time crunch with an election approaching and many communities across Canada jockeying to access money from the $14-billion Building Canada Fund.

Dolcetti said they hope to submit their port application by August, if not sooner.

“We’ve instructed our consultants to move on this immediately. We’re asking them to set up the meetings to make sure the application information is in place.”
The project timeline calls for the port to be in business by 2017.

The city is pitching the harbour project as part of a larger regional multimodal transportation initiative benefitting all of the North, with the Sault positioned as a distribution centre for incoming cargo and a global export facility.

The Sault is located on the St. Lawrence Seaway system, has both CN and CP Rail connections, and is located across the border from Michigan at the northern terminus of Interstate 75.

“It’s just not a Sault Ste. Marie port, it’s not an Algoma port, it’s going to be beyond that,” said Dolcetti.

Both Dolcetti and KMPG believe they need to refine what’s already a solid business case that exists with Essar port users like Tenaris Algoma Tubes, Purvis Marine and Superior Slag, but there are opportunities on the horizon to handle forest products, road salt, container freight, maybe even exports of Ring of Fire chromite.

“It’s not just the steel industry that’s interested in being at the port, it’s a number of other industries that make up a very strong case.”

The latest plan is for Essar to sever off 440 acres of industrial land, west of the steel works, to be set aside for a public port and storage area with 3.5 kilometres of dock space, with the possibility of scaling it up to 1,000 acres.

Essar would be one of a mix of tenants under the Port of Algoma operating banner.

Should the Harper government call an early spring election, Dolcetti said they’ll be undeterred, feeling the business case is so strong that the party power will see the port’s benefits.

Constructing a public port has been on the city’s agenda for decades. Only in the last couple of years has it risen in profile as the city’s primary industrial project.
Essar Steel has the only large-scale commercial port complex in the city, but it’s generally considered a private harbour although outside companies are permitted to use it or lease land.

With Essar contemplating doubling its steel production in the next few years, more raw material will be arriving by ship, which will put pressure on the existing docks, which badly need improvement.

Dolcetti said the current shore laydown space for cargo is limited and shoals in the St. Mary’s River mean limited space and depth for ships to manoeuvre.

By next October, Dolcetti said they should have drawings ready to release to potential contractors to start construction next spring, a process that would take a year to a year-and-a-half to complete.