The International Bridge, which joins Sault Ste. Marie with its counterpart U.S. city, will get an underwater inspection next week.
0
Apr 20, 2015 4:51 PM By: Northern Ontario Business Staff 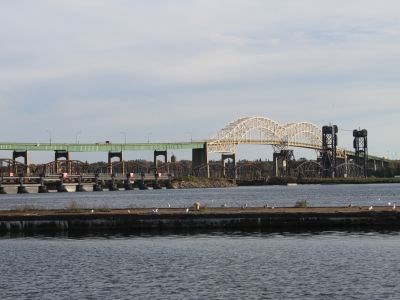 The underwater pier of the International Bridge will get an underwater inspection next week. (FILE PHOTO)

The International Bridge, which joins Sault Ste. Marie with its counterpart U.S. city, will get an underwater inspection next week.

According to a news release, the work involves inspecting the International Bridge’s piers below the water line in the St. Mary’s River. The inspection will be performed by qualified divers and engineers using scuba gear and digital recording devices to examine and record the condition of the piers in areas not visible above the water line.

The inspection — expected to cost $51,000 — is mandated by the Federal National Bridge Inspection Standards (NBIS) and must be performed every five years. The last inspection was conducted in 2009. The current inspection was originally scheduled for 2014; however, due to high water flow in the St. Mary’s River in 2014, the inspection was deferred until this year.

“Fifteen of the 62 bridge piers are in water,” said bridge engineer Karl Hansen in the release. “The previous inspection in 2009 found that those submerged components of the bridge were in satisfactory condition.”

A boat and dive team are scheduled to be working at various pier locations from April 27 to April 29.

Short-line railroader grants temporary reprieve to keep Huron Central running
Feb 24, 2020 9:04 PM
Comments
We welcome your feedback and encourage you to share your thoughts on this story. We ask that you be respectful of others and their points of view, refrain from personal attacks and stay on topic. To learn about our commenting policies and how we moderate, please read our Community Guidelines.