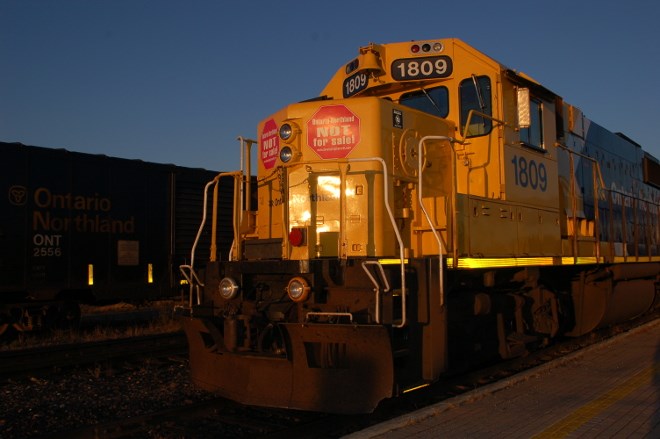 The Ontario government cut passenger rail service on the Ontario Northland Railway between Cochrane, North Bay and Toronto in 2012. Efforts to restore this service have stalled. (File photo)

A lack of funding to complete a conceptual plan to restore passenger service on the Ontario Northland Railway has put a grassroots revival effort on hold.

North Bay’s Éric Boutilier, founder of All Aboard Northern Ontario, has called an indefinite halt on his initiative to finish the plan while he ponders the future of the advocacy movement he launched in 2017.

The group needs between $10,000 and $15,000 to finish the report and book a facility to present it in a town hall meeting format.

“We’re running out of options to try to finish this,” said Boutilier. “It’s just obstacle after obstacle that we’re facing, and we have better things to do with our time.”

Boutilier’s attempt to raise funds online has only amounted to a few hundred dollars.

Many of the municipalities and government funders he’s approached express interest but show empty pockets.

All Aboard released a teaser last October of their plan to restore the popular passenger rail service that was cancelled by the provincial government in 2012.

Boutilier’s group has a conceptual plan to re-introduce service on the Ontario Northland Railway between Cochrane, North Bay and Toronto that could start as early as 2019 and increase in frequency by 2021.

The old Northlander name would be replaced with a revitalized service called the Northeast Lynx.

The report would outline the startup and annual operating costs, and identify the rolling stock and infrastructure requirements to make the case to convince the province to bring back the train.

It would generate work for Ontario Northland’s refurbishment shops in North Bay to recondition serviceable locomotives and coaches available on the used equipment market.

The report’s author and the group’s rail consultant, Greg Gormick, said he’s put off finishing the plan to work on other projects.

“Greg and I have gone as far as we can in trying to put together a credible plan,” said Boutilier.

Since starting his fundraising push a year and half ago, Boutilier estimates he’s had two dozen meetings with government agencies and potential funders, but has been told that budgets are limited or they choose to pass the buck to other levels of government.

What public transportation funding is available, he discovered, the criteria is limited to air travel.

Most disheartening, he said, is the lack of support from his hometown of the City of North Bay, with whom he’s met “five or six times” with politicians and city staff, including Mayor Al McDonald .

Boutilier is mystified on why there’s been hesitancy on North Bay’s part to endorse this proposal.

“It’s perplexing of why a community as large as North Bay – with what it stands to benefit with the service and jobs associated with this initiative – on why there is hesitancy to get involved.”

Erin Richmond, North Bay’s manager of economic development, returned a call to Northern Ontario Business, but referred the matter to Mayor Al McDonald’s office, which has not responded.

Last summer, All Aboard’s concept seemed to have the support of Nipissing MPP and provincial Finance Minister Vic Fedeli.

But to Boutilier’s knowledge, the Ontario Northland Transportation Commission has not received a provincial directive to move this initiative forward, and support from within the Crown agency for their project has softened.

Boutilier said Fedeli made an offer to host a town hall meeting once the report was completed but withdrew it without an explanation.

During last summer’s provincial election, the now in-power Ford government said it would commit $30 million in startup capital with a $15-million annual operating subsidy. Boutilier openly questions where those figures came from.

An emailed response from Fedeli’s Queen’s Park office thanked Boutilier and his group for his efforts.

“In the Fall Economic Statement, our government committed to review initiatives to meet Northerners’ transportation needs, including passenger rail and bus services. This work is an important part of the government’s plan to promote economic development and keep people moving in the North. We will have more to say on this in future.”

Since launching All Aboard in 2017, Boutilier estimates he’s spent $2,100 out of his own pocket to push this initiative.

“At the end of the day, I’m not getting paid to do this. I’m doing it because I want to influence public policy and try to improve the little bit that I can of the community and region that I live in.

“I’m realizing that in life if you want to effect change in a measurably way, you’ve got to have deep pockets. It’s unfortunate that such a simple issue on getting people to and from is becoming more complicated and harder to do because of the political nature of the issue.”

Further complicating matters, Boutilier said, is the presence of other passenger advocacy groups, which has caused confusion among politicians.

But rather than repeat the same talking points, Boutilier said they wanted to craft a plan that government could adopt.

“We are all looking for passenger rail for our communities. It’s how we go about it that’s different.”

Some rail supporters propose Budd Car service, which, he said, is prohibited by CN Rail on its track between Sault Ste. Marie and Hearst, and from North Bay to Toronto.

Others favour the return of passenger service on the Huron Central Railway between the Sault and Sudbury, where track speed is limited to 10 to 15 miles per hour, which is unmarketable, Boutilier said.

“It’s unfortunate that the waters are muddied because I still believe that a case can be made for the Northlander corridor, but it’s got to be done properly.”