The Wynne government is tying up a controversial loose end prior to an election call by announcing that the Ontario Northland Transportation Commission (ONTC) will stay in public hands.
Apr 4, 2014 5:06 PM By: Ian Ross 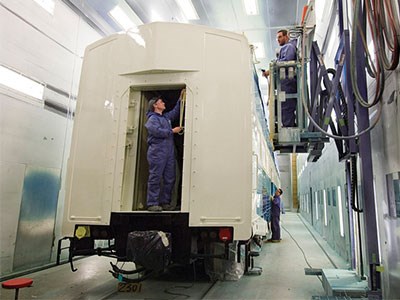 The Wynne government is tying up a controversial loose end prior to an election call by announcing that the Ontario Northland Transportation Commission (ONTC) will stay in public hands.

But its telecommunications division is being sold to Bell Aliant.

Northern Development and Mines Minister Michael Gravelle announced in North Bay this morning that Ontario will continue to operate the motor coach, the Polar Bear Express passenger service to Moosonee, rail freight, and the rail car refurbishment shops of the Ontario Northland as a Crown-owned agency.

The Wynne government also promises to make more than $23 million in “strategic investments” to the North Bay-headquartered commission.

The money will be used to purchase new motor coaches for its bus line and to refurbish rail coaches for the Polar Bear Express.

An April 4 government press release said this will provide work for the ONTC’s refurbishment shops.

The proceeds from the sale of Ontera, the ONTC’s telecommunications arm, include $6 million in cash. The government said this will result in “long-term revenue to ONTC estimated at $10 million.”

The province and Bell Aliant each plan to spend $15.1 million as part of a public-private investment in telecommunications infrastructure in northeastern Ontario.

"I am very pleased to announce that motor coach, PBX (Polar Bear Express) rail freight, and refurbishment will all remain in public hands,” said Gravelle in a release.

In March 2012, the provincial Liberals led by the Dalton McGuinty government announced it was putting all of the Ontario Northland’s business assets on the auction block through a special divestment process, calling the ONTC a chronic money loser and saying that its business model was unsustainable.

Passenger service between Cochrane and Toronto was chopped in the fall of 2012.

But outrage by municipal and industry leaders in northeastern Ontario caused the reformed Liberal government under Kathleen Wynne to consult with stakeholders in looking at other options.

Paul Goulet, the ONTC’s president-CEO, said the province’s investment in new rolling stock means that “real transformation and restructuring of the ONTC will continue. As Ontera joins Bell Aliant, we are hopeful that combined with new investments, Ontera’s legacy of achievement and excellence will continue to thrive under new ownership in the years ahead.”

Goulet worked with the ONTC unions this winter to deliver a new restructuring and business plan to keep the agency in public hands. The government had said it wanted to make a decision on the ONTC quickly.

For North Bay Mayor Al McDonald, two years of “great uncertainty” for workers at the ONTC is over.

“My number one priority all along was to save jobs and bring certainty to the future of the ONTC. We welcome the $23 million investment in our buses and refurbishment shops which not only retains jobs but builds enormous potential for future job creation here in our community. This announcement ensures that the ONTC, which has been headquartered here in our city for over 100 years, will remain and bring stability and confidence to our community.”

The Federation of Northern Ontario Municipalities (FONOM) issued its support for the government’s decision to keep the core freight and passenger service.

“FONOM has been fighting from day one to protect ONTC from divestment,” said FONOM president and Kapuskasing Mayor Al Spacek, “and after a long and at times difficult process with the province, we are pleased to be at this point.

“We think it is important for all stakeholders, including the labour unions, municipalities,key customers and users of ONTC, industry, and the province, to continue to work together to implement this viable solution for ONTC.”
Timmins Mayor Tom Laughren was pleased that the bulk of the ONTC’s assets will stay intact.

“While we are not happy to see Ontera being sold, we are appreciative of the minister’s efforts to preserve core transportation infrastructure that is critical to the conomic vitality of Northern municipalities,” said Laughren, FONOM vice-president.

“It is our hope that the ministry will sincerely work with Bell Aliant to enhance Ontera’s service offerings for Northern communities and businesses through increased infrastructure investment.”
McDonald, Spacek and Laughren all served on Gravelle’s special ONTC advisory committee.

But the sale of Ontera is raising red flags with Nipissing Conservative MPP Vic Fedeli, the former mayor of North Bay.

“Considering the (provincial) auditor general said it will cost the government $820 million to sell ONTC, how much did it cost to divest Ontera?  What return did the government get on the more than $20 million previously invested in fibre optic ring infrastructure in northeastern Ontario through Ontera?” said Fedeli.

Last December, a special report by Ontario's auditor general spelled out that if the divestment of the ONTC had proceeded, it would have cost taxpayers $820 million instead of saving $265.9 million over three years as the government insisted in 2012.

“The auditor general noted in her ONTC report there would be costs for “subsidies that may need to be paid to potential buyers,” Fedeli said. “Did this sale in fact cost taxpayers money as we’ve been warning since the fire sale was announced?”

Fedeli called the announcement “another Liberal pre-election ploy to try to buy votes” and added the Wynne government has failed to explain how it plans to utilize the ONTC in developing the mineral deposits in the Ring of Fire.