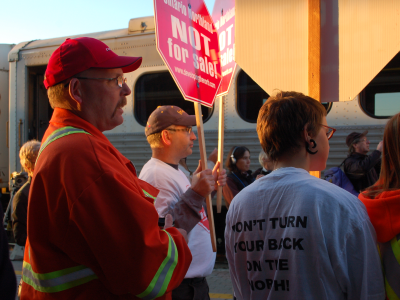 A group gathers on the platform at the Cochrane train station.

In a land so bright and new

It brought prosperity to people near and far . . .

Something to sing about

This line of ours."

The rail tracks screech and groan as the Northlander leaves the Cochrane train station Sept. 28, shortly after 8 a.m., as it has done many times before. But this day is different. It's the last time the engine will pull out.

There's a group of photographers set up beyond the train to capture the departure for posterity and people remaining on the platform wave to the passengers.

Despite a previous rally inside the station and on the platform, led by impassioned Cochrane Mayor Peter Politis, there's an underlying air of melancholy and loss.

The Ontario government announced the divestment of the Ontario Northland Transportation Commission (ONTC) in March. Northern Development and Mines Minister Rick Bartolucci said while the business is good, the business model is not.

"Stagnant ridership, along with the ONTC's unsustainable financial path, are key factors in (the) announcement," he said.

While the operation of the Polar Bear Express is to be ensured, all rail freight and refurbishment assets, as well as Ontera telecommunications, are to be divested. The Northlander train between Toronto and Cochrane was cancelled (Sept. 28) and is to be replaced with an "enhanced" bus service, while bus services will be tendered to other operators.
The ministry said since 2003, the government increased ONTC funding by 274 per cent. However, demand for services has stagnated. The subsidy on the Northlander train was $400 per passenger.

Ongoing protests and denouncements across the North couldn't sway the government to change its decree.

A large group, including school children, greet the train in Englehart.

"When this country was young and new

Cochrane resident Richard Warrell sits in silence as the train slips out of the station. He worked for the Ontario Northland Transportation Commission (ONTC) for 31 years in the town as a ticket clerk and has since retired. When asked how he feels about being on the last train, he said it is "kind of like a funeral."

He carefully takes out some photographs from an envelope which depict the intertwining of the rails with his life. Grandparents seeing a son off to war at the station, a younger self taking part in the Northlander's 25th anniversary, a sister and her friends posing on the platform.

Many others are here for the same reason. Nine train enthusiasts known as foamers (they foam at the mouth at the sight of a train) from southern Ontario make themselves comfortable and enjoy the legroom available in the coach.

The previous night they visited the rail shops in Cochrane and relished the tour as an added bonus.

"I have waited five years to travel on this train," says Anthony Sampogna.

His colleague Brendan Frisina is recording the track sensors.

"It's a trip we wanted to make. You just don't expect it to get chopped," he says.

Two women console each other as the train stops in Cobalt.

"People came from everywhere to settle and live . . .

Wynn Stitt walks the aisles to collect passenger tickets. It's not his last day of work but the last six months have been stressful. He's been filling in at rail yards in Cochrane and North Bay and copes by

not planning beyond each day.

"I have 24 and a half years with the company," he says. "There are things our family wants to do and buy but we are holding off."

The uncertainty has taken its toll and when asked if he has looked at other jobs, he says he isn't sure what he would do. Still, he is pleasant and polite with the passengers, as are all staff on board and at the stations.

The train passes several rail crossings where cars are parked and photos are snapped as a piece of history rumbles by and a last goodbye is waved. The fall colours and a sunny day add a majestic backdrop as the landscape of northeastern Ontario flashes by.

There are groups of people waiting for the train at all the stations and stops. Politis gets off and addresses the crowds, many with Not For Sale placards. Other passengers climb on, and others disembark. School children wave enthusiastically.

In Cobalt, two older women console each other as they sob uncontrollably. Their grief casts a sombre veil over those witnessing the display.

"We became the railway that we now are today"

Lorne Fleece of North Bay retired after 39 years with the company working in telecommunications. He says it is a sad day but changes in life are to be expected.

"Canadians face adversity and we adapt. And we can face this change," he says.

He experienced many changes with the company during his career but said it was a "wonderful place to work. You knew everyone."

He is full of stories and eagerly shares them with fellow passengers. He dons a vest adorned with badges, some rare like the Red Cap one he points to.

"I have gone past the Northern fields

And seen the harvest yields"

There's a long history of the Ontario Northland Railway in Desire Sasseville's family. The Kirkland Lake resident put in 34 years with the company, his father worked for 50 years, a brother worked 36 years and his son is employed as a ticket agent.

He gets teary eyed and emotional as he talks about the demise of the train and worries about his mother who uses the train to attend medical appointments.

He muses that perhaps he might have to move away one day if he requires transportation to southern Ontario to seek medical treatment as well. A crowded bus is an unlikely option for older travellers going long distances.

"I'm sad," he says as his eyes well up. "But I got to meet some incredible people."

"Past pulp and paper mills

And the Otter Rapids dam"

Gerry McCausland wears a 70-year-old conductor cap that belonged to his grandfather as he goes about his duties. He started working for the company in 1976 in various capacities before becoming a conductor 10 years ago.

There's a lot of uncertainty for the employees and he feels the decision to cancel the train affects all the towns along the line.

"You have to just keep your head up," he says.

"Yes we grew big and we grew fast"

Joan Connors of New Liskeard sits alone with her thoughts as she watches the landscape unfold before her. She grew up in railway section houses along the line and she rhymes off sidings and places that no longer exist.

She reminisces about a good life as a child and how her family has been in the area longer than the railway. She will be picked up in North Bay by her husband who drove down from New Liskeard.

"I have watched while the shafts of mines

Climbed in the Northern sky."

Politis laments the destruction of a 110-year-old tradition in the North and vows to keep fighting. It's a done deal with this government but he ponders a change of heart if another party gets elected. His own town was founded because of the train and the railway is the third largest employer in the community.

"A piece of our heritage has been taken away," he says. "If the rails could talk."

"And Temagami where the fishing's fine"

The train passes a rail crew on a siding south of Temagami and some of the orange-vested workers put their hands over their hearts while others snap photos. Cottagers wave as they stand on their deck.

The train nears North Bay and most of the 150 passengers seem settled into their seats as the train lulls some into a light sleep.

Regular passenger Natalie Ernest, who lives in Sudbury but calls New Liskeard home, said medical issues made her family head to Toronto on the train from the time she was two to 16.

"It was the only real mode of transportation," she said. "It's a vital link."

She and others bemoaned the loss of the sleeper car about 10 years ago. In North Bay, she will travel the last leg of her journey by bus.

"I'll miss it. It's much more comfortable."

"From the Laurentian Highlands

to the Moose Factory Island"

The train rolls into North Bay for a short stop before continuing to Toronto. In 10 minutes, the last northbound train will arrive at the station to head to Cochrane.

Before it slows, a female voice over the loudspeaker says "it has been an honour and a privilege to serve you. Thank you for your continued support."

Her voice breaks and she begins to choke up.

"Something to sing about

This line of ours."