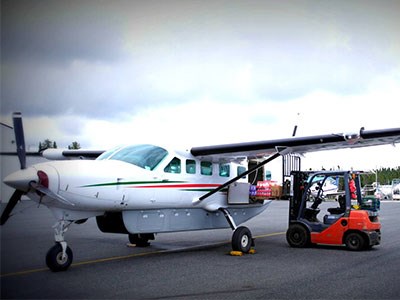 Thunder Bay’s North Star Air is building support with area First Nations through a revenue sharing program that gives the communities an ownership stake in the regional air carrier.

The Thunder Bay-based air carrier held a Nov. 7 ceremony at the company’s headquarters to officially present the payments to Sachigo Lake and Muskat Dam First Nation.

The agreement was originally reached on June 19 to extend air service into the communities and start a revenue sharing program whereby a percentage of North Star’s revenues generated from this partnership are given back to the communities for future investments in economic development.

Mary Ellen Thomas, the airline’s head of commercial and public relations, declined to say what that percentage is and how much money could potentially flow into these communities, but the partners will have a “considerable” ownership stake in the company.

Thomas said North Star CEO Frank Kelner is always looking for partnership opportunities to broaden the company’s reach and grow the passenger and freight side of the operation.

And the First Nations are always looking for ways to attract meaningful investment to their communities.

Thomas said similar arrangements are in place with other partner communities including Cat Lake, Deer Lake and Neskantaga.

“We’re looking at more First Nation partnerships and then we’re looking at expanding more services on the passenger, freight and fuel side of things.”

The company also took the opportunity to announce it is increasing the number of flights per week out of Sioux Lookout, to Muskrat Dam, Sachigo Lake and Weagamow (Round Lake) from four days a week to seven, starting Nov. 15. These flights include a connection to Thunder Bay.

“The more service that goes up, the more support we get from the communities,” said Thomas, “and that’s how the revenue sharing works.”

North Star’s freight subsidiary, Cargo North, is making an impact in the northwest with the arrival last year of two large capacity aircraft, the twin-prop Basler BT-67, a modernized version of the DC-3 aircraft.

Though the company is clearly in expansion mode, Thomas said the carrier wants to firm up its business relationship with the communities it currently serves before announcing any future plans to fly into new markets.

“Right now the direction is the people that came aboard first will be well looked after and we’re always exploring further out with our charter business. It’s not (restricted) to our region, it’s international.”

On the air cargo side of things, Thomas said they’ll go where the demand is.

“We’re looking at expanding and at the moment I can’t say what we want to do on the freight side.”