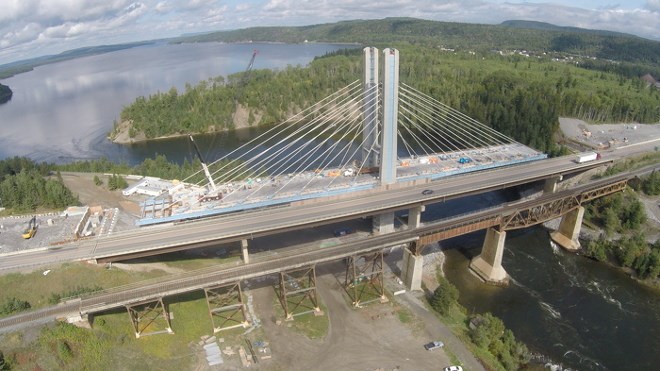 A report released by the Canadian Trucking Alliance (CTA) follows on the heels of federal Transport Minister Marc Garneau’s July unveiling of the $2.1 billion Trade and Transportation Corridors Initiative. The government calls it a "merit-based" infrastructure spending program, spread out over 11 years, devoted to improving border crossings, road, rail, aviation, and marine connections.

In the report, the CTA gathered input from its provincial associations on how the money should be spent on a province-by-province basis.

For Northern Ontario, the truckers want key traffic chokepoints on the Trans-Canada Highway addressed through lane expansion and bridges on Highways 11 and 17 in northwestern Ontario. It was identified by the CTA as being a “top priority” to support east-west trade and the growth in mining and other resource-based activity.

They pointed out that commercial vehicles carry $100 million in goods daily across the new Nipigon Bridge.

But as the span’s unexpected closure proved in 2016, there needs to be extra highway capacity and built-in redundancies along key trade routes to keep domestic commerce moving, said the CTA.

“As noted by the Northern Ontario Multi-Modal Transportation Strategy: traffic forecasts have found that over the next 25 years commercial vehicle flows will drive the overall growth in traffic volumes on the highway network in Northern Ontario,” said the report.

The CTA is a federation of provincial trucking associations representing more than 4,500 carriers.

“While not entirely exhaustive, the list represents specific projects and general areas for consideration. In each case, funding for road-based infrastructure would significantly improve the trucking industry’s ability to carry the nation’s domestic and international trade,” said CTA president Stephen Laskowski