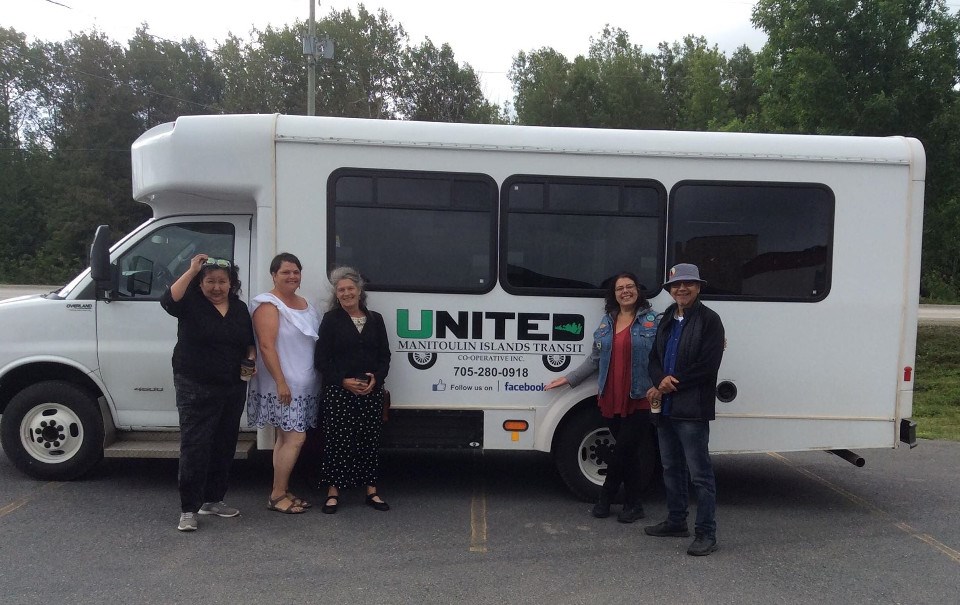 Riders availing themselves of Manitoulin Island’s brand new public transit system can do so for free, at least until Jan. 6, 2021.

By that point, United Manitoulin Islands Transit (UMIT), the non-profit, multi-stakeholder co-operative overseeing the system, is hopeful a new plan will be in place that enables the bus service to be offered at no or low cost on a permanent basis.

Launched in August, the bus makes two runs a day – in the morning and late afternoon/evening – following a circuitous route around the north and central parts of the North Channel island.

The 14-passenger bus is owned by UMIT and run by a private transit operator.

Though it’s still relatively new, Johanna Berti, who was appointed UMIT’s executive director in March, said residents are slowly but surely taking up use of the service.

UMIT had originally planned to start operations in June, but quickly realized that goal was unrealistic given most people weren’t travelling as much in the midst of a pandemic.

Yet the group believes a free public transit system can play a critical role in helping the island recover in the wake of COVID-19.

“The thing that we could see so clearly was how this could be a major kickstart to the economy,” Berti said.

“People are going to need to move around, and the last thing they’re going to be able to do is buy or maintain a second vehicle, so if we can come in with an affordable service right at that point, they can bridge that gap, and it should be able to help everything open up again.”

Operations are currently being funded by a $500,000 Community Transportation Grant, which the group secured from the provincial government last fall.

But in order to maintain a free service over the long term, UMIT has to guarantee continued capital, and that’s the group’s immediate focus.

Although it’s early in the planning process to share many details, Berti said, UMIT is looking for corporate sponsors to kickstart fundraising for the service.

Sponsorship, combined with the Community Transportation Grant and a share of the province’s Gas Tax Program, should be enough to sustain the service at low or no cost to the rider, Berti said.

“That is the skeleton I’m working on right now to see if we can maintain a free service that actually gives everybody something and requires the minimum amount of input at the front end, because very few businesses or municipalities in Northern Ontario feel they have it to offer right now."

Berti points to the small, European country of Luxembourg, which, in February, became the first in the world to introduce a free, national public transit service for its population of 628,000.

The annual cost to run the service, estimated in the hundreds of millions of dollars, is covered by government programming and tax dollars.

Though comparable in size geographically – Luxembourg covers an area measuring 2,586 square kilometres, while Manitoulin spans 2,766 square kilometres – the nation’s population dwarfs that of Manitoulin, which hovers around 13,000 permanent residents.

The grand duchy reportedly has the highest level of car ownership in Europe, and the goal with free public transit is to cut down on traffic congestion and greenhouse gas emissions, enhancing quality of life for citizens.

Similarly, UMIT believes the benefit of a no to low-cost service for Manitoulin lies in the increased health and well-being of its residents.

Establishing a permanent, public transit system is a great step to move in the opposite direction.

“This is a huge gap and a big problem on Manitoulin,” she said. “But the framework is not currently existing that lets you put up a service and sustain it without some pretty creative dovetailing and partnering that is going to make it work in the long run.”

Relief on the way for Northern highway travellers
Oct 9, 2020 4:30 PM
Comments
We welcome your feedback and encourage you to share your thoughts. We ask that you be respectful of others and their points of view, refrain from personal attacks and stay on topic. To learn about our commenting policies and how we moderate, please read our Community Guidelines.