Lifesaving 2 +1 highway model to be presented at Sudbury conference 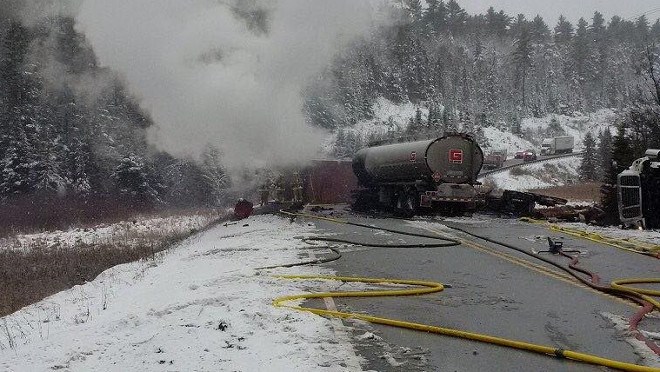 The Temiskaming Chamber of Commerce lobby group wants to reduce collisions and deaths on the stretch of Highway 11 between Temiskaming Shores and North Bay. (OPP Twitter photo)

A Temiskaming Shores highway safety group that’s pushing for the adoption of an innovative and life-saving European road model will make its case at a municipal conference in Sudbury this week.

Mark Wilson of the Going the Extra Mile for Safety (GEMS) committee will be presenting the 2 + 1 highway system at the Federation of Northern Ontario Municipalities (FONOM) northeastern conference at the Holiday Inn,  May 10.

With the concept is not gaining much traction with the Ministry of Transportation (MTO), the Temiskaming group has decided to take to the road to present its findings to regional leaders.

The committee of the Temiskaming Shores and Area Chamber of Commerce is advocating for the province to experiment with a 2+1 road pilot project in Ontario, preferably on the Highway 11 corridor.

The GEMS committee is promoting the new highway configuration that was first engineered in Sweden in the 1990s as part of that country’s Vision Zero campaign to reduce highway deaths.

The model they’re pitching is a three-lane road with continuous and alternating passing lanes every two to five kilometres. It prevents long lines of traffic from queuing behind slower vehicles and eliminates unsafe passing.

To prevent vehicles, like transport trucks, from crossing the centre line into oncoming traffic, a safety barriers, of either wire cable or steel guard rails, are placed in the middle.

Sweden has reduced highway deaths by more than 70 per cent since converting roads to the 2 +1 system 20 years ago. The Scandinavian country now has more than 3,000 kilometres of 2 +1 highways.

The model has since been adopted by a number of the European countries.

Wilson has travelled to Sweden and Ireland to meet with highway department officials in those countries. He points to a growing body of research in these countries as proof that 2 +1 saves lives.

Highway 11 is not only a major regional artery but it’s a national highway, especially for long-haul truckers who prefer this route to Highway 17 along the shore of Lake Superior.

For northeastern Ontario residents and businesses, the highway is an economic lifeline. When the road is closed for lengthy periods due to accidents, the only alternative route is a long detour through western Quebec.

Provincial highway crash statistics that Wilson was able to obtain showed 948 collisions in the 133-kilometre stretch between North Bay and Temiskaming Shores in the last eight years, 16 of those were fatal.

He said 40 per cent of the traffic flow on the highway are commercial trucks, and with the resurgence of mining and agriculture in the area, Wilson fears the situation will get worse.

The chamber knows that four-laning is out of the question.

Highway 11, north and south of Temiskaming Shores, runs anywhere between 6,500 and 7,500 vehicles a day, depending on the season.

As an alternative, the chamber group presented the ministry with the 2 +1 concept.

In response, the MTO contracted engineering firm WSP to conduct a performance review of the Temiskaming Shores-to-North Bay stretch, and to study the feasibility of implementing the 2 +1 model.

The outcome of an April 2 meeting in Temiskaming Shores, where WSP and the ministry presented their findings, was not what the chamber group wanted to hear.

“The study concluded that the 2 +1 road system was not feasible for the Highway 11 North at this time,” MTO spokeswoman Kristin Franks replied by email to Northern Ontario Business.

According to Wilson, the consultants indicated the idea has merit, recognizing the reduction in fatalities in Sweden, but the consultants had misgivings about applying European standards to Ontario highways.

The way WSP sees it, the road base would have to be widened from 12.5 to 13 metres, currently on Highway 11, to 16 metres, the equivalent of adding an extra lane.

A cost-benefit analysis was not part of the review.

In examining the European model, the consultants had further concerns about a reduction in shoulder size and the ability to pass a disabled vehicle. The centre barrier was also identified as posing a major risk in causing more collisions.

Franks said “the ministry will continue to evaluate the application of the 2 + 1 model as median barrier systems evolve.”

From his research, Wilson counters there is no evidence to support that conclusion.

Overall, the consultants found parts of the highway performed well for what it was designed to do, but there is room for improvement in other places.

The ministry’s answer to mitigate the chamber group’s concerns is to add more passing lanes and rumble strips.

Undetermined, Wilson and the GEMS group are going the political route and intend to present the concept region-wide.

Wilson added his group was only provided with a summary of the WSP report in a PowerPoint presentation. They’ve asked to see the full report.

The ministry said it is establishing a Team Highway 11 North Working Group with representatives from the MTO, Ontario Provincial Police, the City of Temiskaming Shores, and other stakeholders to share information and find ways to improve safety.