A new aviation entity with heavy-lift cargo capability is taking to the skies of Northern Ontario this fall. And the man behind the stick is a familiar face.
0
Aug 9, 2012 6:10 PM By: Ian Ross 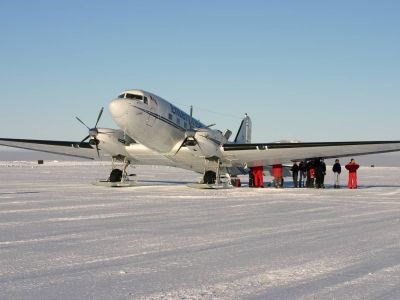 The Basler Turbo 67 is a refitted and updated DC-3 that will soon be making an appearance in Ontario's Far North this winter.

A new aviation entity with heavy-lift cargo capability is taking to the skies of Northern Ontario this fall.

And the man behind the stick is a familiar face.

Canadian aviation pioneer Frank Kelner of Thunder Bay has formed Cargo North, an investment group, that is poised to be on the front lines of mineral exploration and development in the Far North.

The outfit has bought a Basler Turbo 67 (BT-67) and expects to have the aircraft in service for cargo and fuel hauls by early November.

Manufactured by Basler Turbo Conversions of Oshkosh, Wisc., the BT-67 is a refitted, modern version of the DC-3, considered one of the most reliable and versatile cargo and passenger aircraft ever built.

“It's a new aircraft when it comes out of the factory,” said Kelner, whose company has options to acquire two more early next year.

The $7-million aircraft comes with state-of-the-art navigation and electronic gear, a stronger airframe, a lengthened fuselage, and a payload capacity of 11,000 pounds, more than double that of the DC-3.

“It's got some amazing features with a completely modernized cockpit and wiring system,” said Kelner.

With more fuel capacity for a longer range, the former piston-driven aircraft has been updated with twin Pratt & Whitney turboprop engines.

“What's nice about these turbines is you put one engine in reverse mode and you can handle a crosswind a lot easier than with a piston DC-3. It slows down in no time.”

The interior of the Basler Turbo 67

Heavy equipment can be lifted and swung aboard with a boom arm and pulley on the aircraft. “We're pretty self-contained,” said Kelner.

Kelner plans to put it to the test right away.

“Right out of the gate we're going to have five crews on the aircraft. This aircraft will fly 24 hours a day. We're not going half-assed, I'll tell you that.

“If a customer wants to fly 10,000 drums onto a (frozen) lake somewhere, we'll fly in the night before on skiis with our own Kubota (tractor) onboard, drop the equipment, fly back to base while crews brush out a runway overnight, and the aircraft arrives back on wheels to carry a larger payload. We look after it all for the customer.”

Kelner is a well-known figure in Northern Ontario aviation circles with more than 30 years of experience with jets, turboprops and the air cargo business.

As founder of the Kelner Group, among his interests are V. Kelner Helicopters and Pilatus Centre Canada, the Canadian distributor for Pilatus PC-12 aircraft.

With mineral development advancing in the Ring of Fire, Kelner said the opportunity to dive in was too good to pass up.

“I've been watching up north for the last six, seven years and nobody's got any heart and soul into keeping the customers happy, from what I can see. And my phone kept ringing all the time. In the old days, we always kept people happy, and we've done very well for ourselves.”

Kelner confirms he has some ventures cooked up with mining companies this winter that will leave any competitors behind in the dust.

His group has also formed an operational alliance with Nakina Air Service and North Star Air which gives Cargo North access to key staging bases to be closer to their northerly clients.

“Cargo North is dedicated to these two companies. If North Star has a big job up north, they have the first opportunity to get this new aircraft as well as Nakina. Both companies are entitled to the aircraft.”