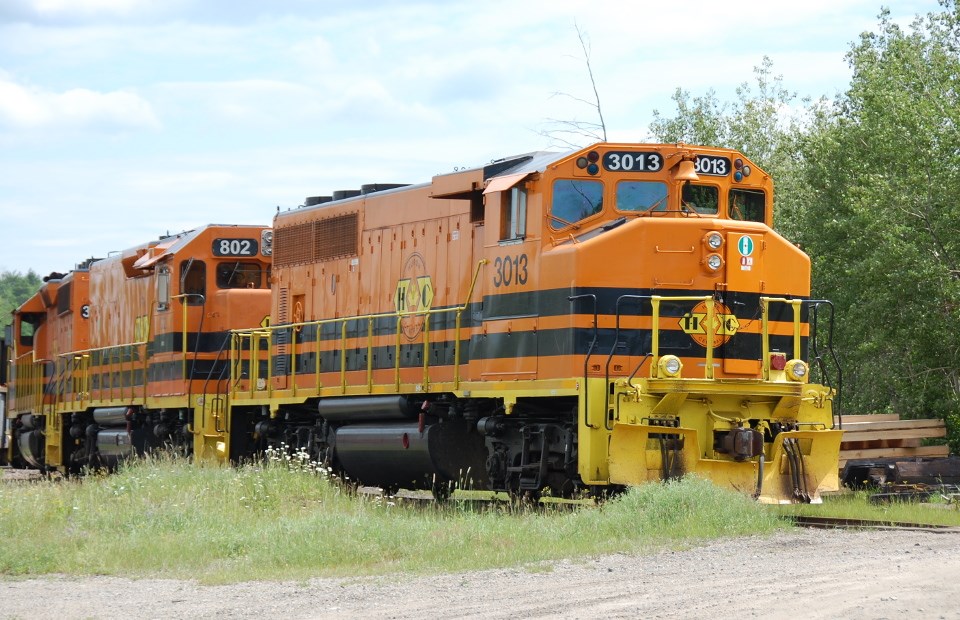 A Sudbury rail services company would like to partner with Ontario Northland Railway to maintain continuity of freight rail service on the Huron Central Railway should the line's operators, Genesee & Wyoming Canada, drop service before Christmas.

Milad Mansour, president of Milman Industries, and Jason Carriere, vice-president of Diesel Electric Services, a subsidiary company, want to talk to the Ontario Northland Transportation Commission about working out an arrangement that would see the creation of a potential service and track maintenance partnership to take over service on the Sault Ste. Marie-to-Sudbury short line.

Genesee & Wyoming Canada are in negotiations with the provincial and federal governments to work out an agreement to keep steel and forest products moving in northeastern Ontario before the railway's self-imposed Dec. 18 deadline to discontinue service. More than 40 railworkers in Sault Ste. Marie, Sudbury and McKerrow would be affected.

The Montréal-based subsidiary of Genesee & Wyoming of Connecticut want the federal and provincial governments to package a $40-million subsidy for maintenance and safety upgrades to the track, similar to a deal reached in 2010.

The 278-kilometre line moves products for Algoma Steel in the Sault, Domtar in Espanola and EACOM in Nairn Centre. CP Rail, the track's owners, leases the line to Genesee & Wyoming. The lease agreement runs through 2040.

Carriere and Mansour have made it no secret they're eager to push the Montréal railroaders aside and take over the business.

They said they've shared their plans with both levels of government for a "phased approach" to build freight volume on the line, and have floated the idea of restoring passenger rail service that was discontinued in the late 1970s.

Mansour claims he's even prepared to inject his own capital into the line, but, ultimately, he said, the government needs to invest in track infrastructure as well, such as the crossing upgrades, once his company has completed an analysis of track conditions.

With 18 locomotives at their disposal and a track maintenance division, Mansour and Carriere said they're waiting on Queen's Park and CP Rail to give them the green light to step in.

Late last year, the province provided interim funding of $980,000 to keep Genesee & Wyoming in place for another year in order to work out a long-term solution.

A September tour of Diesel Electric's facility in Sudbury by provincial Finance Minister Rod Phillips gave the company some encouragement that Queen's Park is willing to look at alternative carriers should a funding deal not be reached with Genesee & Wyoming.

Now the Sudbury company said they're also reaching out to Ontario Northland on a possible alliance.

"We're certainly open to working with them and there's an option for that line," said Carriere.

"I think, in some capacity, we can work with them. We have the track division, we've run trains on that line. The one thing we do not have is an RTC (Rail Traffic Controller), but Ontario Northland does. That's something we can be hopeful of tapping into."

Carriere said they have not spoken to Ontario Northland and its president and CEO Corina Moore since last year. Renée Baker, a spokesperson for the North Bay-based Crown agency, confirmed "there have been no recent discussion with Diesel Electric Services."

"Ontario Northland has provided rail services to Northern Ontario for over 100 years. We are focused on delivering our current mandated services, which includes providing rail repair, maintenance and operational support to external clients, including North America’s leading railways."

Genesee & Wyoming told Northern Ontario Business last year that it invests a percentage of freight revenue generated from the line back into track infrastructure. But it's now faced with more onerous costs due to federal-mandated crossings upgrades.

Carriere and Mansour said based on their discussions with staff in federal Transport Minister Marc Garneau's office and with provincial officials, as high as Premier Doug Ford's office, there will no public funding for Genesee & Wyoming if the company is not prepared to sink more of its own capital into the track.

"On the federal level, we spoke to Garneau's office and they said they are certainly open to working with any other carrier," said Carriere. "There's us and there's CP Rail."

Genesee & Wyoming said it will not comment on the content of these discussions out of respect for all parties. They pledge to maintain full employment and service until the final train in December.

"At this time, we are continuing to work diligently and discussing with both levels of government to find a solution to avert the shutdown," said André Houde, the railway's vice-president of human resources and administration.

As to their Dec. 18 closure date, Houde added: "All relevant stakeholders have been advised."

However, the optics of Genesee & Wyoming being owned by wealthy multi-national owners of Brookfield Partners and GIC, a Singaporean fund, combined with repeated threats since 2009 to discontinue has worn thin with some Northerners.

The Greater Sudbury Chamber of Commerce dispatched a letter urging provincial Transportation Minister Caroline Mulroney and Garneau to deny giving a "handout" of taxpayer dollars to Genesee & Wyoming and, instead, opt for a made-in-the-North solution.

"There are other private sector companies in Northern Ontario that would be well-equipped to manage the HCRY (Huron Central) on a similar lease agreement with Canadian Pacific, and we believe the government should support a Northern Ontario-based solution," reads a letter by chamber president-CEO Debbi Nicholson.

With the deadline slightly more than a month away, Carriere felt confident they could deploy quickly, running under CP's rail operating certificate, and in conversations with shippers assured them they can quickly stage resources out of Sudbury.

"Don't buy into this whole Huron panic again. We've got some great ideas to grow the line. If the government is going to invest, let's make it worthwhile. Let's do something with the line."