Partnerships being struck with communities, companies
Dec 18, 2017 9:27 AM By: Lindsay Kelly 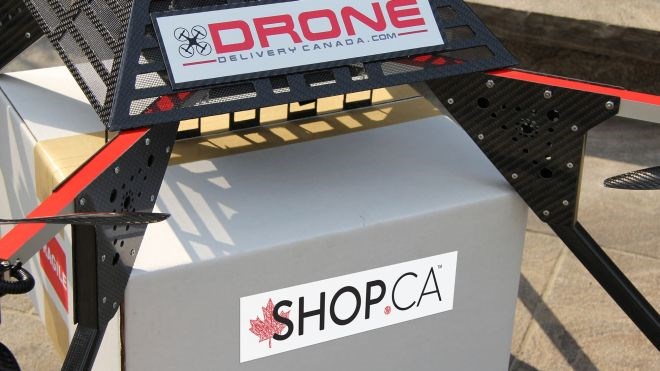 Drone Delivery Canada (DDC) is attracting some enthusiastic buzz around its proprietary drone delivery platform, which is currently testing the benefits of its system in transporting goods to Canada’s remote communities.

But the attention wasn’t always friendly.

“When we came up with this concept back in 2013, people thought we were, literally, nuts; we were crazy,” said Tony Di Benedetto, CEO of the Toronto-based company. “They said it’ll never happen.”

Four years later, the company has private partnerships in place, commercial testing is set for the second quarter of 2018, and no one is calling them crazy anymore.

But for the first phase of implementation, DDC is concentrating on transporting goods such as mail, medicine and groceries to remote Indigenous communities in Ontario’s Far North. Under an agreement with the Moose Cree First Nation, DDC has been flying test missions of up to 2.12 kilometres, while maintaining line of sight, in the communities of Moose Factory and Moosonee, located on the shores of James Bay.

Current transportation options to the area – air, water, or winter road – are limited and unreliable, and the cost of goods, once they arrive, is astronomical. A drone delivery system promises to reduce cost and increase access for community members through one of two delivery models: depot-to-depot or depot-to-customer.

In November, DDC reached a new milestone after completing several successful test flights, undertaken with permission from Transport Canada, which regulates the industry. DDC wanted to assess how well the drones performed in strong winds, snow and cold temperatures. But it also had to make sure it wasn’t disruptive to the existing airspace, where up to 150 plane and helicopter flights occurred in one day.

“We were able to mobilize ourselves, execute successful flights, while operating or coexisting in an existing aviation, busy sky,” Di Benedetto said.

“That was really important for us, and very important to the regulator, to make sure that our systems are working and that we can coexist together in an environment.”

DDC drones follow predefined flight paths that are coordinated between the communities and other stakeholders, and the entire process is closely controlled and monitored by Transport Canada to enforce safety for everyone involved.

“What scares a lot of regulators is how do you control the skies?” Di Benedetto said. “In our world, we’re building a system to ensure strict standards that adhere to aviation policies that already exist.”

Though a regulatory framework is still in development, Di Benedetto said Transport Canada will likely put Drone Delivery Canada under the same classification as an airline – the company owns the fleet, provides air traffic control services and oversees the operation, but the drones would be run by local operators.

That means job opportunities for community members. Di Benedetto said the company is planning to potentially create a drone pilot program, in conjunction with university partners, to train youth in the industry. He noted that students at the local high schools, where he recently spoke about the company’s plans, embraced the possibilities.

The company is also working with 40 to 50 private companies – among them Staples and Napa Auto Parts, along with health-care providers, logistics companies and heavy cargo companies – that see an opportunity to sell to new markets, which Di Benedetto believes will increase competition and drive down prices.

Announcements of more community partnerships are expected in the coming months.

“Not only are we utilizing this technology to put Canada on the map on a global scale – because, realistically, if we get this thing off the ground for (2018), we'll be the first in North America to be doing this – but we're also helping people,” Di Benedetto said.

“There's a real problem that exists, and we think this is the technology that can fix it.”